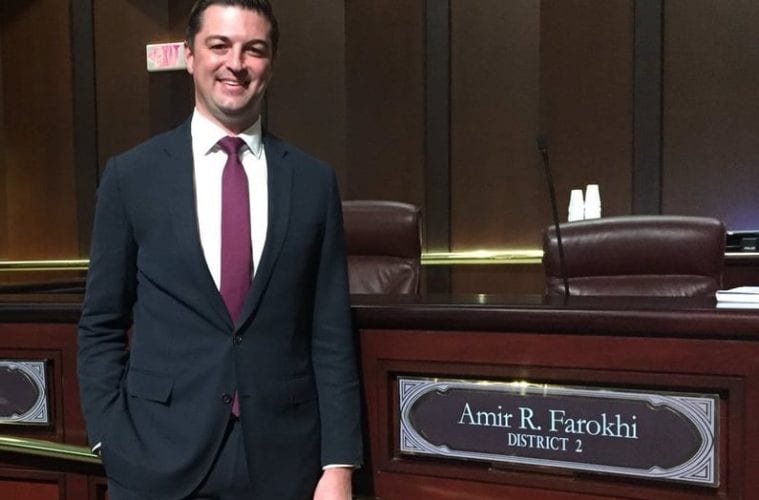 Atlanta City Councilman Amir Farokhi says he hopes the city will be able to offer more financial help to arts organizations struggling from the coronavirus pandemic.

The federal stimulus will help Atlanta’s arts organizations; much more is needed

Financial help is on the way for Atlanta’s arts community, which has largely been shuttered due to the COVID-19 crisis.

Local arts and culture groups should experience some trickle-down from the $2 trillion stimulus package just approved by Congress and signed into law. It includes $75 million to the National Endowment for the Arts [NEA] and will allow nonprofits to apply for disaster loans from the federal Small Business Administration.

In Atlanta, the Mayor’s Office of Cultural Affairs has released funds to arts organizations that have received grants from the city. After an initial payment of money early in the year, the city typically sends the second payment in July. That second check has already gone out.

“We thought the most important thing right now is getting money into the hands of the arts community,” Camille Russell Love, executive director of the agency, said at a town hall gathering of Atlanta’s arts leaders last week.

Those federal and local funds are significant, but arts leaders warn that more will be needed.

With restrictions on public gatherings in force until at least the end of April and possibly into June and beyond, the financial hit on arts organizations in Atlanta and elsewhere will be staggering.

The losses to arts organizations nationwide is estimated to already be $3.6 billion and growing, according to Americans for the Arts, and the impact will be significant. Moody’s Rating Service, for example, has just downgraded the bond credit rating of New York City’s famed Metropolitan Opera to “junk” status because of $60 million in losses due to lost box office revenues caused by the pandemic. Camille Russell Love says the city has sped up its grant payments to arts groups to help them through this crisis.

Moody’s has said that arts and cultural institutions across the globe will be under financial pressure from diminished earned income, fundraising and endowments.

Atlanta City Councilman Amir Farokhi, who organized the town hall meeting, said he hopes the city will be able to do more. “I’d love to see the city consider modeling what Seattle has done; they allocated $1.1 million to the arts,” Farokhi told ArtsATL. “But there’s a lot of competing voices calling on the city right now. We have to see what impact all this is going to have on the city’s revenue streams.”

Doug Shipman, president and CEO of the Woodruff Arts Center, echoed Farokhi’s thoughts. “I hope Atlanta — both through philanthropy and the city — will think hard for a specific package for our arts and culture,” he said.

Farokhi said it is still unclear how much of the stimulus package will trickle down. “But arts and culture organizations need to feel empowered to apply for funds,” he said. “They are also for nonprofits. They need to apply now.”

The Georgia Center for Nonprofits has gathered numerous resources and tips for navigating through the federal programs. The organization will host an online town hall at 11 a.m. Wednesday, April 1, for nonprofits. Pre-registration is required.

Americans for the Arts has also set up an online resource center.

Potential resources for arts nonprofits include disaster loan assistance from the federal Small Business Administration. A small business or private nonprofit is eligible to borrow up to $2 million for economic damage.

Invest Atlanta offers a zero interest emergency loan for businesses through its Business Continuity Loan Fund. Loans range from $5,000 to $30,000 and payments can be deferred for up to 12 months.

In terms of federal assistance, Americans for the Arts said that arts organizations and arts workers will be eligible for several components of the stimulus bill. Those include:

— $5 billion in Community Development Block Grants to cities and counties.

— $10 billion in Emergency Economic Injury Disaster Loans of up to $10,000 each for small businesses and nonprofits for paid sick leave, maintaining payroll, mortgage/rent payments and other operating costs.

Americans for the Arts President and CEO Robert Lynch said in a press release that the federal stimulus legislation is a good start, but more is needed. “Nonprofit arts organizations are the lifeblood of our communities,” he said. “My concern is that it isn’t enough to keep many small- and medium-sized arts organizations afloat when . . .  their doors will likely be shuttered for weeks and even months.”

Farokhi said he will push for the city to step up and give as much financial help as possible. “You can tell a city’s priorities based on how it spends its money,” he said. “Atlanta is an arts and culture powerhouse that commands worldwide attention. That community does not operate in a vacuum. It needs our support.”