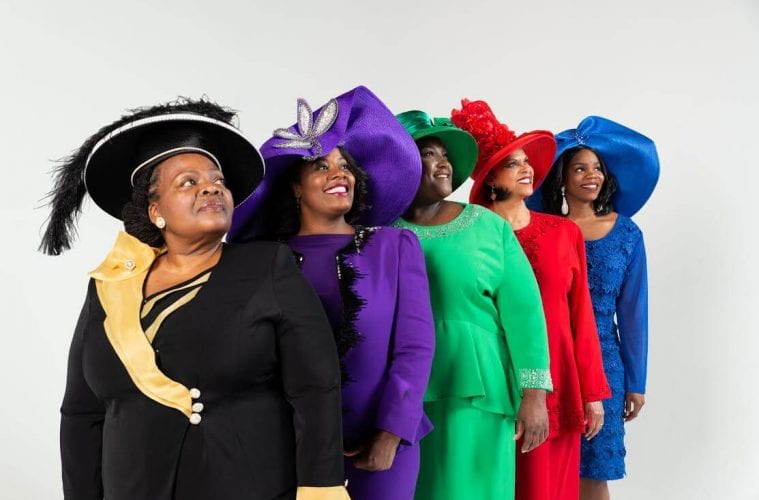 Review: An ode to the traditional black church, “Crowns” serves up powerful mix of gospel music and “hattitude”

Hats and religion have a complicated relationship, especially when it comes to women. They have been used as a device to impose modesty on women by keeping their heads covered, and they also serve as a fashion statement and status symbol. A hat can be a simple accessory to complete an outfit, and other times it is a declaration of war — especially if two women wear the same one on the same Sunday. As Regina Taylor wrote in her musical Crowns, which Dominion Entertainment group is staging at Southwest Arts Center through June 10, “Sometimes hats reveal and sometimes they conceal.”

Crowns premiered in 2002 at the McCarter Theatre in New Jersey right when America was finding religion again post-9/11 and on the heels of the declaration of war against Iraq. It was perfectly imperfect timing to stage a gospel musical that celebrates African traditions in the Black church and the history (and hattitude) of headpieces. Based on the photography book of the same title by Michael Cunningham and Craig Marberry, this oral history of hats is delivered as a series of vignettes by various types of women in the church — from the first lady to the church mother.

This jukebox gospel musical is strong on songs and sequins, but weak on plot. Yolanda (Tyler Prynce), a teenager from Brooklyn, is sent to down South to stay with her grandmother, known in the Pentecostal church as Mother Shaw (Sandra Jones), and gains an appreciation for church through the stories of the women and their hats. The plot is easy to forget and is barely held together; the story is merely a means to transition between songs.

The music is where the show shines, and this production directed by Thomas W. Jones II is no exception. Though the acting chops in this cast are not evenly distributed, they are all outstanding singers, delivering beautiful renditions of hymns including “His Eye Is on the Sparrow,” “When the Saints Go Marching In” and “In the Morning (When I Rise).” Jennifer Myles, who plays Velma, delivers a stirring rendition of “This Joy That I Have (The World Didn’t Give It).” Also packing powerful vocals are Brittany Inge, who starred in the musical Blackberry Daze at Horizon Theatre last summer, as Jeanette, and Terry Burrell, who was just onstage in Candide at the Alliance Theatre, as Mabel. Andrea Connor and Eric Moore round out the cast.

Moore’s presence as the preacher and only man in the cast is makes a not-so-subtle statement about gender roles in the church with all of these smart, strong women hanging on the words of a man whose sometimes wandering eye must be tamed by prayer cloths. Taylor hints at this dynamic throughout the show, but never really goes there. For example, when one of the women talks about marching in the 60s, she says, “It took a civil rights movement to get those hats off of our heads,” but then the show quickly moves to the next scene. On the flip side of that gender dynamic, church was also one of the first places to acknowledge black beauty. For decades, black women didn’t see themselves in fashion magazines, so the church aisles became the runway.

In this production, the “runway” is a simple set, anchored by a large color wheel at center stage that looks like stained glass windows. Three tall hat racks sit onstage along with rainbow-colored stools that serve as church pews and storage containers. The drummer and piano player are visible, much like they would be in church. And Mary Parker’s lighting is absolutely beautiful from beginning to end, especially in a baptism scene.

As much as the story wavers, Taylor had tapped into something about the way that people’s relationship with church was changing that the church wasn’t ready to acknowledge. Hebrews 8:13 says, “God is the same today, yesterday and always,” but the black church is not the same. There are still a lot of churches like the one depicted in Crowns, especially in the South, but they are fading. Hymns are getting harder to come by, and once groundbreaking gospel singers, like Kirk Franklin, have become the inspiration for newer artists like Chance, the Rapper. In the case of the younger women in Crowns, the impact of ancestry never leaves, but the attachment to tradition loosens as they get closer to their own truths.

If Crowns seemed like an ode to old-time religion in 2002, it seems even further away now. Still, these hats are more than just accessories to wear at church, because each hat holds memories and tell stories about love, marriage, work and everything in between. And, as much as things are changing, something that remains the same is that it’s not about the hat, it’s about the woman wearing it.