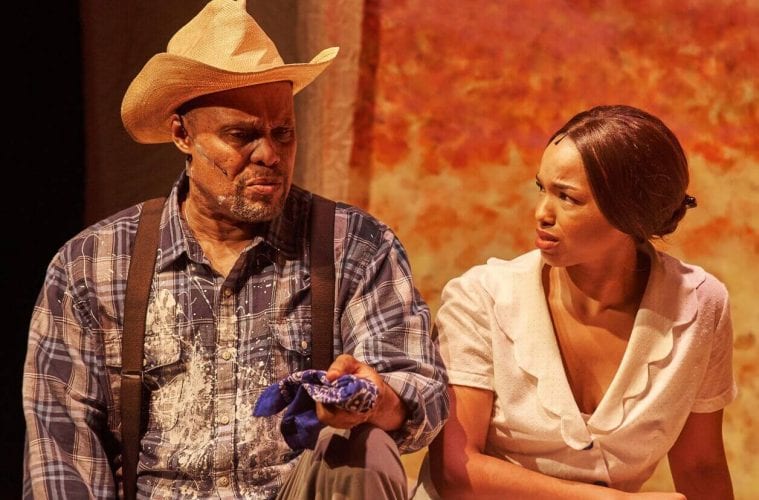 Review: “110 in the Shade” has good musical moments, but struggles to find its footing

It’s the Fourth of July in a small Texas town, circa 1936, and the locals are longing for some rain and relief from the blistering heat that has encompassed the area. When a mystery man shows up, he offers not just the possibility of rainfall, but the potential for love for a young woman whose heart is suffering from its own kind of drought.

Based on N. Richard Nash’s play The Rainmaker, the musical 110 in the Shade — being staged through June 24 by Theatrical Outfit at The Balzer Theatre at Herren’s — doesn’t have the gravitas of some of the company’s other musical productions, but does have some undeniable pleasures, most notably leading man Jeremy Wood.

Besides dealing with weather issues, Rancher H.C. Curry (played by Robert John Connor the night I saw it, filling in for LaParee Young) is awaiting the return of his daughter Lizzy (Ayana Reed). She has been visiting friends of the family in the hopes of finding a husband, but that has not worked out. Her brothers Noah (Lowrey Brown) and Jimmy (Edward McCreary) want to set her up with local Sheriff File (Eugene H. Russell IV). Having gone through his own marital problems — his wife ran off — File does not want to get hurt again.

Everything changes with the appearance of drifter Starbuck (Wood) who promises rainfall within a day. H.C. gives him money to end the drought, and the townspeople are enchanted and motivated by the newcomer. Only Lizzy seems to see through Starbuck, yet she is nonetheless drawn to him.

110 in the Shade made its Broadway debut in 1963 and ran for nearly a year, with Inga Swenson, Robert Horton and Stephen Douglass as the central figures. Adapted and opened up by Nash, it featured lyrics by Tom Jones and music by Harvey Schmidt, fresh off of their success with The Fantasticks. The musical is also well known for its short-lived 2007 Broadway revival starring Audra McDonald in a Tony-nominated role.

Truth be told, however, it’s not a great show. The supporting cast is largely undeveloped, and the songs are an eclectic, uneven lot. For every joyous number, there’s another that seems superfluous.

As directed by Tom Key, this is a no-frills version. Thomas Brown’s set is almost bare, and the show never seems as theatrical or as alive as it could be.

Luckily, the ensemble is populated with some talented folks. Connor, Russell, McCreary and Brown lead a likable supporting cast. Galen Crawley plays Snookie (a role originated by Lesley Anne Warren), and she and McCreary have a delightful number –“Little Red Hat” — that seems strangely out of place with everything that has preceded it, but at least it’s fun.

110 In the Shade is normally a terrific vehicle for its leading actress. Reed is a dynamic singer and has some stellar moments, including a wonderful solo take of “Simple Little Things” and a nice duet of “A Man and a Woman” with Russell. Yet when she’s not mid-tune, she wildly overdoes her Southern accent. The character just never seems real.

What gives the production its largest boost of energy is Wood. From the moment Starbuck appears, the musical takes on a different tone. Wood shows up and gives heft to a musical that frankly hasn’t had much of a pulse beforehand, joining forces with almost the entire ensemble in Angela Harris’ impressively choreographed and lively “The Rain Song.” Some of the actor’s subsequent scenes with Lizzy are sweet and endearing, as he tries to convince her that she is beautiful. Wood almost singlehandedly saves the show. His “Evenin’ Star” number is another highlight.

Anyone expecting another musical gem from Theatrical Outfit along the line of their The Light in the Piazza or their co-productions of Memphis and In the Heights with Aurora Theatre might be disappointed in this. It’s a show that, like Lizzy, struggles to find its footing, but thanks to Wood and some engaging musical numbers (under the music direction of S. Renee Clark and her band) and performers, 110 in the Shade offers some low-key charm.