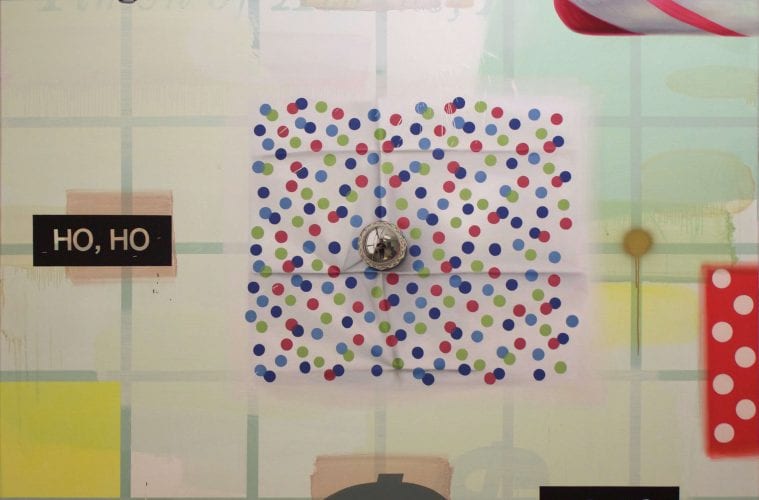 For nearly a decade, Atlanta artist Craig Drennen has structured his practice around what he has called “Shakespeare’s worst play,” Timon of Athens, about a wealthy Athenian whose overzealous generosity transforms him into a destitute misanthrope. Many critics have more gently termed Timon one of Shakespeare’s “problem plays,” a work characterized by often puzzling ambiguity and extreme shifts in tone; it ranks among Shakespeare’s most seldom-produced, seldom-considered works. (This isn’t the first time Drennen has employed a wily strategy for making artworks based on a somewhat disregarded, existing cultural product: he previously spent five years creating paintings, drawings and performances based on the 1984 film Supergirl, often considered one of the worst movies ever made.)

Despite whatever elaborate interpretations such projects may tempt, the body of work Drennen has produced related to Timon takes a relatively straightforward approach to Shakespeare’s text. For each character listed in the play’s dramatis personae, Drennen creates a series of works in an individuated style, drawing on the character’s role, as well as the contemporary associations it prompts for the artist.

For his latest feat of character adaptation, Drennen has taken on the Banditti, three figures who enter the action of Timon for a brief moment during the play’s fourth act. Like the Mistresses who inspired Drennen’s 2007 “anti-portraits” of anuses, the Banditti are by no means primary characters, yet they are the focus of BANDIT, Drennen’s Working Artist Project exhibition on view at the Museum of Contemporary Art of Georgia through January 27. As he drew upon surprising sports imagery in his 2014 Poet series, in BANDIT Drennen prominently features depictions of Santa Claus alongside more obvious images of dollar signs and moneybags. The choice to correlate the figure of Santa Claus with the Banditti invites speculation, but perhaps an explanation would deaden the madcap and macabre Christmastime world Drennen has created. Some inchoate connections emerge: burglars are notoriously active during the holiday season, and the more whimsically inclined among them could do worse than — like the Grinch — dressing as Santa. With some of the paintings in BANDIT appearing like elaborately wrapped packages and others showing bags of cash, a satire on commercialism, while present, is almost too obvious and one-dimensional.

In Shakespeare’s play, the Banditti come to rob outcast Timon of a golden trove he has discovered in the wilderness. Perplexingly, he gives them the gold and exhorts them to plunder Athens, saying that everything in the world is a thief. (This strange speech is the source of the title for Nabokov’s novel Pale Fire; Timon says moonlight is “pale fire [snatched] from the sun.”) By inserting the imagery of Santa Claus and holiday commercialism into this moment of perverse gift giving, Drennen highlights some of his literary subject’s core questions. In matters of money, how do you balance charity and cynicism? What authority does wealth afford? Can generosity be destructive? These are also, of course, urgent questions for contemporary art.

Shakespeare’s text provides an overall structure that is subsequently populated (and sometimes subverted) by Drennen’s idiosyncratic choices, producing a tussle over authorship and artistic vision. While it is likely safe for Drennen to assume some familiarity with Shakespeare on the part of his viewers, many have never read, seen or even heard of Timon of Athens. Upon encountering Drennen’s work — whether the basketball-themed Poet pieces or the oil paintings of daisies dedicated to the Flattering Lords — a viewer can experience a sense of dislocation engendered by this strange mixture of familiar and obscure sources, a conceptual unmooring. Informed by both the most famous playwright in the English language and a contemporary artist born in West Virginia three hundred and fifty years after his death, the resulting artworks truly belong — in a sense of undiluted artistic ownership — to neither of them.

By wrestling with Shakespeare over Timon, then drawing the viewer into the fray, Drennen plays with the notion of individual artistic vision. Some works may reveal their creator on sight, but Drennen’s output is deliberately inconsistent and varied. If works based on multiple characters from Timon were assembled in an exhibition — as they were in Poet & Awful at Boston’s now-defunct Samsøn Projects in 2014 — the result would appear like a group show, and a wildly far-ranging one at that.

The works in BANDIT, like the rest of his ongoing Timon of Athens project, suggest that Craig Drennen sees the world (or at least a large part of it) through the history of painting. While being propped up by the scaffolding of Shakespeare’s text, the paintings in BANDIT also show Drennen giddily hopping through the history of painting from the 15th century until the present moment, winking at everything from trompe l’oeil to the modernist grid as he goes. Drennen incorporates both things in the large square painting Bandit 1, which shows rectangular shapes and bold, graphic dollar signs arranged irregularly across a grid. Some of these shapes resemble boxes wrapped in polka-dot patterned paper, some serve as the field upon which images of candy cane fragments appear to float, and others remain vague painterly swathes of color. Drennen positions images of five spherical ornaments at intersection points of the underlying grid throughout Bandit 1. Each of these ornaments shows a painstakingly rendered miniature painting of Drennen taking a selfie, appearing as if reflected by a three-dimensional ornament’s mirrored surface. (These selfies, like the photorealistic depictions of Polaroids in Drennen’s Painter series, demonstrate a fascination with the ever-changing dynamics between painting and photography.) Each ornament contains a distinct image, giving the impression that these selfies were taken at different moments. When the ornaments appear atop polka-dotted packages, as three of the five do, they also reflect that pattern in addition to Drennen’s likeness. When asked in a 2011 interview with New American Paintings about his choice to employ trompe l’oeil instead of incorporating physical objects into his work, Drennen replied, “It’s not that I am opposed to collage or assemblage, but until they make an adhesive that can withstand five centuries, this is my solution . . . I feel a crisp slap of the glove when looking at a Baroque painting.” By now either Drennen has tracked down such an adhesive or changed his mind: a flaccid strip of tinsel dangles from the surface of Bandit 1, and each of the two Winter Bandit paintings feature, in addition to silver tinsel drooping into a mound on the floor, small artificial Christmas trees affixed to the wall. Balls of aluminum foil are also fastened to multiple paintings in the show, sometimes appearing as unvarnished marks along a grid, as in Bandit 2, or painted white to give the impression of thickly falling snow, as in the Winter Bandit paintings. Tinsel also appears festooned across Gray Bandit (Ho Ho) and Gray Bandit (Inaudible), a pair of paintings composed by five-by-five square grids and dominated by grayscale tones. The parenthetical subtitle of each Gray Bandit painting appears on its canvas in capitalized white text across a black bar, as in movie subtitles, and each shows the head of a cartoonish Santa figure with his eyes crossed out gazing blankly out of a shadowy corner. The same figure appears more fully in Bandits, triplicate corpse-like sculptures with their arms splayed and inert heads awkwardly shoved against a nearby wall. Though Drennen appears to generally conflate the characters of the Banditti into the single Santa-like figure of the Bandit, this plurally titled work restores Shakespeare’s original trio.

The two Gray Bandit paintings, like the similarly subtitled Winter Bandit (Inaudible Dialogue) and Winter Bandit (Ho Ho Ho Ho Ho), hint at a persistent quality of inversion in the exhibition, with several works closely resembling a slightly modified counterpart. This duality also evokes Drennen’s large-scale project of building an original artistic language from an existing literary text, a sense of never being either or but always both and more. Whether he plays with Shakespeare or superheroes, basketball or Santa Claus, Drennen’s real triumph here is his joyful demonstration of painting’s capaciousness, its seemingly infinite ability to contain multiple cultural and personal worlds.