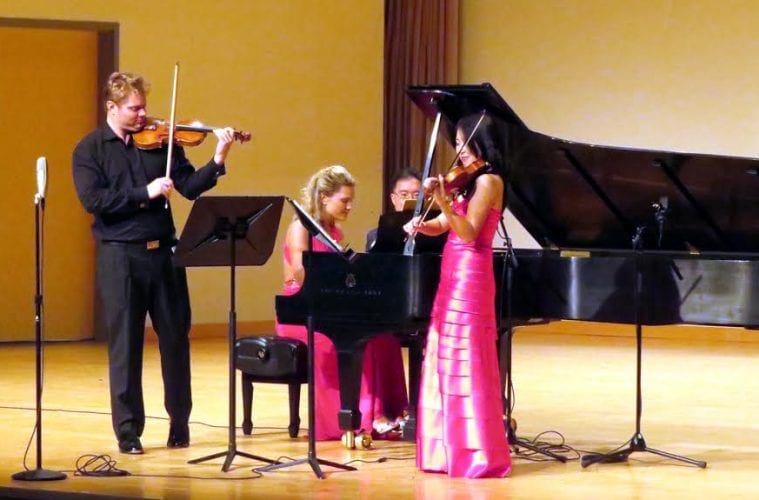 Review: The Coucherons, Kims put on a sizzling sibling showcase of violin and piano at Kennesaw Despite being billed as “Dueling Duos,” the performance by the Coucheron duo (David Coucheron, violin and Julie Coucheron, piano) and the Kim duo (Helen Hwaya Kim, violin and Michael Kim, piano) proved not competitive but collaborative in character.

Although Helen Kim has performed a number of times with each of the Coucherons and extensively with her brother Michael, this is only the second time all four of them have concertized together. The four performed a similar concert last year at the University of Manitoba in Brandon, Canada, where Michael Kim was dean at that school at the time. In the interim he moved to the U.S., having recently assumed the position of professor and director of the School of Music at the University of Minnesota in Minneapolis.

The evening’s repertoire was not all for violin and piano duo. The concert opened with Julie Coucheron and Michael Kim performing the ebullient “Hungarian Dances” Nos. 5 and 6 for piano, four hands. David Coucheron and Helen Kim followed with the Etude-Caprices for 2 violins, Op. 18, No. 1 by Henri Wieniawski, a Slavonic violinist of the mid-19th century who was one of the most notable virtuosos of his day, acclaimed for his brilliant technique and expressive phrasing. The opening numbers set an attractive welcoming tone for the audience in preparation for the substantial repertoire to follow.

Edvard Grieg’s Sonata No. 3 in C minor (1887), the last and most popular of his three violin sonatas, is overall tonally darker and less explicitly nationalistic in temperament than its two predecessors. Its bold heroic opening theme and more lyrical second theme set the tone for the work’s emotional scope. The second movement, which opens with a tranquil piano solo, worked its way from song-like to a dancing playfulness then back to a contemplative ending.

The final movement featured a fierce exchange of energized ideas between the instruments, but allowed for a yearning secondary theme to briefly intervene. In the end, in a breathless coda, Grieg transformed the movement’s furious opening theme into a jubilant, affirmative conclusion.

(A live recording of this sonata played by the Coucherons, can be heard in a trio of videos on YouTube, taken from a performance at the Maritime Museum in Oslo, Norway, as part of the 2012 Kon-Tiki Chamber Music Festival.)

After intermission, it was the Kim duo’s turn to tackle one of the most significant pieces in violin and piano repertoire: César Franck’s Sonata in A major, also one of the composer’s best-known works. Franck’s sole violin sonata, the piece is a “cyclic” work in that all movements share common thematic materials that are transformed over its duration.

Both the Grieg and Franck sonatas were truly well-rendered by their respective performers. If the notion of “dueling duos” implied competitiveness at all to the proceedings, the hands-down winner was the audience.

The concert closed with “Navarra” (1889) by Pablo de Sarasate, for two violins and piano. Like Wieniawski, Sarasate was an accomplished violinist whose own compositions were primarily show pieces designed as a platform for his impeccable technique, enhanced by their popularity of their Spanish flavor.

“Navarra” is no exception to that thumbnail generalization, and it gave both violinists, with Julie Coucheron as pianist, opportunity to cap the evening with a crowd-pleasing, flashy ending.

As for the concert’s premise of siblings who perform together professionally, Helen Kim’s thoughts shared with ArtsATL post-concert spell out some of the advantages from her personal experience. “We all have so much in common growing up in a house, practicing closely and learning repertoire together since childhood,” she says. “It is a unique perspective and privilege to have a sibling that you can be absolutely honest with at all times.”

And it is almost a given this will not be the last concert of this type by the foursome. “The concert in Canada was so well received that we thought we needed a reunion,” she continued. “We all enjoy playing together. We find that we all rarely talk in rehearsals and even if we don’t perform together frequently, it is like no time has passed. We hope to continue to perform together in the future.”