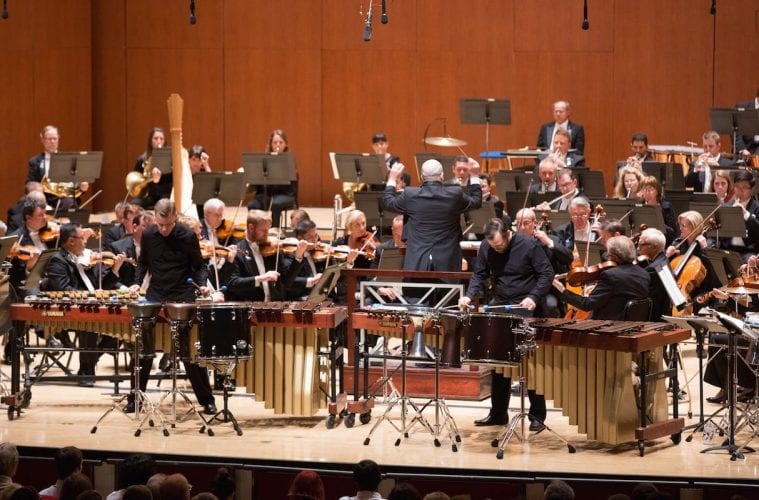 Review: Percussionists get the ASO spotlight with engaging takes on Dorman, Tchaikovsky 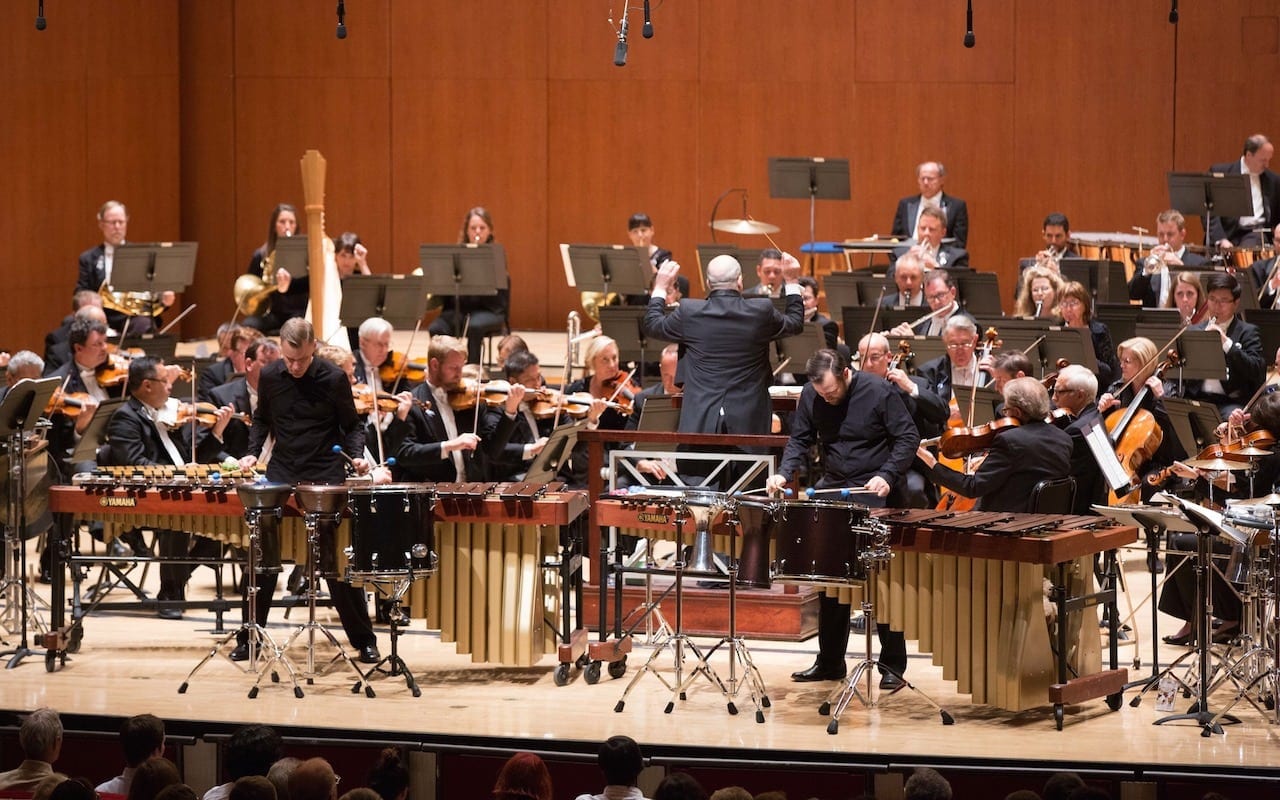 Tom Sherwood (left) and Charles Settle brought the percussion to the forefront. (Photos by Jeff Roffman)

On Thursday evening the Atlanta Symphony Orchestra performed a concert of music by Dorman and Tchaikovsky at Symphony Hall led by music director Robert Spano, featuring percussion soloists Thomas Sherwood and Charles Settle. The program will be repeated Saturday evening at Symphony Hall.

The concert opened with the 2006 concerto by Avner Dorman for two percussionists and orchestra, “Spices, Perfumes, Toxins!” The work was originally scheduled for last season, but the concert got canceled — yet another casualty of the orchestra’s infamous 2014 lockout — so it was rescheduled for this week’s ASO concerts.

In the interim, Sherwood won the audition for a section percussionist position with the Cleveland Orchestra, and is on leave of absence from the ASO for a year to play with Cleveland and decide his future. He is still officially the ASO’s principal percussionist and his role as a soloist with this work remained committed. Settle is serving as acting principal while Sherwood’s Cleveland year plays out.

Despite all that, this definitely won’t be the last time Sherwood will be seen by Atlanta audiences this fall. He and Settle will both take part in a concert on November 9 by Sonic Generator, the professional contemporary chamber music ensemble in residence at Georgia Tech, and Ensemble Variances, a French contemporary music group noted for its eclectic performances, at Georgia Tech’s Ferst Center for the Arts. 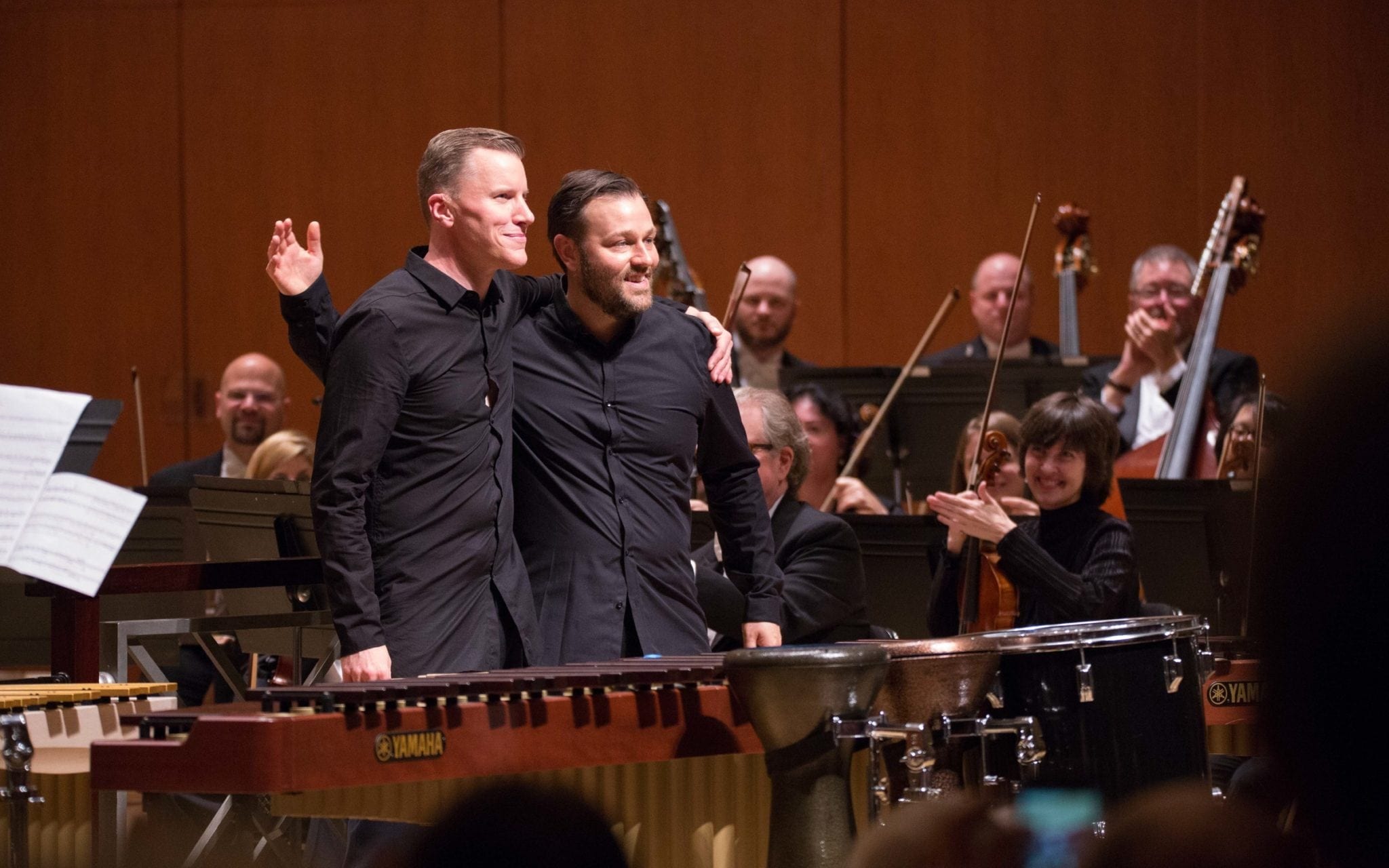 Sherwood is co-artistic director of Sonic Generator with his wife, flutist Jessica Peek Sherwood. Whatever choices Sherwood makes about Cleveland at the end of this season, whether to stay there or return to the ASO, the decision will also have a significant impact upon Atlanta’s contemporary chamber music scene, Sonic Generator in particular.

Now to Dorman’s music itself. The Israeli-American composer was born in 1975, in Tel Aviv, Israel, and his “Spices, Perfumes, Toxins!” was intended to reflect the eclecticism of his generation — more specifically, as seen through the lens of today’s young Israeli culture. Its metrical and rhythmic underpinnings seem rooted in Near East and Middle Eastern influences transformed by, and merged with, the unavoidable cosmopolitanisms of our current day popular culture.

In the middle movement, Dorman also incorporates influences of “tala” (or “taala” — a mode of rhythmic pattern repetition) of north Indian classical music as part of his cultural mix. “Spices, Perfumes, Toxins!” proved an engaging piece, quite approachable in its cumulative style.

The two percussionists each had their own battery of instruments, downstage left and right respectively, which at first glance may seem mirrors of each other but are really not. While each soloist had a marimba, a pair of high and low darbuka (a kind of “goblet drum” which adds to the work’s Middlem Eastern flavor), a tom-tom and a drum kit, there are differences. One soloist had a vibraphone and tam-tam, while the other had a glockenspiel. There were some differences in the sizes of drums in the kits as well, adding to the variety of available timbral colors.

As attractive and non-threatening as the music’s exoticisms were, and however energized its rhythmic underpinnings, the piece never seemed to allow the percussion to truly thunder, to get that “almost nothing else can do that” level of sheer visceral, physical response from the listener that is percussion’s natural birthright. That aside, “Spices, Perfumes, Toxins!” was given a winning performance by Sherwood and Settle, well supported by Spano and the ASO, which played full-out when called for, but never overwhelmed the soloists.

After intermission, the orchestra performed Tchaikovsky’s Symphony No. 5 in E minor, Op. 64. Written in 1888, it is one of the composer’s most popular works. From its solemn outset, with clarinets and low strings introducing a principal theme that would recur throughout the piece, it was apparent this would not be just a walk-through of an old favorite. Witness to that included the slow movement’s magnificent extended horn solo, played with controlled lyrical assurance by principal horn Brice Andrus.

In the last movement especially, Spano seemed to opt for sunshine over breadth. His tempos had considerable momentum yet never felt rushed. This performance was hardly out of mainstream, nevertheless it felt fresh and unburdened. It was a musically satisfying evening overall.