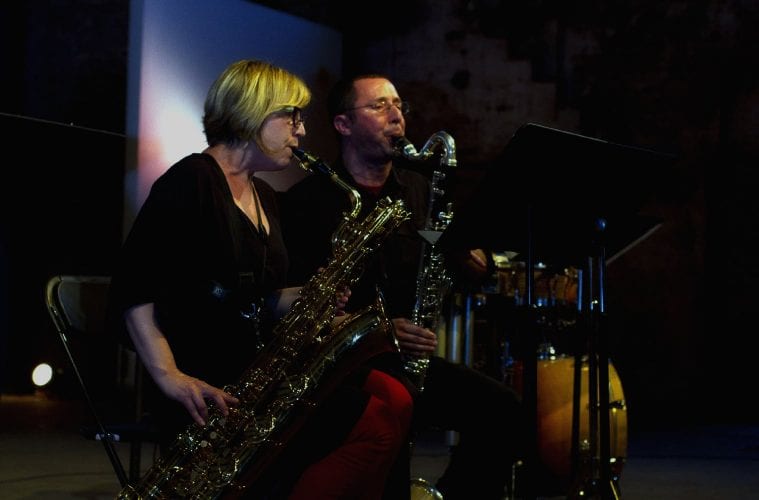 Saxophonist Jan Berry Baker and clarinetist Kenneth Long are colleagues on the music faculty at Georgia State University and performers in the new-edge musical ensemble Bent Frequency. Their new album of duets for sax and clarinet, “Citizens of Nowhere,” is made up entirely of contemporary American compositions, all but one from the 21st century and two of them commissioned and premiered by Baker and Long. The CD was just released by Albany Records.

First up on the disc is “Duo Sonata,” for clarinet and alto saxophone, by Gregory Wanamaker. Written in 2002, the piece has gotten a lot of concert play worldwide, although like most music for clarinet and saxophone, its renown remains largely within the niche of players and fans of those single-reed woodwind instruments. It has been recorded at least twice before. The second instance, by saxophonist Timothy McAllister and clarinetist Robert Spring, appeared on two different CDs in 2010.

Baker’s and Long’s rendering feels rounder in tone, more fluid and better balanced than the one by McAllister and Spring. The opening movement, “Departure,” is a rhythmically driven piece in simple sonata form. It’s followed by a slow, diatonic “Elegy.” The “Scherzo” deploys simple motivic ideas in a polymetrical context. The finale, “Arrival,” is a fast blues.

The next piece, “Citizens of Nowhere,” is by Nickitas Demos, the only Atlanta composer represented on the disc and a colleague of Baker’s and Long’s on the GSU faculty. His office, in fact, faces that of Long, and he is likewise a clarinetist. Demos was one of the original artistic directors of Bent Frequency, before Baker or Long joined the group. So the musical connections are close.

“Citizens of Nowhere” takes its name and inspiration from a 2003 article in The New Statesman by English author and political activist Paul Kingsnorth. The structure of the music is loosely based on the article’s themes, with moods that are generally unsettled and ungrounded but in the end are brought to resolution. The resolution comes, Demos says, in response to Kingsnorth’s concluding assertion: “The rest of us can join the citizens of nowhere in their empire of the placeless, or we can build new relationships with our own landscapes and our own communities. We can build on our pasts or dismiss them; bleach the human rainbow or loudly defend awkward, stubborn, unprofitable diversity. Somewhere or nowhere. The choice is ours.”

Lansing McLoskey‘s “blur” was originally composed in 2009 for clarinet and basset horn, but the music on this disc is the 2011 version for clarinet and alto saxophone for the soundSCAPE Festival in Italy. McLoskey describes the piece as “an exploration of the blotting of boundaries” between the two instruments, solo and duet, consonance and dissonance, contrasting ideas and expectations.

The CD’s penultimate track is Perry Goldstein‘s “Mischief,” composed in 2011. It was originally written for alto and baritone saxophones, but Baker and Long commissioned a new version and recorded it in May 2012, then premiered it a month later. The piece is likely the most “public” in style on the disc, a jaunty, witty dialogue for alto sax and bass clarinet. The instruments often exchange melody and accompaniment roles quickly, sometimes getting snarled in the process, or pausing together for a moment, elaborating all the while on a handful of motivic ideas.

The album closes with “We Speak Etruscan” by Lee Hyla, a boppy 8½ minutes of hyperactive interplay between bass clarinet and baritone sax, with brief passages of rhythmic respite. In the more raucous parts, Baker and Long allow their instruments to exude the most sonic edge to be heard on the disc.

Hyla’s piece is the oldest work on it, written in 1992. It was recorded by saxophonist Tim Berne and clarinetist Tim Smith on Nonesuch in 1996, a recording that has excessive reverb in the mix. Audio engineer William Allgood kept Baker’s and Long’s version sounding a lot cleaner, without losing the punch.

That’s consistently true for the disc, which the two musicians produced themselves. The straightforward production values place the focus on their considerable skills at bringing this handful of American works to the fore in engaging, lively renditions.

The duo will perform a CD release show at Eddie’s Attic in Decatur, but because of Baker’s heavy schedule of commitments over the next two months, it won’t take place until November 20.