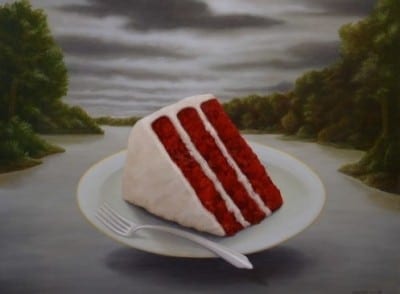 Long before the High Museum’s Salvador Dalí show gave rise to Atlanta’s 2010 Surrealist mania, Charles Keiger was painting his landscapes in which strange personal rituals are enacted. Usually laced with gentle wit, his work has long been a popular staple of Tew Galleries’ exhibition seasons.

The new show at Tew combines Keiger’s trademark giant flowers with some archetypal magic-tinged moments, such as the scene of a snake-bearing female “Conjurer” whose charms appear to generate the giant lily springing from a white cloud that hovers over dreamlike ocean waves. Freud would approve, but so would Jung or the Frazer of “Golden Bough” mythography. It works because it has been seen before, one way or another, for millennia.

What Keiger thought was his least significant painting, however, has tapped into a vein in the regional subconscious, at least of Southerners of a certain age and upbringing. (That’s what a regional subconscious is, the stuff some of us — not all of us — remember from childhood, or more accurately forget about until some event reminds us.)

Red velvet cake is a rarity in trendy circles these days, but the circumstances in which many people first encountered it occupy a place in the mind as magical as the mysterious moonlit river over which the slice of cake in “Velvet Moon” hovers weightlessly, a dominating dream vision that casts a shadow on the water.

It would be possible to give an extensive scholarly disquisition on why the formal qualities of this painting make it work on so many aesthetic and emotional levels, but it would be a shame to do so. It either works for (or on) you or it doesn’t. If it doesn’t, it doesn’t much matter why the subtle touches make this painting more than the agreeable little joke that Keiger thought he was making.

Tapping into culturally shaped emotions and childhood memories, though, is exactly what the original Surrealists were trying to do (and usually failing to do). Freud complained that they were being self-conscious about things that dreams or jokes did unconsciously, and that this was why their paintings were inconsequential.

By not bothering to be serious about his humor here, Keiger kicked his artwork up a notch — an excellent and illuminating paradox.