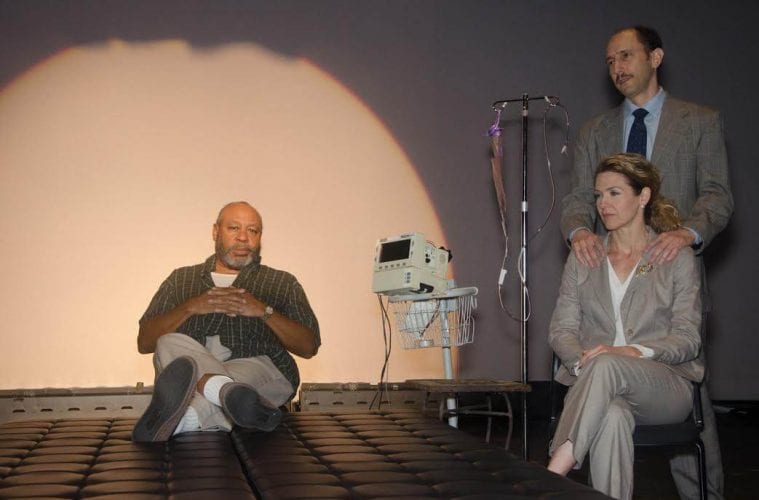 Review: “Between Riverside and Crazy” at True Colors is uneven but has its meaningful moments

“Don’t be the old black in the new white world.”

These words, uttered by Detective Audrey O’Connor, hang in the air in Stephen Aldy Guirgis’ 2015 Pulitzer Prize-winning play Between Riverside and Crazy. Nothing is as it once was in Walter “Pops’” life, which is evidenced by a dead Christmas tree that slumps in the window of his rent-controlled apartment on Riverside Drive. Ever since six gunshot wounds ended his career as a police officer and his wife died, Pops has taken to coping one bottle of cognac at a time.

Embroiled in a lawsuit with the NYPD, he occasionally entertains the company of his adult son Junior (who is still living at home); Lulu, Junior’s flighty, 21-year-old girlfriend; recovering drug addict Oswaldo, who has recently been released from prison; and an eccentric Brazilian church lady. One day, Walter’s former partner Audrey and her fiancé Dave, who is also on the force, show up for a visit that quickly turns into a strongarming to convince him to settle his case. Their visit sets forth a series of events that disrupt everyone’s normal in this comedy about how people cope with the old demons that show up when they’re trying to move on.

Under the direction of Eric J. Little, True Colors Theatre presents the dark comedy Between Riverside and Crazy through August 6 at Southwest Arts Center. Little’s direction lacks dynamism. There are a lot of scenes with people sitting or standing around the kitchen table, which renders the action a bit flat at times, even with the stirring dialogue. The cast is full of faces familiar to the Atlanta theatre scene and their talents are what brings this play to life.

The legendary Earl Billings plays Pops and convincingly captures the grit and anguish of a man who has lost everything. However, Billings is sometimes hard to understand while trying to maintain the character’s slurring, drunk voice, causing the audience to miss some crucial dialogue.

Andrew Benator, who was in the True Colors production of Race, is easy to love to hate as the squirmy, wise-cracking police officer. Diany Rodriguez also returns to the True Colors stage as the mysterious church lady after being in Exit Strategy in March. Her character offers the play’s biggest surprise, and she steals the show. Keith Arthur Bolden (Junior), Annamaria Dvorak (Lulu), Christian Gonzalez (Oswaldo) and Jerri Tubbs (Audrey) complete this ensemble cast of kooky characters.

The play’s script is certainly a quintessential example of Guirgis’ style that combines total realism with heightened reality. His plays compact sociopolitical messages into circumstances that seem too real, unreasonable and incomplete all at once. This is evident in Our Lady of 125th Street, The Mother****** with the Hat and the Netflix original series he cowrote with Baz Luhrmann, The Get Down.

“Stop and frisk” is a phrase coined for an NYPD policy that was in practice from 2002 to 2013. Under the policy, police officers were encouraged to search anyone they deemed suspicious in an effort to get illegal guns off of the streets. Over time, dissenters claimed that this policy disproportionately affected black and brown men by subjecting them to unwarranted searches and arrests.

The NYPD’s execution of the practice was ruled unconstitutional by a federal judge three years ago. Of course, hindsight is 20/20, and in a post-9/11 world, the policy had more champions than dissenters. However, in the years since the federal court ruling, studies have generated conflicting results about whether the policy is to be credited with lower crime rates.

The intense emotions and political arguments certainly give the audience something to chew on, but this production shines in the more intimate rooftop scenes. There’s an especially delightful and dysfunctional conversation between Junior and Lulu as they prepare to go on a vacation to Maryland. The two-person conversations on the roof are meant to serve as moments of clarity that take the characters outside of their circumstances, and Mary Parker’s lighting design enhances these scenes.

Moriah and Isabel Curley-Clay lend their signature hyper-realism to the set. However, the rest of the design elements fall flat. The costumes are ill-fitting, and the sound is distracting and sometimes heard to hear. There’s an off-stage dog that is easy to forget, and the music choices lack imagination.

Between Riverside and Crazy is packed with moments that are as funny as they are thought-provoking. Giurgis’ script paints a bleak picture of what it looks like for the world to leave you behind — after all, Audrey and Dave only revere Walter to the extent that his wisdom benefits their professional advancement. Though the pacing seems off in this production, the actors are mostly solid.