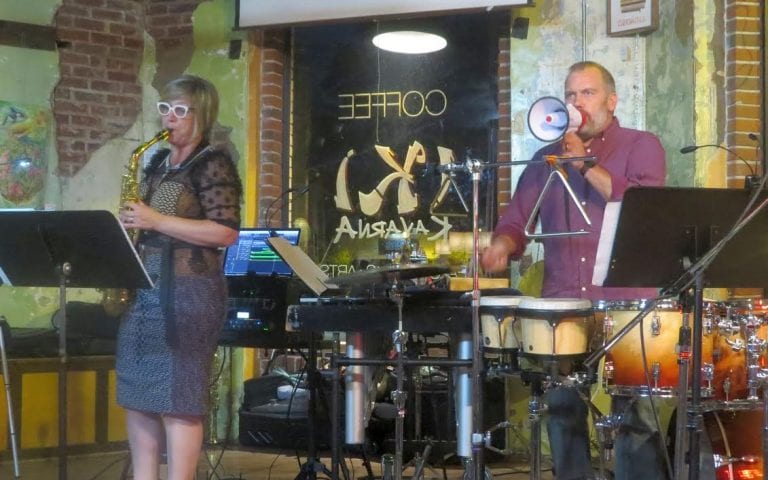 Jan Berry Baker on saxophone and Stuart Gerber on bullhorn and percussion at Saturday's concert. (Photo by Mark Gresham.)

On Saturday evening, the Bent Frequency Duo Project (saxophonist Jan Berry Baker and percussionist Stuart Gerber) performed a concert celebrating the release of their new CD, Diamorpha, at Kavarna in the Oakhurst community of south Decatur.

The duo is an ongoing project of contemporary music ensemble Bent Frequency, which has commissioned and performed new works for sax and percussion since 2014. Their new CD reflects that mission, the music drawn from only a portion of the duo’s extensive commissions over the years, curated by Baker and Gerber in a manner to give the album a singular resonance and unity, according to producer and engineer Robert Scott Thompson, who is also one of the composers represented on the disc.

The album was recorded over the span of two years. “Making a recording of this nature is not simple or straightforward,” Thompson told ArtsATL at Saturday’s concert, describing the recording process as having been one of getting consistently excellent “long takes” rather than the kind of micro-editing that is so often done in studio recordings. Because of that approach, one nine-minute work, Amy Williams’ “Child’s Play,” required four hours of studio time to record. Likewise as a result of that method, Thompson described the finished album as “the definitive performances of these pieces.” 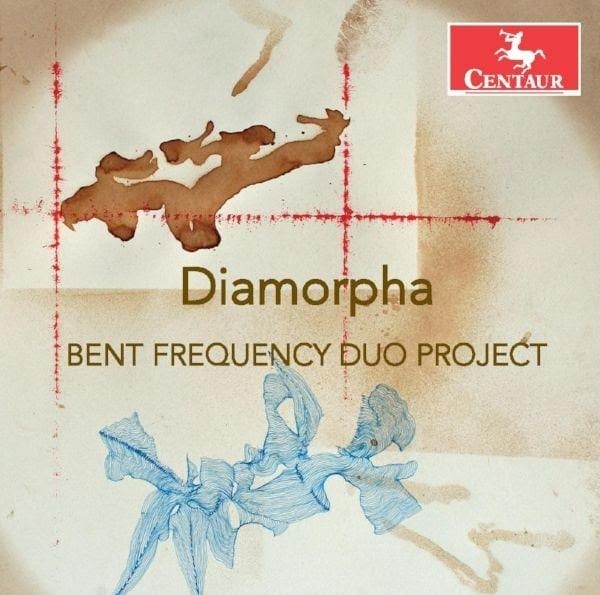 All of the tracks on the new CD were included in Saturday’s performance, but the show was kicked off by a piece not on the disc and quite different in character from it: “From the Air” by Laurie Anderson, from her 1982 CD Big Science. In the Bent Frequency version, Gerber commandeered a bullhorn with one hand while playing percussion with the other hand and a foot. Gerber’s use of a bullhorn rather than standard vocal amplification gave Anderson’s snidely dystopian text a kind of crackly-edged urgency not present in the original.

The six works from the CD followed, in different order than they appear on the disc, beginning with “You Don’t Need Eyes to See,” by Amelia S. Kaplan, inspired by the abilities of blind people to “echolocate” — the use of sound waves and echoes to determine where objects are in space, a skill also shared by bats. After that, Gerber moved over to a different setup for “I stood on the shore and looked up at the birds” by Jeff Herriott, which featured the gentle sounds of brass meditation bowls in its attractive texture.

Baker and Gerber closed the first set with Devin Maxwell’s “Seven Hills, OH” — a nine-minute set of seven shortish movements that are personal musical memoirs of the composer’s own compositional methods rather than descriptive vignettes of the city. The duo first performed it in 2013, and Baker noted from the stage that they have probably performed these miniatures more than any other work from the disc.

The second set opened with “Roulettes” by Chris Burns, inspired by the mathematical model known as “roulette” rather than the casino game. The duo talked about how they played it, a brief standalone work of only six minutes, on an early morning TV show in Milwaukee, with some enthusiasm from the host. The sound of crotales (a set of tuned antique cymbals made of bronze or brass discs) comes across as the work’s dominant feature.

“Child’s Play” by Amy Williams was written for soprano sax and a small group of toys. Williams herself is a pianist, but her father was a well-known percussionist, Gerber mentioned from the stage, so she knows percussion well. She gave the percussionist’s part not just things to be shaken or struck, but a slide whistle, plastic toy block-flutes and a police whistle were also among the portable array of toys that Gerber played. The combination of slide whistle with soprano sax made for a curiously engaging combination at the beginning.

Baker had her share of nonstandard sax techniques in the work’s three playful movements. Those included playing the single-reed mouthpiece by itself, as well as slapping the opening where the mouthpiece fits on the instrument, producing a percussive, popping sound; she could vary the pitch of the pop by manipulating keys with the other hand.

The evening concluded with the longest work on the CD, Robert Scott Thompson’s “METTĀ,” which utilized soprano sax, percussion and a considerable electro-acoustic fixed media component. Thompson’s choices of natural and modified sounds make for an ambient electro-acoustic track with which the live elements are well-merged and balanced in performance.

It was good to have heard both the CD and this live performance of the same music because no matter how definitive a recording may be, there is something elusive about the difference between it and live performance that makes the latter a different kind of engagement with the music, something that feels more alive and fleshed-out, even if less “perfect.” It reminds us that music, in the end, is a matter of human communication and interaction, ephemeral as that is, even though it is also great to have that idealized, somewhat permanent image preserved in fixed media for all time.