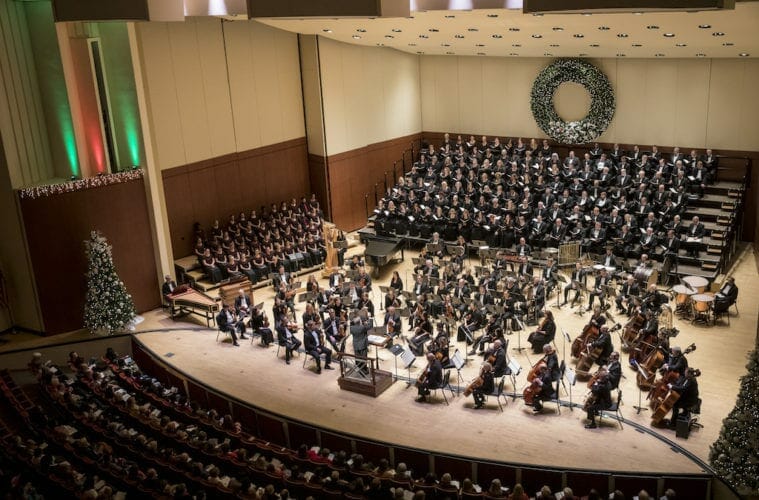 "Christmas With the ASO" included the fabled ASO Chorus and tenor Timothy Miller. (Photos by Raftermen)

Review: Beloved “Christmas With the ASO” in serious need of a modern-day overhaul

The Atlanta Symphony Orchestra’s annual holiday concert, “Christmas With the ASO,” is the latest installment in a beloved tradition, some more popular and others more classical, dating to Robert Shaw’s tenure as music director (1967–88) and further back to his New York radio broadcasts on CBS in the 1940s. The program is divided into four 20-minute segments called “Prophecy and Advent,” “The Stable,” “Around the Christmas Tree” and “Adoration.” This program is the ASO’s lighter counterweight to its more substantial performance of Part I and “Hallelujah” of Handel’s Messiah coming up on December 12–13.

This holiday celebration is striking, as it speaks to Atlanta’s diverse communities: sacred and secular, young and old, high and low culture and of different ethnic backgrounds. Similarly, an enduring legacy of Shaw’s outreach to many Atlanta communities has been the participation from area ensembles. Alongside the ASO and its chorus were the Morehouse College Glee Club and Gwinnett Young Singers, ensembles that collaborated earlier this season in a performance of Mahler’s Eighth Symphony.

Norman Mackenzie, Shaw’s apprentice from 1985 to 1999 and now the ASO’s director of choruses, was on the podium. Locally based tenor Timothy Miller, well known for operatic and oratorio roles, contributed four songs. An Augusta native and repeat performer with the ASO, he may be best known for singing “God Bless America” at Atlanta Braves home games.

The key takeaway from the “Christmas With the ASO” program is variety, but its danger is incoherence. The lighter, popular works suggest a sing-along, but the audience only got two chances to sing (although these were glorious), and there were no projections of lyrics. One would imagine this event catering to families, suggesting a more relaxed atmosphere, matinee timing, the wearing of Christmas hats or outfits and lower ticket prices, but few families attended, and the dress was typical for an ASO concert. One suspects that the beloved tradition of the four-part Shaw-inspired continuous program might be getting timeworn. On Saturday night, the hall was about two-thirds full, a disappointing turnout given the importance of the message of peace and stillness in our often unpeaceful world.

Each part had high and low moments. In Part I (“Prophecy and Advent”), “O Come, O Come Emmanuel” (arranged by Alice Parker) was orchestrated vibrantly with bells. It was remarkably free in terms of rhythm, giving the plainchant tune the flexibility it demands.

Miller’s first solo, “Comfort Ye, My People” from Handel’s Messiah, received a perfunctory accompaniment from the orchestra, with an excessively fast tempo, listless bowings in the strings, little sense of dynamic shape and a lack of the heavenly grace this aria demands.

Miller’s performance lacked power and enunciation and did not cut through the orchestra as an oratorio specialist must. Another Messiah hit, however, “And the Glory of the Lord,” was highly energetic and had great polyphonic depth, led precisely by the athletic and indefatigable Mackenzie.

In Part II (“The Stable”), the Gwinnett Young Singers shined for their pure tone and delightful, playful rhythms in Benjamin Britten’s “Wolcum Yole” from A Ceremony of Carols. This short carol has the beautifully spare accompaniment of a single harp, played admirably by Elisabeth Remy Johnson. Immediately following, Concertmaster David Coucheron’s performance from Vivaldi’s “Winter” concerto (part of The Four Seasons) was taut, well balanced against the bite of the harpsichord continuo and ever striving with crescendos while exploring the soft side of the dynamic range at appropriate moments.

Unfortunately, this section concluded with Miller delivering an underwhelming, uninteresting performance of Schubert’s “Ave Maria.” It was partially saved by Mackenzie when he slowed the tempo and gave Miller more chances to assert rubato. (Miller’s earlier performance of “O Holy Night” was the opposite: highly moving, heartfelt and more vocally powerful.)

Part III (“Around the Christmas Tree”) featured old favorites from Tchaikovsky’s The Nutcracker, such as “March” and “Dance of the Sugar Plum Fairy.” In the latter, ASO pianist Peter Marshall provided a sensitive account of the all-important celeste part, helping to portray the image of the Christmas tree to all. “The Boar’s Head,” an arrangement of the comedic carol by Shaw and Parker, showed another strength of Mackenzie’s as a conductor: a cappella anthems in which he (following Shaw) exquisitely timed the beginnings and ends of all consonants and vowels.

Part IV (“Adoration”) is the spiritual center of the program, the silent view of baby Jesus and the message of peace. This was bookended by Miller’s solo of the spiritual “Sweet Little Jesus Boy,” which was authentic, rhythmically free and unaccompanied, and then by an audience sing-along of “Adeste, Fideles” or “O Come, All Ye Faithful” (arranged by Parker), which was appropriately grand and reminiscent of high-liturgical church music.

The program, however, suggested that the audience sing Verse I in either Latin, which most audience members have not done, or flip to Verse IV in the English translation. If the ASO wants more audience involvement, these glitches must be addressed, and the conductor must face the audience throughout the sing-along and not just assume they are singing.

By evening’s end, the audience was transported to a sense of peace and meditation. But it is equally clear that the program needs an overhaul to make good on Shaw’s dream of community connections.