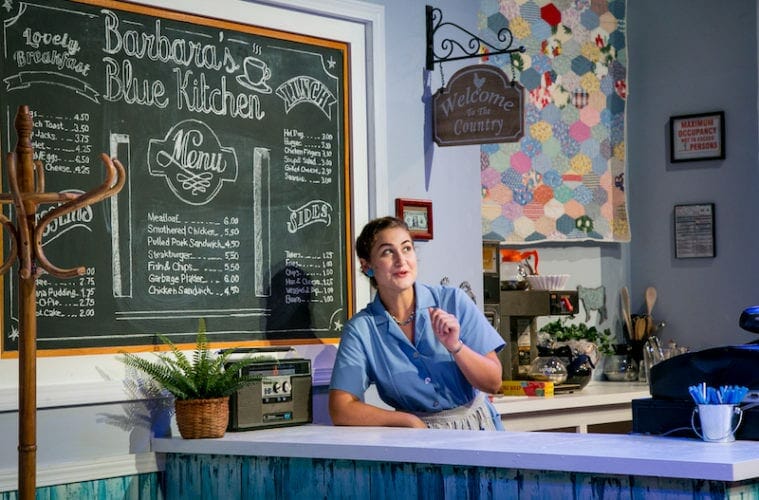 Chloe Kay is Barbara Jean, the owner of Barbara's Blue Kitchen in a small town outside Nashville. (Photos by Casey Gardner)

Review: “Barbara’s Blue Kitchen” at Aurora — sort of like “Greater Tuna,” with music

It was only six or so months ago that Aurora Theatre had the Gloria Estefan musical On Your Feet! on its mainstage, but it seems a lot longer than that. Covid-19 hit during the run, and theaters here and everywhere came to a halt with no real timeline for a return. Aurora is back now — with a careful hand and plenty of social distancing — with the virtual, small-scale musical Barbara’s Blue Kitchen (streaming for $30 per view through this Sunday, October 4 via the company’s website).

The 2000 musical comedy marks the first piece in the Lawrenceville company’s new Our Stage On-Screen series of virtual work. These shows will use small casts and provide artists with work during the pandemic. They’re also not bound by geo-blocking limitations and can be seen all over the world. 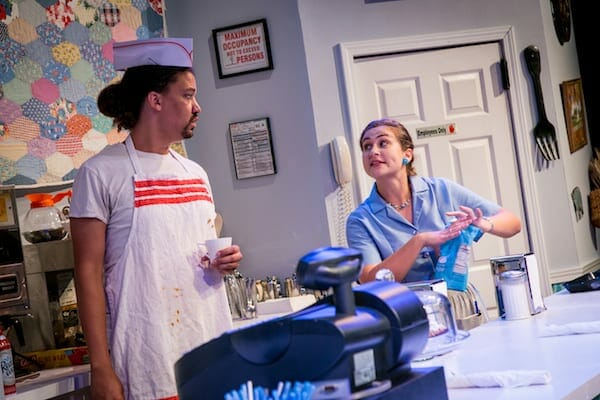 Barbara’s Blue Kitchen — with music, book and lyrics by Lori Fischer — takes place in Watertown, a small town near Nashville. The diner of the title is owned by Barbara Jean (singer-actor Chloe Kay). She plays several other characters as well, including Barbara Jean’s love interest, a hairdresser who sings country music and has a wandering eye. She’s also Barbara Jean’s pen pal, a new and rather clumsy waitress; Barbara Jean’s young sister; a senior citizen from the nursing home; and Miss Morris, a nurse (and gospel singer). Also onstage is DJ Dickie Brian Hull (Skyler Brown, who doubles as a cook and the show’s guitarist). The show moves back and forth between the diner and the DJ’s radio spots.

Barbara’s Blue Kitchen has a folksy Greater Tuna vibe. Nothing much happens at the diner save for some romantic yearning and gossip here and there. It’s a sweet, inoffensive show, just not very substantive. Associate artistic director Justin Anderson, who directs, has a way of livening up even dated material, though. This show moves along well enough, clocking in at about 75 minutes, but there’s not a lot he can do with some of the sillier moments.

The show features 12 songs (Aurora cofounder Ann-Carol Pence music directs, with Maurice Figgins on acoustic bass and Hayden Rowe on violin). It’s a mixed bag, but several songs stick. “I Want My Kidney Back” is among the livelier country-flecked tunes. 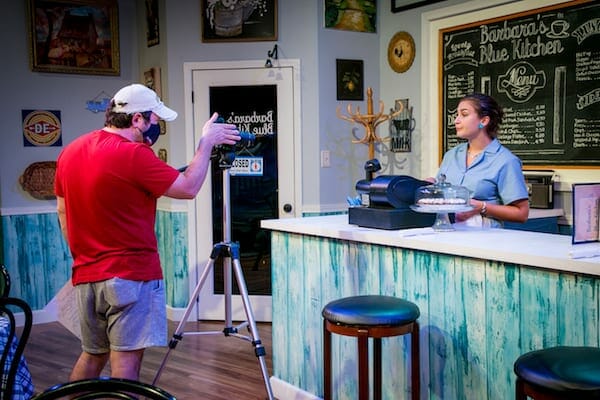 Barbara’s Blue Kitchen gives Kay plenty of room to sing and inhabit multiple characters, but the actor doesn’t quite seem as lived-in as Barbara Jean should be. Kay does have fun with some of the quirkier supporting roles.

Far more intriguing is how Anderson and company pulled the show off while social distancing. It’s filmed on a small stage (set by Jon Sandmaier) without an audience. The editing by Daniel Pope and Ashley Hogan makes the quick-fire, in-and-out characters believable.

Barbara’s Blue Kitchen comes from a theater with a love and appreciation for musicals, but it’s not likely to rock your world. Far be it for me, though, to knock a Covid-era company finding a way to adapt. Whether this is the new face of theater or just the here and now, it sure as heck is nice to see.