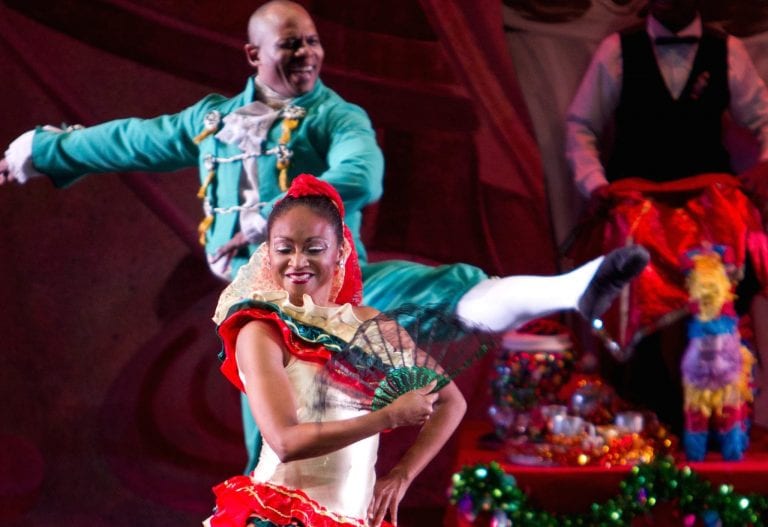 Review: Ballethnic’s “Urban Nutcracker” revels in its sense of place, community and tradition

The beauty of Ballethnic Dance Company’s Urban Nutcracker, now in its 20th year, is its celebration of community and its gimmick-free respect for this ballet’s classical heritage. One could say that costuming the Nutcracker to look like black nationalist Marcus Garvey is a gimmick, but in context it feels right; it’s simply another nod to the African American culture in which Urban Nutcracker takes place. The same is true with naming the Act II lead ballerina Brown Sugar instead of the Sugar Plum Fairy, and her partner the Chocolatier. It works.

The company gave four performances last week at the Ferst Center for the Arts. This is only the second time I have seen Urban Nutcracker, but the company confirms that it has changed very little since Waverly T. Lucas II, Ballethnic’s co-founder and co-artistic director with Nena Gilreath, choreographed it in 1993. In an age when many companies tart up the ballet annually with celebrity guest artists, special effects and brand new choreography and music to keep audiences coming back year after year, this adherence to tradition feels good.

The ballet begins with a prologue in front of the curtain. Big Mama (Sheila Spivey in gray wig, granny glasses and crocheted shawl) reads the story of the ballet beneath a street sign that tells us we’re on Sweet Auburn Avenue. The curtain then opens to reveal the Johnsons’ festive living room. Within no time the stage is filled with men, women and children at a holiday party.

This is where the community engagement is palpable. The party guests are danced by a slew of children, most of them no doubt from Ballethnic’s ballet academy, and adults of various ages, some of them from the HJC Bowden Senior Multipurpose facility. Billy Mims-Goodman, a nurse anesthetist the rest of the year, performed his signature role as the Drunken Husband. The ever-smiling Theresa Freeman-Howard, an assistant professor at Kennesaw State University, was a lively Mrs. Johnson, with Lucas as her gracious husband.

Atlanta actor Bradley Candie was an impressive and mysterious Professor Isaac (Drosselmeyer in the original ballet). Siblings Daysha Baker and Darius Idlett danced the roles of Sarah and Leroy Johnson, the lead children. The young Indira Cunningham played a few bars on her violin.

Everyone’s character was crystal clear, right down to the guy who insisted on taking a turkey leg home with him. Lucas and Gilreath do a marvelous job of getting everyone engaged with the action. They looked as if they were truly having fun, which isn’t always the case in this first act.

The snow scene began with dancers running across the stage with a long, flowing piece of white cloth. Snowflakes fell, and Gilreath and Roscoe Sales performed nobly as the Snow Queen and King, with a flurry of fancy lifts at the end. One line of Snowflakes demonstrated clean arabesque lines, arms beautifully synchronized.

In Act II, the Land of Sweets, Terrell Venn, Anthony Burns and Michael Ekwueme wowed the crowd with their leaps in the Black Russian dance (performed to drum music from L. Gerard Reid, the only non-Tchaikovsky music in the ballet). Lucas whisked Dominique Steele into effortless lifts in the Arabian variation. Indya Childs did her best with the rather strange choreography in the waltz of the flowers section. Saving the best for last, Brandy Carwile and Savery Morgan were a delicious and technically perfect couple in the Grand Pas de Deux.

There is definitely a message embedded in Urban Nutcracker. The story as read by Spivey described the Land of Sweets as a place of “no angry words” where everyone is brought together “despite their differences.”

There’s another message too. It’s clear that not every dancer who performed is on her or his way to a top professional career in ballet. Leg extensions weren’t always the highest. Turns weren’t always the cleanest. Feet weren’t always in the perfect arch, and some of the choreography felt leaden. But the dancers’ conviction, confidence and sense of style were outstanding, and every section looked well rehearsed. In the fight between the rats, the Nutcracker and the soldiers, it was wonderful to see the pint-sized army marching in neat, straight lines.

The men were strong and capable partners, which is not always the case in smaller companies. Even a slight wardrobe malfunction in the waltz of the flowers was quickly remedied. Credit has to go to Lucas, Gilreath and the company’s school for instilling such a good understanding of classical form and presentation in their dancers.