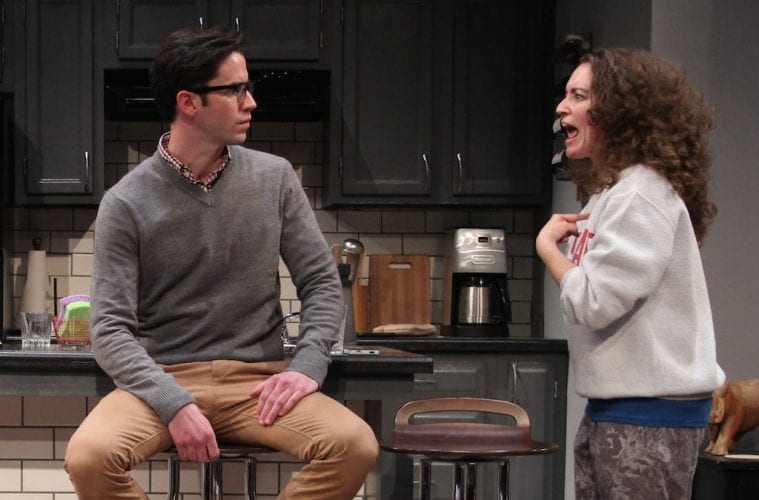 Review: “Bad Jews” has its funny and poignant moments, but is ultimately too constrained Papi’s dead, who’s got the chai?

That’s something of the set-up behind the new comedy Bad Jews at Actor’s Express through February 22 as three Gen-Y Jewish grandkids gather in a New York studio apartment immediately after their grandfather’s funeral.

Things are tense right from the start because Daphna (Galen Crawley) and Liam (Wyatt Fenner) don’t get along, mostly because they have such radically different attitudes toward their Jewish heritage: she’s getting ready to move to Israel and join the army after graduation, he poses on social media in a Santa hat at Christmastime with his shiksa girlfriend.

Things turn from tense to nasty as the two vie for possession of their grandfather’s chai, a traditional piece of gold jewelry that their beloved Papi managed to protect during the Holocaust by hiding it in his mouth.

The play was written by Joshua Harmon during a playwriting residency at Actor’s Express in 2010; it was subsequently a huge hit in New York and elsewhere (the program says it’s the third-most-produced play in the United States this season).

It’s a four-character play, so every player is crucial, but the action more or less focuses on Daphna, seemingly likeable for her devotion to her heritage and desperate need for authenticity, even as that need turns her into a master manipulator and deceiver. Crawley is funniest in the role in moments of contemplation, when the powerful character draws back from a scene to size up the situation. She wears an expression of barely repressed revulsion or it’s clear she enjoys a moment in which she can watch the wounded try to recover from one of her particularly humiliating jabs.

Her adversary, played by Wyatt Fenner, lacks the alpha guy toughness and scariness that would make him a real threat, at least physically. You won’t have to brush up on Freud, however, to understand the host of absurdities, particular interests and deeply psychological needs in order to understand the gist of their game.

In the end, Daphna’s obsession with Papi’s chai and Liam’s somewhat cavalier attitude toward his own Judaism could make a great case for theater if one were needed, with its on-stage masks revealing the most pious frauds. The three grandkids seem wired to transmute their grief and life’s meaning into something lasting, even if they are all, as the title suggests, bad Jews.

The sparring does get pretty mean-spirited — it’s one of the play’s selling points — but the arguments never quite reach the knock-down, drag-out, jaw-droppingly shocking level that seems promised and attempted at every turn.

Harmon’s machinations for the characters often feel deliberate, even effortful, which can compound the sense of there being something kind of empty about the proceedings.

One of the characters reveals he has honored his grandfather and accepted his inheritance in an entirely unexpected and troubling way, but this revelation comes as the very last thing in the play. It comes so late that it doesn’t really enter the conversation, and some of the characters, who have made their final exits by this point, don’t even get to react.

The kids’ attitudes to their heritage range from the desperately reverent to the narcissistically self-serving, and what’s most interesting and funniest here is that they themselves often have trouble untangling that mess or telling the difference.

In the end, the notion that this generation has a complicated and conflicting relationship to their Jewish heritage is interesting, but that alone, played out as a fight, doesn’t seem enough to hang a play on.