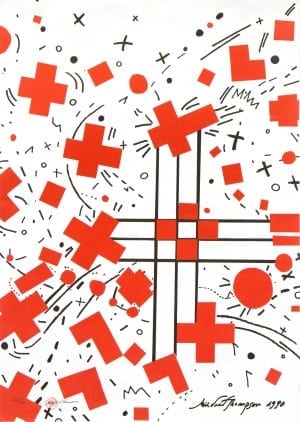 Part of a year-long Creation Stories series of exhibitions and events, Creating Matter: The Prints of Mildred Thompson, at the Michael C. Carlos Museum through May 17, is an effective introduction to this versatile artist. Even though this modest selection of works on paper represents only a small fraction of her oeuvre, they illustrate — among many other things — her interest in science and in retooling symbols for the dawning 21st century, laying claim to universality without denying her African American identity.

Thompson, who died in 2003, established this model for her artistic identity early. After studying at Howard University with the legendary artist and professor James Porter, she departed the United States for Germany, where after further studies in Hamburg she became a much-beloved educator in the midsize German city of Düren. Repelled by the racism of the American art world and American society during two widely separated interludes in the United States, she spent most of her career in Germany and France before moving to Atlanta in 1986. Over the ensuing decade and a half, she became an associate editor of Art Papers, a (once again) greatly adored mentor to students at Spelman, Agnes Scott and the Atlanta College of Art, and, in her final years, a blues musician.

Thompson’s ahead-of-the-curve globalism and cosmic perspective did not always mesh well with art world recognition. In spite of support by such farsighted collectors as Wes and Missy Cochran (whose acquisitions form the core of this exhibition), early purchases by New York’s Museum of Modern Art and inclusion of one of her works in the 1992 Dakar Biennale, her work has never been more than modestly known beyond a limited but passionate coterie of devotees. (Disclosure: Having been Thompson’s coworker on projects including a 1989 on-scene survey of art in Berlin, I know and have worked with many members of that coterie.)

Looking back on Thompson’s career through these etchings (plus screen prints and one vitreograph), it is evident that she was frequently in the mainstream of her era as well as often defiantly outside it. The looping lines of the 1991 Death & Orgasm series make use of visual strategies of abstraction firmly established in printmaking in the latter half of the 20th century. The same is true of later works that combine these with sinuously off-center circular shapes, which refer simultaneously to ancient symbols and to photographs from physics and biology research laboratories. (Her most popular academic course, “Making the Invisible Visible,” introduced students to similarly thought-provoking combinations of archaic and contemporary imagery.)

The pieces that give clues that something dramatically different might be going on, however, are the color-saturated 1993 vitreograph Wave Function III and an adjacent screen print, Adversary Impulses 36, where a veritable explosion of ovals and parallel parabolas creates visual metaphors for the processes of invisible or cosmic natural forces. This imagery stems from a large body of Thompson’s oil paintings, most of which have never been exhibited in Atlanta or have not exhibited in many years.

One figurative piece from 1959, an example from the Carlos’ permanent collection, reflects the style from which she later shifted to her more characteristic abstraction. A colorful 1990 screen print, reflecting the look of Malevich at a time when the Russian Constructivists were being freshly appropriated, is potentially misleading; it was created as an homage and fund-raising tool for the Red Cross in Düren.

Even this incidental commemoration gives a glimpse into Thompson’s ongoing connection to Europe, just as the untitled prints from her 1999 residency at South Africa’s Caversham Press reflect her idiosyncratic but continuing relationship with Africa, although they are ostensibly related to string theory in physics.

As is appropriate for Thompson’s fascination with the many dimensions of visibility and invisibility, there is far more revealed by this exhibition than meets the uninstructed eye. It is to be hoped that the Carlos exhibition will stir interest in giving Thompson the retrospective her body of work deserves.