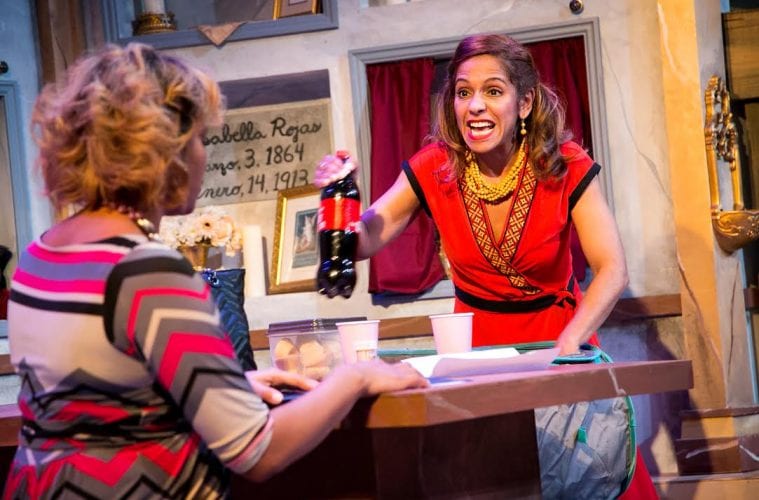 Violeta (Irma Cristancho) hasn’t seen her daughter Cotillon (Joselin Reyes) and granddaughter Prudencia (Limara Meneses Jiménez) in years, and she is determined to make amends with her family before she kicks the bucket. So, she decides to stage her own suicide in the family mausoleum on Mother’s Day to force them to celebrate with her. El Gran Dia de la Madre by Chascas Valenzuela and Julian Quintanilla is onstage at Aurora Theatre through April 29 under the direction of Daniel Jaquez.

The play is performed in Spanish with English supertitles as part of the Harvel Lab Series partnership with Georgia Gwinnett College.

On the surface, this telenovela-style farce appears to be another dysfunctional mother-daughter comedy. As secrets are revealed about the family’s maid and finances, however, it becomes clear that there is more to the story. Prudencia is a surrogate who has been pregnant for the last seven years and sees her grandmother’s potential suicide as a way to make fast cash. Cotillon wants her daughter to give her a grandchild in order to calm her blood pressure. And Violeta wants her daughter and granddaughter to want to celebrate her for Mother’s Day. The truth is that they are all pretending to want something different, but they really want each other.

Valenzuela and Quintanilla have crafted a hilarious script that is full of over-the-top reactions to dark situations — after all, the play takes place in a mausoleum. But the script is funnier than this production. The performances are uneven because the actors are either too sincere in their belief of the characters’ stakes or not sincere enough.

This is a strong ensemble, but they could stand to up the ante on their performances. Cristancho, however, has some scene-stealing moments. When she walked onstage, ready to overdose on Valium in a blue sequinned flappers dress and sparkly high heels fit for Dancing with the Stars, the audience erupted into laughter. Her guilt-tripping and manipulation of Cotillon and Prudencia is relentless and very funny.

Jimenez and Reyes do a nice job of playing off of her antics, especially in a scene where Cotillon crawls into the casket and declares that she will be the one to die on Mother’s Day, but their performances also beg for more humor and oomph.

Set designer Sebastien Oliveros-Tavares, costume designer Courtney Flores and props designer A. Julian Verner pull the audience into this family drama by creating a mausoleum that fills the space. The set is very much inspired by puppet theater, with all sorts of trap doors and places for people to fall in and out of, and these surprises make the casket scenes utterly ridiculous. Flores does a nice job of enhancing the crazy, right down to the candles and crucifix of a Chinese Jesus.

El Gran Dia de la Madre is a raucous, light-hearted comedy that proves all problems can be solved with family, forgiveness and food. As the playwrights say, “Like all abandoned daughters, they always come back.” In this girls-night-out farce, the secrets that drive a wedge between Violeta, Cotillon and Prudencia are also the ties that bind them together. This Aurora Theatre production definitely serves up the giggles and also has the potential to serve up a few more.