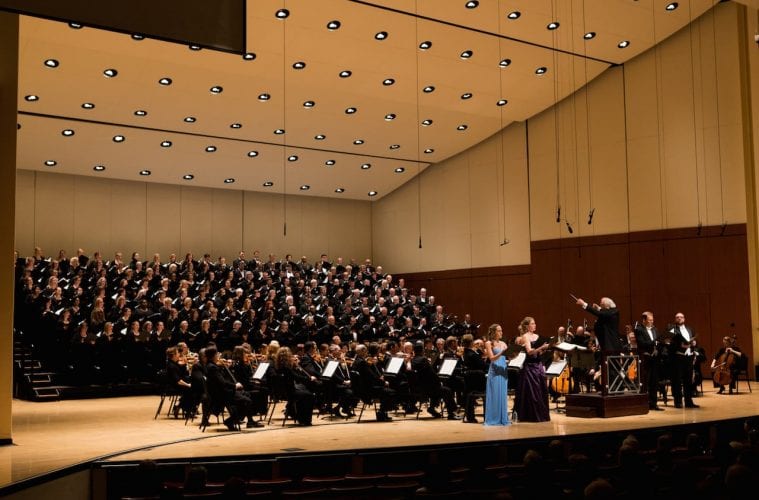 In Thursday’s performance, the chorus was loose and off the beat several times. (Photos by Jenni Girtman)

The chorus was prepared by ASO director of choruses Norman Mackenzie. Projected surtitles, English translations of the Latin text, were by ASO program annotator Ken Meltzer. The performance was repeated Saturday evening at Symphony Hall. These concerts are part of the ASO’s Robert Shaw Centenary celebrations.

Completed in 1823, one year before his iconic Symphony No. 9, Beethoven’s “Missa solemnis” has been a major part of the ASO choral-symphonic legacy. Robert Shaw concluded his first season as ASO music director with a performance of “Missa solemnis,” with the chorus comprised of his new Atlanta Symphony Chamber Chorus, the Choral Guild of Atlanta, and an ad hoc Atlanta Intercollegiate Chorus.

After the larger Atlanta Symphony Orchestra Chorus was formed in 1970, Shaw led them and the ASO in a good handful of “Missa solemnis” performances over the years, in 1972, 1976, 1981, 1982 and 1987 in Symphony Hall and on tour. Shaw and the ASO and Chorus recorded “Missa solemnis” for Telarc Records.

The ASO Chorus has plenty of experience with Runnicles on the podium, including tours to Germany to perform major choral-orchestral works under his baton with the Berlin Philharmonic: Britten’s “War Requiem” in 2003, Berlioz’s “Requiem” in 2008 and Brahms’ “Ein deutsches Requiem” in 2009. Then in 2011, Runnicles took up the “Missa solemnis” with the ASO and Chorus to critically favorable reviews.

So with this ASO re-visitation to Beethoven’s “Missa solemnis” with Runnicles at the helm this week, there has been much anticipation of great things in the air. Personally, I was expecting to be blown away by Thursday’s performance.

It was an off night for the ASO Chorus, something thoroughly atypical of them. That assessment acknowledges, of course, the tremendous difficulty of the “Missa solemnis” in terms of choral technique, musical and vocal demands, and sheer physical stamina. It is a damnably challenging 80-minute work. Not because Beethoven didn’t understand voices, but because, as Stravinsky suggested, he pushed their limits to achieve the music he had in mind. It is, frankly, beyond the capacity and resources of many other volunteer choruses. Nevertheless, the Atlanta Symphony Orchestra Chorus is its own yardstick of excellence. By that normative comparison, Thursday’s “Missa solemnis” was a rather raggedy performance, certainly not on the same level as this past November’s Verdi’s “Requiem.”

The primary problems stemmed from issues of loose musical ensemble — just not being tightly on the money, which is essential. The orchestra itself was the most cohesive, but the chorus had ensemble problems both internally and staying with the orchestra. This was not consistent throughout but was much too present. The inconsistency was especially the case at several significant transitional points, where the chorus and orchestra did not land squarely together in a new meter or tempo.

The vocal quartet was mostly successful. Strebel has a bright, clear soprano, but once she reached the highest range of her demanding part, she had to push into a harsh vocal color to arch to the end of the phrase. Lauricella’s mezzo was of a mellower, creamy tone, blending well with Strebel, but not quite seeming to balance with Strebel at times for that very reason. Mulligan’s reedy baritone and Mathey’s clarion tenor rounded out the quartet. But they too had a few occasions of singing on the back end of the beat and not always being together as a quartet.

Interestingly, three of these singers — Strebel, Lauricella and Mulligan — will be singing “Missa solemnis” with Runnicles again on March 10 in Glasgow, Scotland, with the BBC Scottish Symphony Orchestra and the Edinburgh Festival Chorus.

Concertmaster David Coucheron, who was in his first season with the ASO at the time of the 2011 “Missa solemnis” performance, stood up as he did back then for his extended violin solo in the “Sanctus.” It began in the instrument’s high range, introducing some of the work’s most transcendent music. Coucheron’s performance was spot on, his signature lyrical playing a beautiful highlight of the performance.