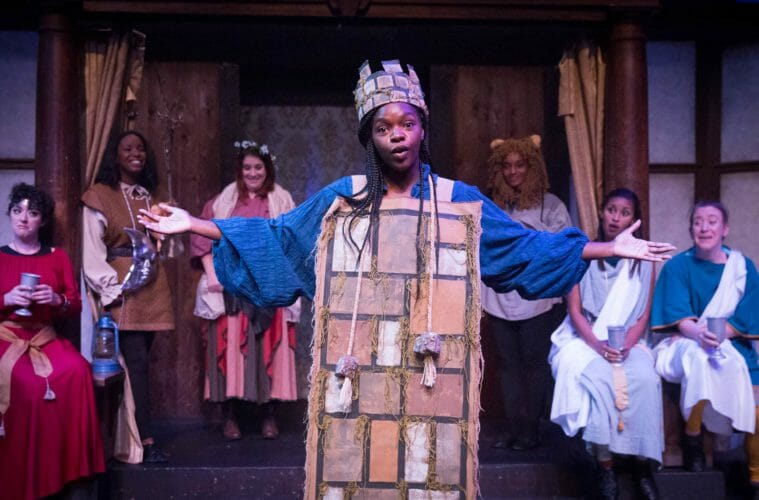 Destiny Freeman portrays The Wall during the play-within-a-play of "A Midsummer Night's Dream" at the Shakespeare Tavern. (Photos by Jeff Watkins)

It is no small feat for a Wall to steal a scene, yet the Atlanta Shakespeare Company’s fun, novel approach to A Midsummer Night’s Dream at Shakespeare Tavern Playhouse allows for moments like that.

In its first staged production since the pandemic shutdown of March 2020 and the racial reckoning of last summer, the Tavern delivers a midsummer Midsummer that features an all-female, racially diverse cast where everyone plays a double role. And the production, directed by Laura Cole, leans heavily into the silliness of the comedy, even underlining moments in the text made funnier by this casting. 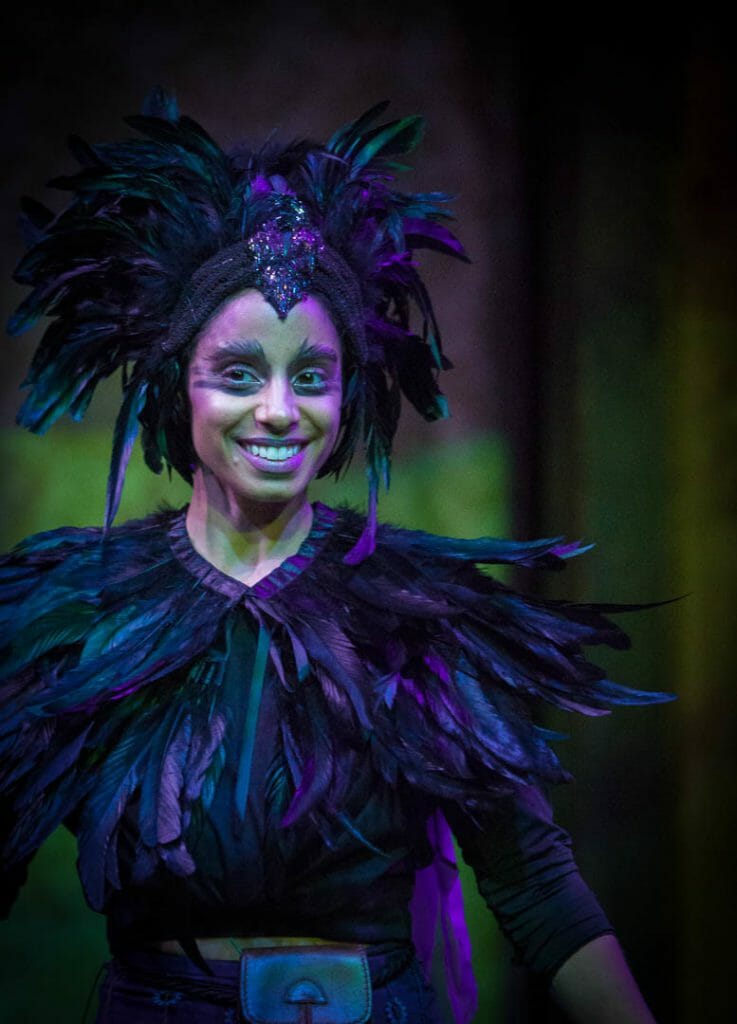 For instance, the line “O night with hue so black!” gets a big laugh thanks to an added gesture that should not be given away here. Whether dancing, romancing, singing or fighting, this ensemble seems to be having a blast.

Some may grumble or be confused — particularly with no paper programs, due to the pandemic (there’s a bar code instead) — by the play’s first scene, trying to determine who are the grooms and fathers. But that confusion quickly dissipates when the play’s focus turns from exposition surrounding noble crowds to the fun of star-crossed lovers and fairy magic.

It helps to remember that, when the play was originally staged at the Globe in the late 16th century, women were not allowed to perform, and the parts were all played by men. Thus, this production technically requires no new leap of thought. It just requires the audience to be as flexible in our thinking as our historical counterparts were.

A Midsummer Night’s Dream, continuing through September 5, is the Bard’s most popular comedy. It tells the story of Hermia, who is in love with Lysander, but her father commands that she marry another Athenian, Demetrius, or face death. Her best friend Helena loves Demetrius, but Demetrius spurns that affection. In the night, Hermia and Lysander rush into the forest to elope, and Helena and Demetrius chase after them.

In that enchanted forest, the Fairy King Oberon is in an argument with his wife Titania, and he conspires with a sprite named Puck to humiliate her using a love potion. While she sleeps, Puck anoints her eyes so that she will fall in love with the first thing she sees.

And Puck assures that the first thing Titania sees is, literally and figuratively, a pompous ass named Bottom — an actor who is part of a traveling theater troupe of self-serious buffoons. Puck’s magic gives Bottom the head of a donkey for the night of fairy romance.

Meanwhile, Puck’s attempts to help the four young lovers goes awry when he gives the love spell to the wrong people, leading to much drama and farce.

This Atlanta Shakespeare production is very funny in places. The second half of the show, where much of the magical fallout takes place, is gangbusters. Confrontations between the angry lovers are played to the crowd, like an episode of The Jerry Springer Show filled with catfights and hurled insults. 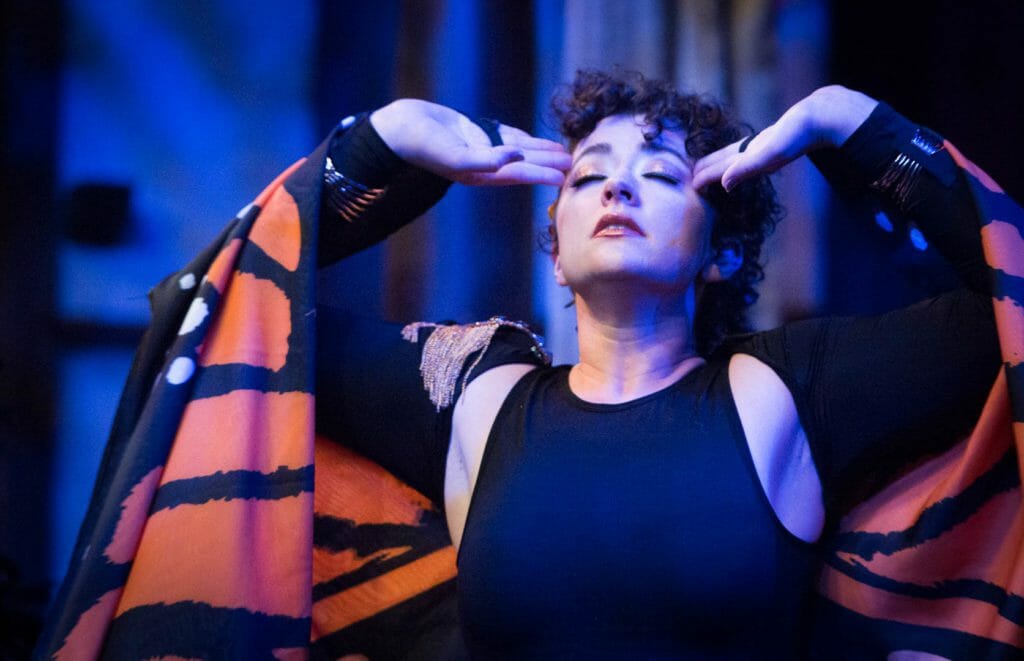 And the troupe’s play-within-a-play about Pyramus and Thisbe, which usually is mildly amusing yet diverting after all the romantic entanglement is done, is hilarious here. On Midsummer’s opening night, it became difficult to tell whether the actors onstage or the characters they were playing were breaking into fits of laughter about the play-within-a-play. Either way, the fun was contagious. Lord, what fools these mortals be!

Thanks to the double-casting, everyone gets moments like that to showcase their range. There are no small parts in this Atlanta Shakespeare production. The director has given everyone a moment in the spotlight.

Rachel Frawley plays the Amazon Queen Hippolyta as a fierce warrior, then switches to play Fairy King Oberon as a trickster with a romantic side, while Gabi Anderson plays Duke Theseus and then Fairy Queen Titania.

Jasmine Renee Ellis, playing a Bottom full of arrogance and bravado, delivers a terrific performance at the center of the theater troupe. Yet every member of that troupe gets laughs to match Bottom’s. 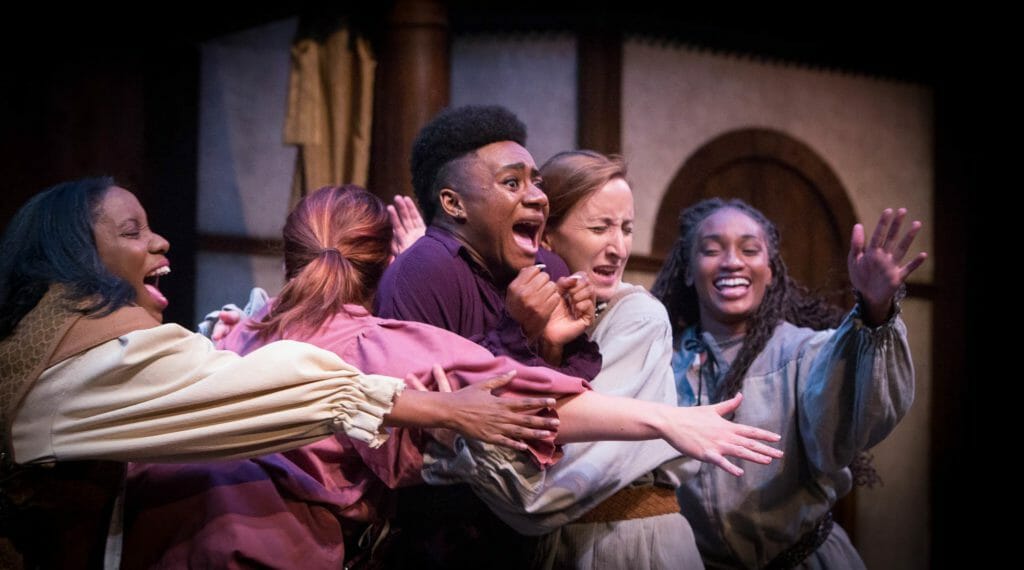 Bottom, played by Jasmine Renee Ellis (center), is reunited with the acting troupe.

Among the young lovers, Cameryn Richardson’s Helena is heartbreaking and complicated. The character is spurned, deeply insecure and guarded. As Helena’s romantic fortunes change, Richardson plays her asides with particular vulnerability and anger. It’s a strongly relatable performance.

Kirsten Chervenak, Sarah Beth Hester and Mary Ruth Ralston, playing Hermia, Lysander and Demetrius, have fun with the wit of their fights and the physicality of their battles.

As the sprite Puck, Shante DeLoach brings spirit and spunk to the role, which guides us through the madness of the night and then bids us farewell in one of Shakespeare’s best monologues.

Because of city mandate and the ongoing pandemic, the Tavern is operating at a reduced seating capacity, and masks are required among the audience when they are not eating and drinking.

Though the return to normal may be compromised, this show is mostly fierce.