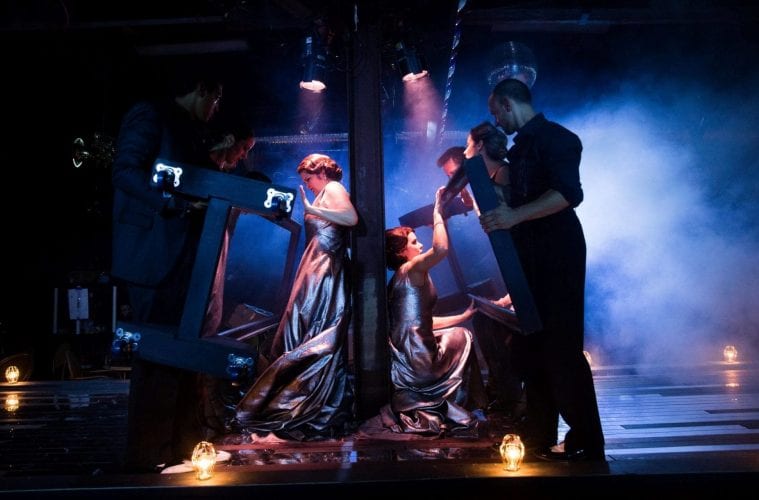 On Thursday evening, the Atlanta Opera opened its season with the first of eight performances of Kurt Weill’s The Seven Deadly Sins in Le Maison Rouge at Paris on Ponce – where the company presented its highly successful Maria de Buenos Aires last season. With production direction by Brian Clowdus, it is the first of the company’s two Discovery Series productions this season. Four performances remain October 3 through 6.

The Seven Deadly Sins is not actually an opera per se but a ballet chanté (“sung ballet”) in a continuous sequence of seven scenes hung in between a brief prologue and succinct epilogue. Written in 1933, it was Weill’s final major collaboration with librettist-lyricist Bertolt Brecht, who wrote the German libretto. Although Weill had socialist sympathies, Brecht had been increasingly pushing the envelope of his own Marxist leanings. Over time, that created a strain between the two. To quote Weill’s wife, Lotte Lenya: “Kurt said he couldn’t set the Communist Party Manifesto to music.”

In this production, Atlanta Opera chose to perform The Seven Deadly Sins in a time-honored English translation by W. H. Auden and Chester Kallman, with the same also provided to the audience on screens as supertitles. That was a good, non-snobby choice, as it is a work that needs to be sung in the vernacular, especially given that the story takes place entirely within the United States, beginning and ending in rural Louisiana, although the course of the action traverses a diverse span of cities: Memphis, Los Angeles, Philadelphia, Boston, Baltimore and San Francisco.

The story centers on Anna, portrayed in two contrasting sides of her personality, the Anna I in this performance by mezzo-soprano Jennifer Larmore (played on four alternate nights by mezzo-soprano Gina Perregrino) and Anna II by dancer/choreographer Meg Gillentine. The pragmatic, admonishing Anna I is sung, while the artistic, passionate Anna II is danced. For all other intents, they appear to be essentially mirror images of each other as the scenes develop. 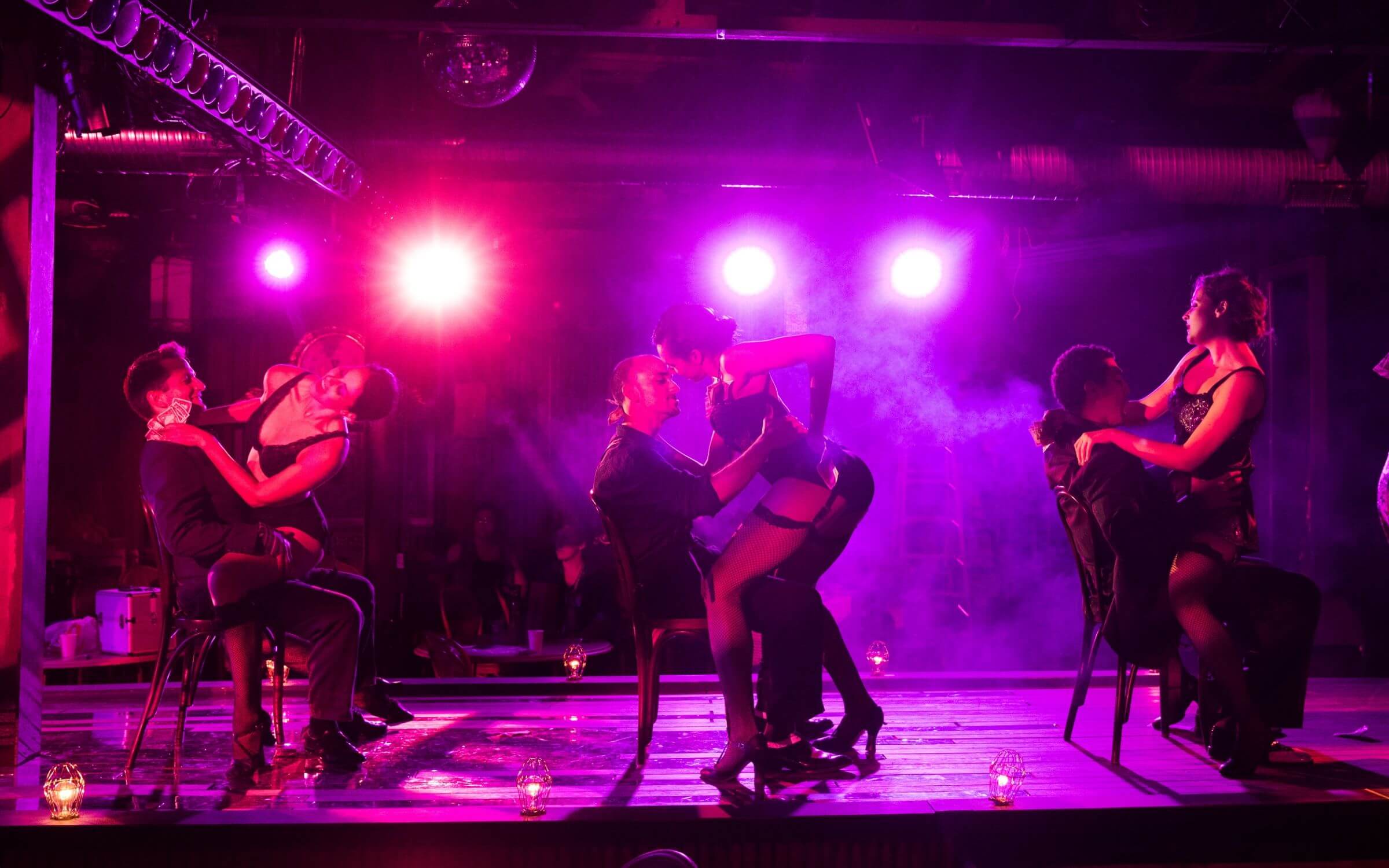 As counterbalance to the two Annas is a male quartet (Nathan Munson, Justin Stolz, Christopher Dunham and Calvin Griffin) that portrays Anna’s family in the manner of a Greek chorus that motivates and comments upon the story, essentially pushing Anna into a moralistic corner: they believe it up to Anna to go out and acquire enough money for the family to build “a little house” on the banks of the Mississippi River. They prompt her to do so, assessing that while she is an otherwise dutiful daughter, she has in some ways been idle (thus the accusation of “sloth”). “Lazybones are for the Devil’s stockpot,” they observe.

The dutiful element in her complies, and Anna I & II travels city to city, encountering the rest of the seven deadly sins, one by one: in Memphis, “pride” as she accepts “entertainment people ” over art; in Los Angeles, “wrath” as she is chided to temper her anger against injustice; Philadelphia, “gluttony”; Boston, “lust”; Baltimore, “covetousness”; and San Francisco, “envy.” In the epilogue, after she has made enough money, Anna returns to Louisiana to settle there with the family, perhaps at the great cost of self-repression, and perhaps destruction of her intrinsic morality in the course of the journey.

Director Clowdus and choreographer Gillentine, who has incorporated three other dancers besides herself (Priscilla Curtis, Brian Jordan and Imani Joseph) into the production, made very effective use of the small, limited stage space with blocking and movement, smoke and rolling mirrors and shifting lighting to define the abstracted scenes – though sometimes too much of rapidly flashing theater lights was more of an annoyance at times than a help to the audience. But overall, it was a tight, effective production that moves along the story without sagging.

Since The Seven Deadly Sins is a one-act length piece, as the focal point it was presented as the second half of the evening. It stands to reason, then, that one of the options for filling out the program would be to present a collection of songs by Weill as the first half.

A clever premise was devised for this “cabaret” of songs, presenting them as if backstage, in the general dressing room, beginning as the cast is given their half-hour call by the stage manager. These cast members (the dancers, the four men who comprise Anna’s family, plus soprano Bryn Holdsworth, who sings only in this cabaret set) play out that scenario with songs by Weill, written with various lyricists.

Only a few songs came from Weill’s collaboration with Brecht (“Mack the Knife” and “Pirate Jenny” from The Threepenny Opera (1928), in English translations by Marc Blitzstein; “Alabama Song” originally in the little songspiel Mahagonny (1927) and subsequently incorporated into their 1930 opera Rise and Fall of the City of Mahagonny, the English translation by Elisabeth Hauptmann.

Two other songs from Weill’s remaining time in Europe were both from 1934: “Je ne t’aime pas” (“I do not love you”), on a text by Maurice Magre, written for the soprano Lys Gauty, a French cabaret singer and actress, and the song “Youkali,” written for the play Marie Galante by Jacques Deval.

The rest were from Weill’s American period, after he and Lenya moved to New York: with lyricist Ogden Nash “I’m a Stranger Here Myself,” “Speak Low” and the barbershop scene quartet “The Trouble with Women” from the 1943 musical comedy One Touch of Venus; with lyricist Langston Hughes, “Lonely House” and “What Good Would the Moon Be?” from the opera Street Scene (1946) in which Weill tried to successfully merge elements of European opera with those of American musical theater; and from two musicals with lyricist Maxwell Anderson, “September Song” from Knickerbocker Holiday (1938) and “Lost in the Stars” and “Stay Well” from Lost in the Stars (1948).

The cabaret, with its backstage premise, was a somewhat low-key appetizer compared to the main course of the tightly wound The Seven Deadly Sins that followed, but it offered a broad look at a span of Weill’s more successful songs, particularly his American period when he began adopting elements of American musical theater into the established European musical style, which served him well in his collaborations with Brecht, as epitomized by The Threepenny Opera. The payback would ultimately prove to be the influence Weill had in return on the development of American musical theater.