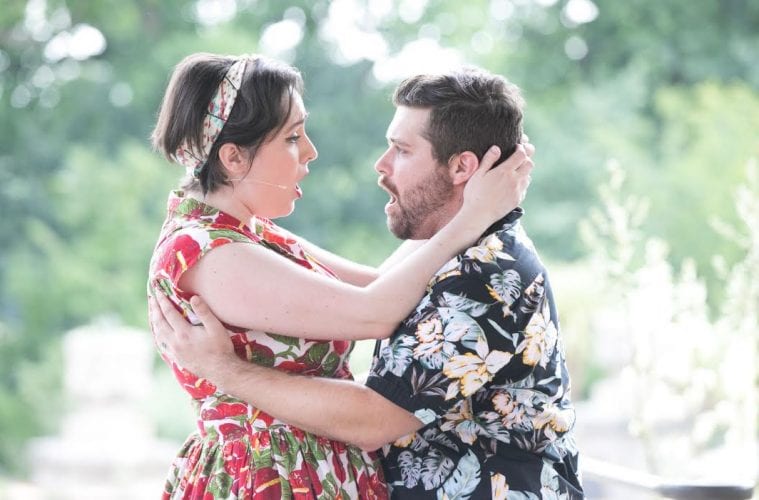 Review: The Atlanta Opera closes its season with a lovely garden party for “The Secret Gardener”

On Friday’s sunny afternoon, at the Atlanta Botanical Garden, the Atlanta Opera, in collaboration with New York City’s On Site Opera, presented an outdoor performance of W.A. Mozart’s youthful opera, La finta giardiniera (“The Fake Gardener“) in a reworked and shortened English-language libretto by Kelley Rourke, and billed as The Secret Gardener. Two additional performances were presented Saturday, part of the Atlanta Opera’s innovative “Discoveries Series” and closed the company’s current season. On Site Opera had also presented The Secret Gardener with the same cast and creative team the previous week at Westside Community Garden in New York City.

It was an entertaining performance by a credible ensemble cast, seen and heard close-up, each of whom had good opportunity to strut their own stuff, both character and voice. There were eye-rolling garden (and garden tool) puns that permeated parts of Rourke’s libretto, especially in the beginning, a clue to the lighthearted tone well-suited to the very warm spring afternoon.

The heroine is Lady Violet, a marchesa who disguises herself as a garden girl named Sandrina (soprano Ashley Kerr), working at the mansion of the town’s Podestà (mayor), Don Anchise (tenor Jonathan Blalock), hiding herself from her true but ill-tempered lover, Count Belfiore (tenor Spencer Viator). She is accompanied in her work by her putative cousin Bernardo, who is in reality her servant Roberto (baritone Jorell Williams), likewise in disguise and in on the ruse.

However, there is an arranged marriage in store between Belifore and the Podestà’s niece, the strong-willed Arminda (soprano Maeve Höglund) who has spurned her lover Ramiro (mezzo-soprano Kristin Gornstein in the “trouser” role originally intended for a castrato). At the same time, Nardo is in love with Serpetta (soprano Alisa Jordheim), the Podestà’s servant who is in love with the Podestà instead, while the Podestà has developed eyes for Sandrina.

In short: total romantic chaos and confusion. Rourke’s version is a total romp — pure springtime entertainment. It tosses out some of the untenable, darker aspects of the original Italian libretto, attributed to Ranieri de’ Calzabigi (the same poet who provided the libretto for Gluck’s Orfeo). Rourke dispensed with a major unattractive premise in her version: that prior to Act I the hot-headed Belfiore stabs Violet during an argument, panics and leaves her for dead — which makes the story’s reconciliation of the two lovers a bit less believable in our era, though his assumption that she was dead would more easily explain his acceptance of an arranged marriage to Arminda as well as his initial attraction to her. That is, until he spots Violet disguised as Sandrina the gardener.

Rourke’s English version is also more compact, eliminating tedious recitatives and replacing them with succinct dialogue. It’s not without precedent. Mozart wrote and premiered the original version at age 18, but five years later he created a German singspiel version that did the same thing. In the case of Rourke’s update, however, all three acts are compressed enough to be strung together as an intermission-less performance of about 90 minutes or so, and was presented here that way.

The performances took place outdoors in and near the new Robinson Gazebo, located immediately behind the Fuqua Conservatory. The Robinson Gazebo is a rectangular pavilion poised at the highest point within the new Skyline Garden — a 1.5-acre, $6 million remake of the ABC’s hillside southeastern corner, which opened earlier this month. Created by Atlanta Botanical Garden, Spurlock Landscape Architects and public garden designers 3.fromme Design, the Skyline Garden is centered around a large, circular aquatic plant pool at the bottom of the wide stairways that cascade down from the Robinson Gazebo. It also incorporates a bog garden, the Anne Cox Chambers Flower Walk, and is the new location of the Botanical Garden’s cacti and succulents collection.

The audience, seated in curved rows of folding wood chairs, facing outward toward the open garden below. That posed for stage director Eric Einhorn the interesting challenge of an upstage that is considerably downhill. Within the pavilion, the seven singers had the equivalent of a downstage apron to work on, as well as the aisles between and behind the audience, making the experience somewhat immersive.

The Skyline Garden itself, though downhill, made for a rather expansive backdrop, with the panoply of trees and several Midtown skyscrapers reaching up into the bright blue sky festooned with puffy cumulus clouds on parade.

The stairways from the garden served as grand entryways to the main stage area, but even the piazza around the aquatic plant pool, far below, served as upstage on occasion. If positioned well, or just lucky enough, one could see, say, Sandrina and Belifore arguing in pantomime down by the pool, like characters in the background of a Robert Altman film, while others were arguing in song in the foreground — a successful example of multiple points of focus, as the action at different parts of the performance space did not conflict.

The small orchestra, led by conductor Geoffrey McDonald, was positioned under its own canopy outside the stage left side of the pavilion. The orchestra’s part, originally written for strings plus pairs of oboes and horns, in this production was rescored for an octet of winds plus a contrabass, more suited to open-air performances and not uncharacteristic of a kind of small wind ensemble that would play music outdoors in Mozart’s own day. It felt appropriate to both the music and the occasion.

The necessary use of amplification for the outdoor venue, via use of wireless mics worn by the singers, may have flattened the sense of sonic “depth of field,” as often happens, but it also well-controlled the consistency of the vocal sound for the audience, wherever on stage the singers happened to be without feeling too loud or forced. The simple, somewhat stylized modern costuming by Beth Goldberg also lent the production a well-suited feeling of airy freshness.