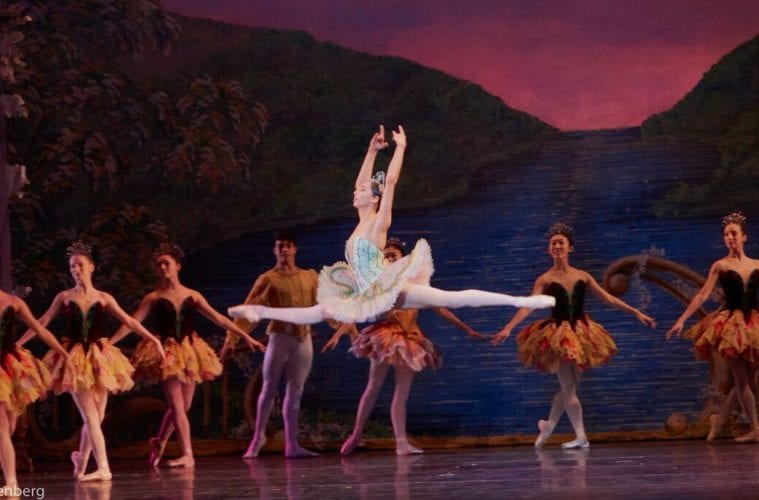 Audiences have one last chance to see Atlanta Ballet perform John McFall’s version of The Nutcracker (through December 28) before the company unveils a new version next December. But viewers shouldn’t expect the same production that’s warmed the Fox Theatre for the past 22 years. Last Sunday evening’s show was less a nostalgic vision and more a sign that the 88-year-old ballet company is going through a rough transition. It’s shifting between the aesthetic approaches of former artistic director McFall, who departed in 2016, and Gennadi Nedvigin, whom the board of trustees then appointed as artistic director with the understanding that he would build on the foundations established by previous artistic directors Dorothy Alexander, Robert Barnett and McFall.

Under McFall’s direction, Atlanta Ballet’s Nutcracker served as a main artery for sustaining a company aesthetic. “It’s not about the steps,” he has famously said about an ethos built on trust, collaboration and nurturing the individual artist’s heart, intellect and spirit. Dancers were encouraged to be comfortable with themselves and to trust one another, so they could be fearless on stage, and vulnerable in ways that could move an audience deeply.

McFall used the annual Nutcracker production to reinforce these values. He made sure dancers felt confident with the choreography so that they could use the production run to refine skills in partnering, working with an orchestra and connecting with an audience. With each Nutcracker, dancers deepened their connections to their roles and to each other. When new dancers came in, they were folded into this way of working.

Now, after large turnover last spring, only eight remaining dancers — 12, including apprentices — have experience working under McFall’s direction. Fifteen of Atlanta Ballet’s 32 company members and apprentices are new this year.

True to Nedvigin’s vision (shaped by his experience as a student at the Bolshoi Ballet school and principal dancer at San Francisco Ballet), every dancer has a beautiful body and excellent training. But they come from different backgrounds with training in different schools and styles, and with different ideas of what to go for as performers on stage. In general, their commonality appears to be medals and other accolades won in ballet competitions — McFall shied away from such competitions because he believed they missed the point, and they could ruin talent.

Most of the new dancers had not seen McFall’s version of The Nutcracker before joining the company and are unfamiliar with McFall’s aesthetic. The few remaining veterans, sprinkled among a large cast of children and new company members, weren’t enough to convey the fundamental values that McFall’s Nutcracker has carried forward year after year.

Dancers who transcended technique on Sunday were few and far between. Some new dancers struggled with partnering mechanics. Unable to inspire the choreography’s poetry and romance, they evoked the empty feeling of a couple who’ve lost their passion for each other, but remain together, going through the motions.

As Sugar Plum Fairy, Francesca Loi spent more time gazing out at the audience than relating to her partner. An accomplished technician, she could spin on a dime, then nail an extension with hard-edged bravura, not so much the gracious hostess we know as Sugar Plum, but more like a Black Swan.

The shell of the production remained. Peter Horne’s opulent sets, a continuation of the Fox Theatre’s lavish décor, enchanted as ever. Judanna Lynn’s costumes held their luster. Tchaikovsky’s score rolled along as Ari Pelto conducted the Atlanta Ballet Orchestra with a steady hand, and the Georgia Youth Choir performed the snow scene’s vocal parts with gentle vitality. The show has all the familiar scenes, but the company’s new dancers failed to embrace the ethos of the choreography.

Only a few of the individual dancers and couples were able to bring together Nedvigin’s technical emphasis and McFall’s passion for dancing with heart and soul. Guest artist (and former company dancer) Nathan Griswold returned to portray the magically inclined toymaker, Dr. Drosselmeyer, with depth and clarity. He was an anchor for the first act, guiding his younger stage companions through the story as he orchestrated Marya’s transformation from girlhood into maturity.

An ensemble of Snowflakes brought a crisp sense of joy to the choreography’s spiraling reaches and open-lined suspensions. Many of these dancers also appeared in “Waltz of the Flowers,” and both sections were exceedingly well-rehearsed. In the second act, Alexandre Barros (another veteran dancer) stepped up as Cavalier, gliding through turning leaps, and springing higher and higher in his entrechats with captivating ease.

Jackie Nash and Jared Tan, who both worked under McFall, danced the Spanish variation with fiery passion, emanating an energy that seemed to absorb the stage’s vivid hues and translate the energy of color into the dynamism of motion. Similarly, the two responded to Tchaikovsky’s music and to each other, which brought a fuller experience to everything they did together. From the audience, it was lush and thrilling.

Anderson Souza, in his second year with Atlanta Ballet, gave two standout solo performances — first as male Meissen Doll, and later in the Chinese variation. Both parts showed his gifts for speed, precise footwork and lofty elevation, which Souza combined with genuine warmth to an exhilarating effect.

Company newcomer Emily Carrico made a strong first impression as Dew Drop Fairy. Clad in a sparkling sea foam tutu and soft pink, Carrico traveled across the stage with calm authority and sparkling intelligence, lilting through waltz steps with velvet port de bras and an almost spiritual sense of levity.

These standouts weren’t enough for the production to cast the spell that Atlanta audiences have come to expect. Ballet officials say a heavy fall rehearsal schedule, and the need to coordinate schedules of several in-demand choreographers, left the company only about three weeks to prepare the production. Since August, company dancers have learned eight ballets and have already begun work on choreographers Yuri Possokhov’s new Nutcracker that debuts in 2018.

But the reasoning behind the decision to start this year’s Nutcracker rehearsals as late as November 14, to invest so little time in such an important moment in the season, is as difficult to understand as the fact that Nedvigin spent the ballet’s first weekend in Moscow to attend a world premiere performance there, rather than being present in Atlanta for the opening. The Nutcracker was the Atlanta Ballet debut of 15 new dancers. It was the company’s season opener and a primary vehicle for audience building, outreach and education. For many Atlantans, it is the only ballet production they attend; last year, The Nutcracker represented 73 percent of earned ticket revenue.

The Nutcracker is the foundation of each Atlanta Ballet season, both in terms of income and showcasing the company before casual fans. It was especially important this year because most of the company’s star dancers left at the end of the last season, and these shows are giving audiences their first impression of what is essentially a new company.

The decision to minimize rehearsal time was a bit like narrowing one of the city’s main traffic arteries. A few pass through, while others take various side streets, urgently trying to connect with the city’s heart, without knowing how to reach their destination.

(Editor’s Note: At the invitation of Atlanta Ballet, Cynthia Perry went to see the “A cast” of the Nutcracker, the dancers who worked most closely with McFall when he returned to Atlanta a few weeks ago for rehearsals. This is her report.)

On Sunday afternoon, December 17, one of the Atlanta Ballet’s four Nutcracker casts showed that McFall’s version still has power to warm the heart and elevate the spirit.

In a packed Fox Theatre, the ballet unfolded in a seamless and sparkling arc. As Marya, Saho Kumagai brought emotional depth to her character, a girl transforming into a young woman. Kumagai revealed a complex individual who experiences wonder, new sensations, fear and exhilaration, all projected to the back of the house with luminous, open lines. The party ensemble danced with crisp buoyancy  and emotional texture, and Kumagai’s fight with the Rat King was both harrowing and wrenching.

Snow Queen and King, Jackie Nash and Alexandre Barros, conjured an entrancing change in the weather. Jacob Bush partnered Sugar Plum Fairy Emily Carrico with understated strength and unfettered joy, and Nadia Mara’s Dew Drop Fairy captured the subtlety of Tchaikovsky’s delicate timbres. It was evident that this cast — different from last Sunday evening’s — had pulled together as part of a cohesive whole. It seems this particular rendition of McFall’s Nutcracker met the maestro’s standard of enchantment.