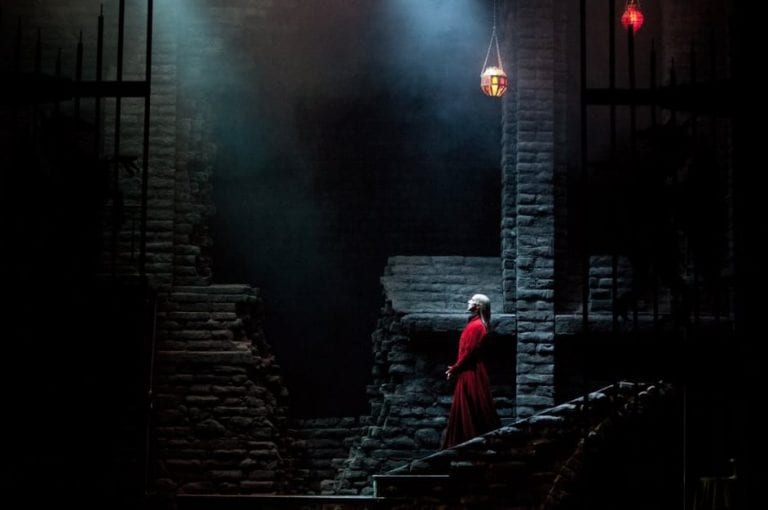 Atlanta Ballet, with the return of British choreographer Michael Pink’s “Dracula,” deliciously mixes pleasure and pain in this blood-spattered love story. Forget roses and chocolate for Valentine’s Day; “Dracula,” with its sumptuous costumes, extraordinary set design and exquisite dancing, is the real treat this week.

Based on Bram Stoker’s 1897 novel, “Dracula,” which runs through February 16 at the Cobb Energy Performing Arts Centre, offers a refreshing twist on the narrative ballet and proof that the genre can still feel relevant. Oftentimes, story ballets can get bogged down in pantomime that’s difficult to follow. And gender roles — women look delicate and pretty, men lift and adore them — can get stuck in the 19th century. Happily, Pink’s choreography is light on pantomime, and the movement for both men and women is theme-appropriate. He allows the choreography to carry much of the emotional weight, and the result is a visceral experience for the audience.

But I admit: at first I was skeptical. The prologue sets up a cinematic — that is to say, overly dramatized and anguished — world. After a whirlwind of images, fuzzy behind an almost transparent screen, the word “Dracula” is projected in huge, bloody letters. Thankfully, this melodramatic opening quickly gives way to nuanced, smart choreography and inspired performances by many of Atlanta Ballet’s stars and the corps de ballet alike.

In Act I, when the villagers enact a circular, ritualistic dance, the movement is grounded and hypnotically repetitive. No need for mimed explanation; it’s the choreography, as dancers thrash and roll with reckless abandon, that tells the story.

Veteran dancer John Welker is (almost literally) breathtaking as the stoic Count Dracula. When the legendary vampire makes his first appearance, one can almost feel the room cool and the air tighten. In what becomes one of the evening’s most striking images, he floats down the spiral staircase in a blood-red robe, head thrown back, hands clasped in a gesture of eternal patience. Welker doesn’t just dance the role, he lives it. Even when he bows, he is still Dracula, moving slowly, as cold and methodical as a serial killer.

Rachel Van Buskirk is equally enchanting as Lucy Westenra, a vivacious young woman who undergoes an unforgettable transformation. As Lucy, Buskirk exudes charming innocence, but her fearless dancing gives the character an edge. She takes command of the stage and glides effortlessly through complicated and physically demanding jumps and turns; we know from the start that this woman is no victim. Mina Harker, danced by Nadia Mara, is a more conventionally feminine role, too often fearful and dependent on men. An exception is Mara’s powerful duet with the mad Renfield, danced with surprising ferocity by Jesse Tyler.

Pink is a master of duets, and in “Dracula” they are most satisfying when unexpected, intricate partnering moments draw us into the characters’ complicated relationships. Recently retired dancer Brian Wallenberg, who plays the role of Jonathan Harker as a guest artist, is at his best in an eerie, homoerotic duet with Welker. Wallenberg’s face is contorted in panic, his body writhing and twisting, as Welker lifts and repeatedly drags him to the bed with fluid coldness.

Later, in a tense duet between Welker and Buskirk, we see the count’s inner conflict as he oscillates between rapt adoration and detached cruelty toward her. When he lifts her, he is often not looking at her (a marked change from classical ballet), and we catch a glimpse of the count’s humanity. Perhaps he feels guilty for what he knows is the inevitable outcome.

The more conventional balletic movements — a flashy leap or the set-up for a series of pirouettes — feel jarring and out of place, and we are momentarily yanked out of this enticing world. But for most of the evening, Pink’s choreography is as wonderfully dark and twisted as the plotline.

The ballet is long — about two and a half hours, with two intermissions — but the last scene, featuring a large cast of the “undead,” more than makes up for the few slow parts. Sixteen dancers emerge from a dungeon-like set, creeping along the floor as the tension builds. Here, composer Philip Feeny’s chill-inducing score comes to a head as a frantic dance of death ensues. Like that passionate kiss — or was it a bite? — it will leave you breathless.