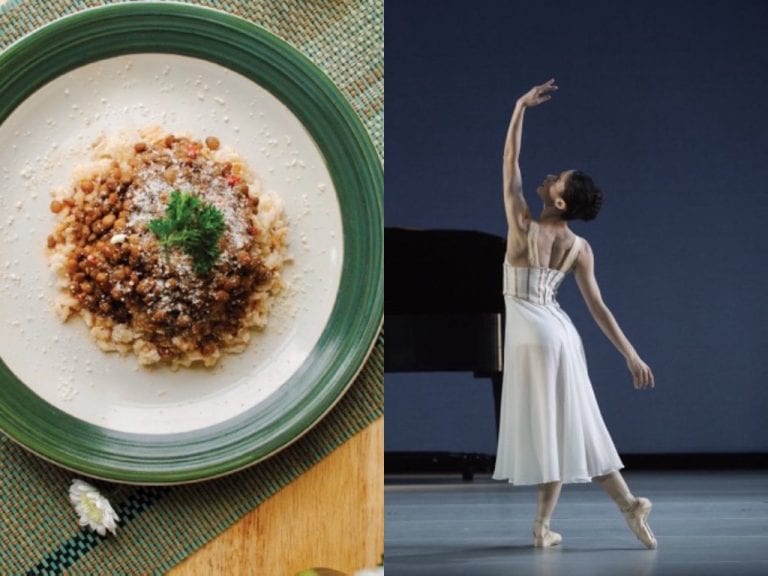 What keeps Atlanta Ballet dancer Nadia Mara going through a busy season? Guiso de lentejas, a dish from her native Uruguay. A new cookbook written by the dancers of the Atlanta Ballet offers recipes for favorite dishes. (Photo of Mara by Charlie McCullers)

For longtime dance fans, any mention of the words “ballet” and “cookbook” in the same breath tends to bring to mind Tanaquil Le Clercq’s 1966 classic The Ballet Cook Book. Though memorable (George Balanchine, for instance, contributed a recipe for horseradish ice cream to be served in generous scoops on top of tongue, pig’s knuckles or fish in aspic), the dishes are not ones most people hanker after every day.

The same can’t be said for the appealing recipes in the small but charming new cookbook Bravo!: A Cookbook by the Atlanta Ballet Dancers featuring contributions from the principal dancers of the Atlanta Ballet. 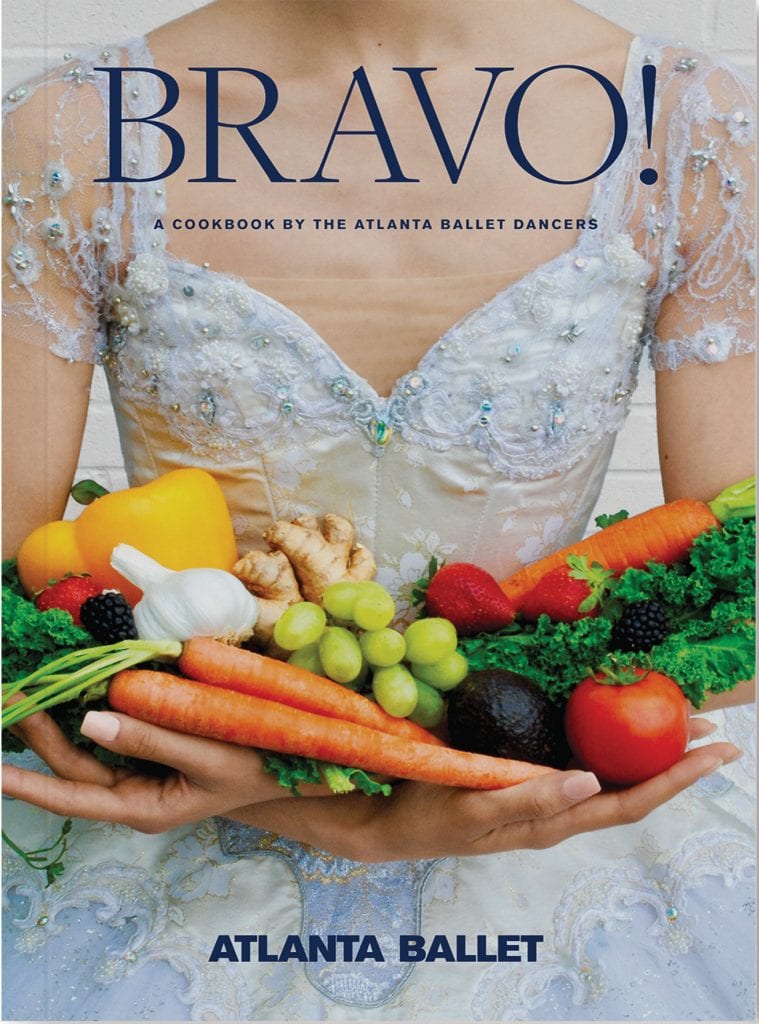 Merited or not, ballet often has a reputation for being stodgy, dusty and culturally monolithic. Regardless, dancers themselves are young and international in their origins and outlook, and that’s clearly reflected in the recipes here. Madrid-native Sergio Masero-Olarte offers a recipe for tortilla española that — in classic Spanish style — doesn’t skimp on the olive oil. Airi Igarashi of Gunma, Japan, offers up a chan-chan-yaki, a Japanese method for cooking salmon with miso and vegetables, and Saho Kumagai offers Japanese Chicken Piccata, which, she points out, though originally an Italian dish, is given a slightly different spin when made with eggs in Japan.

Miguel Angel Montoya offers a tasty recipe for traditional Colombian arepas with several variations for toppings, including shrimp with tangy hogao sauce, a beautifully simple balance of the sharp flavors of tomatoes, scallions, garlic and cumin. In her tips for Korean kimchijeon pancakes, spicy with kimchi and a touch of its tangy, salty broth, dancer Sujin Han points out (correctly) that the thinner the batter is in the pan, the crispier the pancake will be. Han’s other contributions include bulgogi (thin, marinated slices of grilled beef) served with glass noodles and sweet potato mat tang (crispy fried sweet potatoes) topped with a sugar and almond glaze.

I’ve read nearly every cookbook I can get my hands on and tried nearly as many recipes, so it was delightful to come across so many that were new to me. Dancer Nadia Mara contributes a recipe for Guiso de lentejas, a traditional lentil stew from her native Uruguay. In introducing the recipe, she comments that she makes a hearty batch of it as Nutcracker season approaches to keep her warm and healthy during that challenging marathon of December performances. With its red wine, smoked paprika and generous minced garlic, it seems like just the thing for cold winter nights, even if you’re not dancing the role of the Sugar Plum Fairy.

Making Le Clercq and Balanchine’s horseradish ice cream with roasted tongue could easily take up the better part of an afternoon, but today’s dancers (and similarly busy cooks) have to learn to manage their time well. Many of the recipes, though exotic, have an admirably short list of easily attainable ingredients, and many, such as Emily Carrico’s avocado hummus or Juliana Missano’s sweet but healthy Energy Bites, are clearly just the thing to whip up in a hurry and keep around in big batches. Most of the recipes are health-conscious, but I also liked the decadent, calories-be-damned final recipe for caramel cake offered by North Carolina-native Dylan Clinard.

Dancers’ prefatory notes about the recipes add a nice personal touch, but they’re all too often disappointingly brief: we want to know about the person and their relationship to the dish just as much, if not more, than we want to know about the food. The slim cookbook itself could likewise be thicker, and it could conceivably extend its reach across and beyond the company: choreographers, ballet mistresses, costumemakers, administrators and apprentices presumably cook and eat, too.

Still, the cookbook is a fun little volume that raises money for a good cause (proceeds go toward the Dancers’ Resource Fund, which supports dancers as they transition into second careers after they retire from the stage). Cooks who dive in will likely end up every bit as surprised and delighted as I was by how fun and handy the recipes are to add to your repertoire. 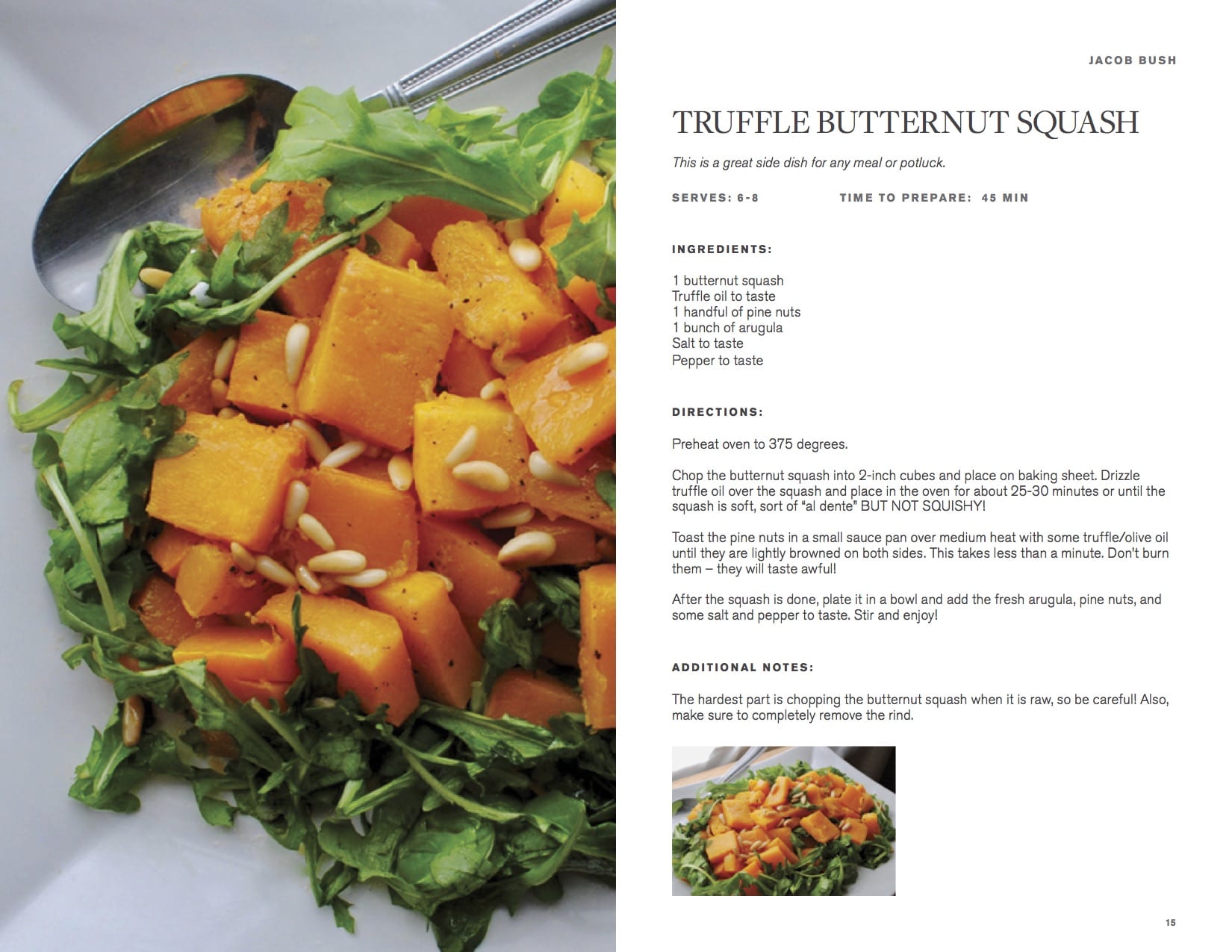