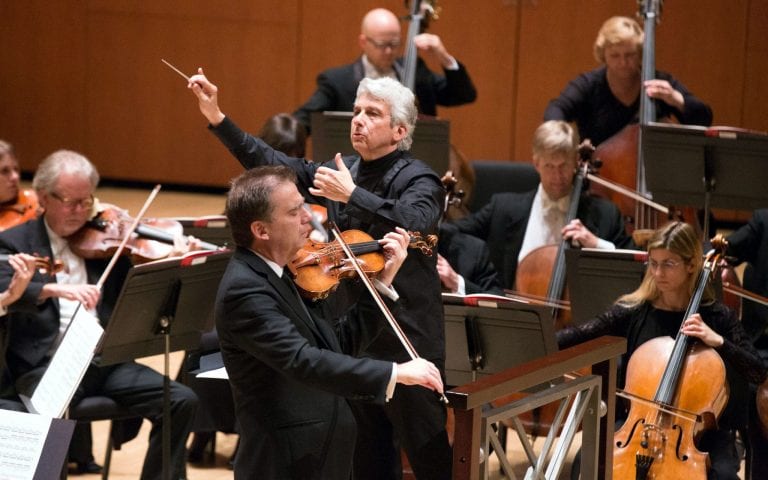 Review: ASO rings the bell with Oundjian and Robert McDuffie on Berlioz and Glass

The concert opened with the Violin Concerto No. 2 by Philip Glass. Subtitled “The American Four Seasons,” it was a fitting choice. It was composed for McDuffie, who requested the concerto to be a companion piece to Antonio Vivaldi’s “The Four Seasons.” McDuffie premiered it in late 2009 with Oundjian conducting the Toronto Symphony Orchestra.

Glass does not title the movements, leaving them only numbered, so that it’s up to the listener to determine how they relate to the “seasons.” In addition, instead of a cadenza normally included in a concerto, Glass gives the soloist a prelude and three unaccompanied “songs” as interludes between movements.

McDuffie aggressively played his violin, often leaning angularly toward the audience as if he would leap off the stage at any moment. He was more relaxed during the music’s more introspective moments, as in the solo interludes, but never without a certain inner tensile strength to his stance. The final movement was a physical workout of persistence and velocity.

The concerto is scored for solo violin, strings and synthesizer. Typically, composers will use a synthesizer in an orchestral work as a peripheral instrument, a kind of special effect. With Glass, however, synthesis has been at the core of much of his music, so it is not surprising that in this concerto the synthesizer is embedded at the center of the ensemble and fully integrated into the orchestral sound. ASO principal pianist Peter Marshall played the extensive synthesizer part on a Roland RD-700GX, utilizing digitally synthesized tones entirely native to the instrument.

Oundjian is music director of the Toronto Symphony Orchestra. His previous appearance with the ASO as guest conductor was in January 2014, when he led the orchestra in music by Vaughan Williams, Mozart and Dvořák. Oundjian began his career as a prize-winning violinist and was first violinist of the esteemed Tokyo String Quartet for 14 years, but a repetitive stress injury forced him to shift his full focus to conducting.

On June 17, McDuffie and Oundjian will again collaborate in a project with huge Georgia connections: the world premiere of the Concerto for Violin, Rock Band, and String Orchestra by Mike Mills of the iconic rock band R.E.M. The premiere will take place in Toronto, Ontario as part of a 10 p.m. “Late Night” concert by the Toronto Symphony Orchestra. Mills and McDuffie are longtime friends who grew up together in Macon. Future performances of Mills’ concerto in Macon and Atlanta will take place this fall, as part of a larger U.S. tour. 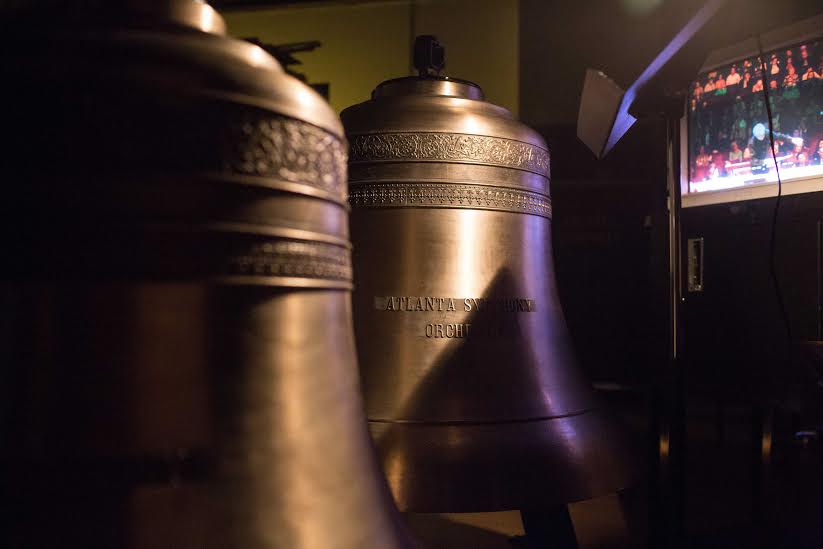 After intermission came “Symphonie fantastique” by Hector Berlioz. In contrast to Glass’ concerto being only vaguely implicit about portraying the seasons, Berlioz’s symphony is programmatically explicit, in spades. It self-references the composer as a lovesick young man in love with Irish Shakespearean actress Harriet Smithson, whom Berlioz had seen perform the roles of Ophelia and Juliet with a theatrical company that was touring Paris. He immediately fell in love with Smithson, which inspired “Symphonie fantastique.”

As for the storyline behind the music, the protagonist takes a not-quite-fatal dose of opium, resulting in fantastic dreams about his love, which evolved into more nightmarish hallucinations. The late American conductor Leonard Bernstein once described it in a nutshell: “You take a trip, you wind up screaming at your own funeral.”

But it takes a while to get to that point, and in the third movement, “Scene in the Country,” there is a pastoral atmosphere with an exchange between two piping shepherds, represented by the dulcet tones of English horn and the oboe, beautifully played by Emily Brebach and Elizabeth Koch Tiscione respectively.

Just before the symphony’s final movement, entitled “Dream of a Witches’ Sabbath,” ASO acting principal percussionist Charles Settle quietly slipped offstage to a position behind two enormous bronze church bells. At measure 102, he began to ring a three-note death knell (C, C, G) that would be repeated at times over an ominous rendition of the “Dies irae” chant played by bassoons and tubas.

Atlanta is one of a small group of U.S. orchestras to own a set of large church bells created to match the requirements of the Berlioz score. They were acquired thanks to a trust established by the late Eugene Rehm, percussionist in the ASO for 49 seasons before retiring in 2003. The bells were first used by the ASO in their last performance of “Symphonie fantastique” in January 2014.

For this concert, Oundjian and the orchestra worked the final movement into a wild frenzy that afforded a thrilling ending to the evening.