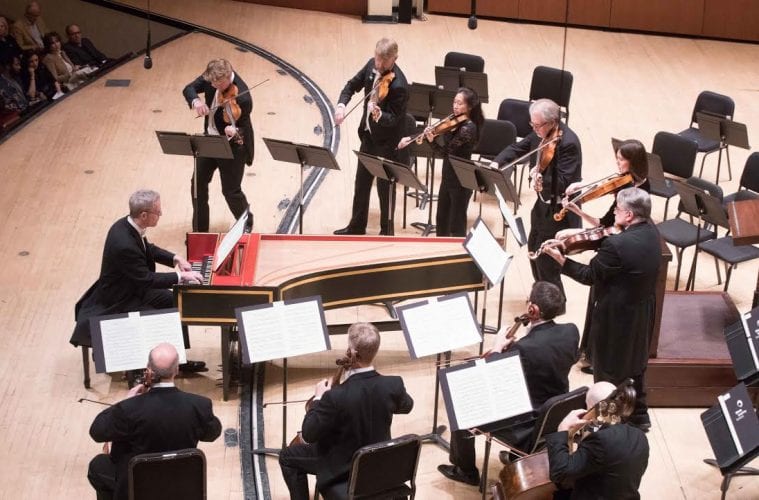 Thursday’s concert marked the return of music director Robert Spano to the ASO podium, after a bout with acute bronchitis forced him to step away from conducting concerts at the end of January and the first week of February.

The order of the first two pieces in the printed program was swapped, so the concert opened with J.S. Bach’s Orchestral Suite No. 3. As he did with Bach’s B-Minor Mass in 2013, Spano conducted without a baton. The swap was a good choice, as the suite’s five movements lent brightness and grace to the beginning of the concert, in contrast to the considerably darker theme of the work to follow. It was lively, the inclusion of winds and timpani lending a festive quality, while the famous “Air” was reserved in its patient lyricism, but a little bottom-heavy in terms of orchestral balance, and one would have liked to have heard the melody stand out a little more.

Next, the ASO Chamber Chorus came onstage for the premiere of a new choral-orchestral work by one of its own — contrabassist Michael Kurth — entitled “Miserere,” with mezzo-soprano Kelley O’Connor as vocal soloist. It was not the first time O’Connor has soloed in a premiere of one of Kurth’s choral works. She was also the featured soloist for Kurth’s nine-movement “Magnificat” that premiered in 2016 — not with the ASO, but as part of a concert at Peachtree Presebyterian Church in Buckhead. Since then, another Kurth choral work with a small orchestra, “Tenebrae,” was premiered there in 2017 during a Maundy Thursday worship service.

One of the important factors that connect all three of these Kurth choral works is the inclusion of texts by Atlanta poet Jesse Breite, a member of the Upper School English faculty at the Westminster Schools. In this new “Miserere,” two of the eight movements are settings of poetry by Breite, while the other six draw from Old Testament Biblical sources: the titular Psalm 51 (“Miserere mei Deus… ” — “Have mercy on me, O God…”) and Psalm 37, both sung in Latin; English translations from Psalm 137 (“By the rivers of Babylon we sat and wept when we remembered Zion”) and the first chapter of the Book of Lamentations (“How deserted lies the city, once so full of people”).

Set up by the penitential character of the Old Testament texts, Breite’s two poems respectively reexamine the inner voices of New Testament figures Judas (betrayal) and Thomas (doubt) within the work’s overarching theme of iniquity and penitence — the battle against with evil within — in modern context, but compatible with the feeling of loss and desolation and pressing for acknowledgment of shortcomings and the human struggle with our dark angels within.

O’Connor’s lovely voice too often felt covered by the overall texture of the music, but its presence above the asymmetrically rhythmic undercurrent in the fifth movement lent added poignancy to Breite’s first text. As the work progressed, especially for much of the final movement, the choral parts felt more opaque than they should have for their more contrapuntal writing, though they came together clearly in the last few measures for a final, anguished and unified fortissimo outcry of “Miserere mei.”

After intermission came the musical highlight of the evening, Bach’s Brandenburg Concerto No. 3, performed by 11 members of the orchestra without Spano conducting. Instead, ASO keyboardist Peter Marshall sat at the harpsichord, back to audience, where the podium is normally located, with the 10 ASO string players in a semicircular formation, violinists and violists standing.

It felt naturally interactive as a big chamber ensemble. Everyone was a soloist, fully engaged in making the music work, as there are really no small, subordinate parts in this piece —  three violins, three violas, three cellos, well-grounded by the continuo of contrabass and harpsichord. It was a delightful, totally tight and vivid performance of the well-known concerto grosso.

After a necessary change of stage setup, Spano, the chorus and the rest of the orchestra, O’Connor and fellow vocal soloists Kim-Lillian Strebel, David Walton and Hadleigh Adams took the stage for Bach’s Cantata No. 80, “Ein feste Burg ist unser Gott,” BWV 80.

As much as Kurth’s “Miserere” deals with the struggle with evil from within, Bach’s Cantata No. 80 addresses an externalized war with evil, the only defense coming from faith in an Almighty God. Literally “Our God is a solid castle,” the Lutheran hymn and tune upon which the cantata is based is most often sung in English as “A mighty fortress is our God.” Unlike the internal human stumbling blocks into which Kurth’s “Miserere” delves darkly, for Bach and the author of the text it is an externalized “old enemy” which has to be kept at bay.

In the cantata’s first movement, the ASO Chamber Chorus did its best work of the evening. To some degree, the solo quartet seemed mismatched, but all four never sang together at once. Baritone Adams had focused power and presence aplenty but also felt like he was on the front edge of the tempo ahead of the orchestra in his duo aria with soprano Strebel, whose more rounded-edged voice contrarily seemed to ride on the back edge of the pulse. Adams felt more in sync in his recitative that followed.

In another recitative, the bright-voiced Walton seemed right down the traditional line of a fine Bach tenor. He subsequently sang a duo aria with O’Connor, which came off rather well. The final iteration of chorale by the chorus, however, felt a bit too warm and soft-edged, and a firmer, more resilient character would have better closed the work.