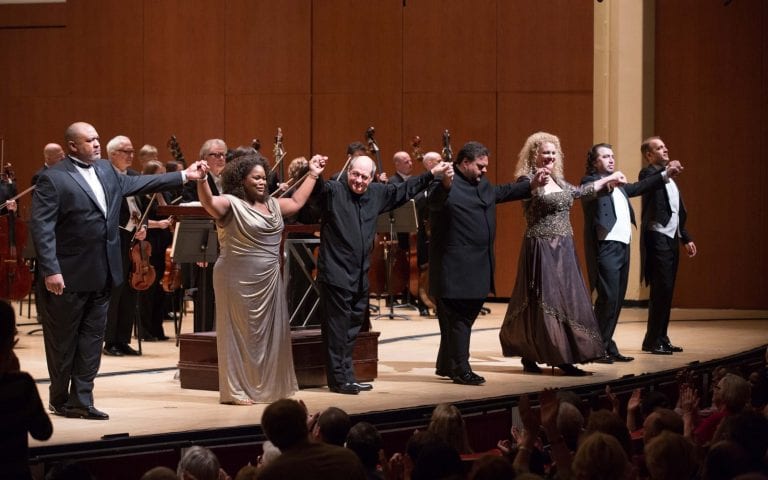 Review: ASO and Chorus round out the season with an epic bang performing Verdi’s “Aida”

This is the final week of the Atlanta Symphony Orchestra’s 2013–14 season’s classical subscription concerts at Symphony Hall, and the production is a biggie: Giuseppe Verdi’s complete four-act opera Aida in concert version. ASO music director Robert Spano led the assembled forces, which included eight featured vocal soloists and the Atlanta Symphony Orchestra Chorus. The performance will be repeated Saturday at 7:30 p.m. and Sunday afternoon at 2 p.m.

The solo cast, in order of vocal appearance, were bass Burak Bilgili as Ramfis, the High Priest; tenor Stuart Neill as military hero Radamès; mezzo-soprano Michelle DeYoung as Amneris, daughter of the King (Pharaoh) of Egypt ; soprano Latonia Moore in the title role of Aida, an Ethiopian princess who is slave to Amneris; bass Evan Boyer as the King of Egypt; tenor Grant Knox as a messenger; Kearstin Piper Brown as the voice of the High Priestess; and baritone Gordon Hawkins as Amonasro.

The opera premiered in 1871 at the Khedivial Opera House in Cairo, Egypt. In addition to a sure-fire core premise of ill-matched lovers in a triangle of intrigue and jealousy, Aida incorporates some of Verdi’s favorite themes: family relationships (in this case fathers and daughters), mistrust of religious leaders and loyalty to one’s native country and its people.

In a nutshell, Amneris is in love with Radamès, who does not return her love because he is secretly in love with Aida. Adding to the difficulty, the hero’s public reputation comes from leading Egyptian forces in victorious battle against, naturally, those of Ethiopia. Since he was chosen for that task by the goddess Isis, according to the High Priest, religious authority has its hand in the final consequences of Radamès’ subsequent choices.

Radamès has lots of opportunities to make pragmatic decisions along the way, but love is hardly pragmatic, often preferring more fatal resolutions to story lines in opera. In the end, Radamès the hero is branded as traitor and, unwilling to defend himself, is sentenced to die by being buried alive in an underground vault, where Aida secretly had hidden herself in advance, so the two would be united in love and death.

Aida is one of the triad of Verdi’s final operas, along with Otello and Falstaff, which attract conductors who have operatic experience but are better known for their orchestral work — in part, because of the rich orchestral palette that they offer. So it is not surprising for Spano to want to close the season with a bang with a concert version of Aida. The opera does, however, make for an exceedingly long concert by normal symphonic standards. The duration of the entire, with two intermissions, ran 190 minutes, about 10 minutes longer than anticipated.

The unquestioned star of the show was Moore in the title role. She maintained the lovely vocal color of her liquid soprano across a dynamic range from an intimate pianissimo to peeling paint off the back wall. DeYoung made for an ardent, impassioned Amneris, Aida’s powerful foil and rival for Radamès’ affections. Moore and DeYoung played the same roles across from each other last July at Cincinnati Opera.

Neill, impressive as Radamès, had perhaps the most demanding role in the opera, as much as anything because of the shifting vocal requirements, especially at the end of the third and in the fourth act. If anyone is wondering, this is the primary reason for an intermission between Act III and IV, even though there was no set to change in this concert version. The first two acts were performed without intermission, but an intermission is absolutely necessary between the final acts.

Philadelphia-based Turkish bass Bilgili, with his large, well-rounded voice, was forceful as the High Priest. Baritone Hawkins was dramatically convincing as Amonasro, especially in the intense father-daughter interactions with Moore. The smaller voices of Knox and Brown were adequately suited to their minor roles, but one wished that Boyer, who sang his role well, could have had a vocal size closer to that of Bilgili.

The ASO Chorus, in their usual position on risers at the back, dug well into their various roles as priests and priestesses, soldiers, slaves, prisoners and the like. The only grievous omission to come from the opera being unstaged was the absence of the elephants. Elephants would have been fun.