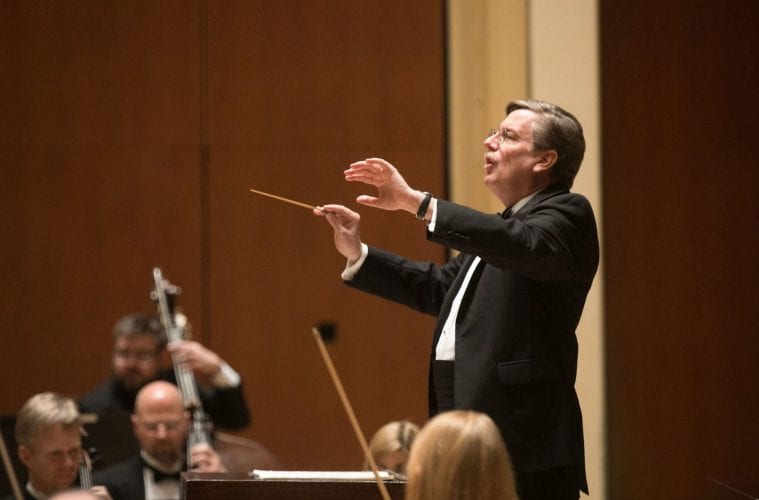 On Thursday evening the Atlanta Symphony Orchestra and ASO Chamber Chorus, led by director of choruses Norman Mackenzie, performed Vivaldi’s Gloria in D major and Part I of Handel’s Messiah to a sold-out house, with soprano Jessica Rivera, mezzo-soprano Kelley O’Connor, tenor Cullen Gandy and baritone Gerard Sundberg as guest soloists. The concert will be repeated on Sunday at Hodgson Hall, on the University of Georgia campus in Athens.

Performances of Part I of Handel’s Messiah (also known as the “Christmas portion”) have had a nearly ubiquitous presence in the Anglo-American choral music community during the holiday weeks between Thanksgiving and Christmas. The ASO used to mount a Christmastime Messiah annually, each time pairing it with a different, shorter piece for the concert’s first half. Last year, which was heavy in choral repertoire anyway due to the Robert Shaw Centennial celebrations, the ASO skipped over its annual Christmas Messiah presentation. The tradition was restored this week, this time paired with Vivaldi’s Gloria.

The chamber chorus and vocal soloists shone well in both, underpinned by the relatively small orchestral forces required. The reduced complement of strings evidently allowed some of those principal stands of players a deserved night off: subbing in the concertmaster’s seat was violinist Anastasia Agapova, who has gained local public attention since she joined the orchestra in the 2013-14 season; sitting in the principal cello seat for the evening, with important responsibility as part of the “continuo” part in both works, was assistant principal Karen Freer. Both served as excellent reminders of the depth of the ASO team’s bench.

Vivaldi wrote two settings of the liturgical Gloria text in the key of D major. This one, by far the more familiar one, is tagged with the catalog number RV 589. It is a favorite choice for performance by community, school and church choruses, even if a bit behind the Christmas portion of Messiah in overall public popularity, but about half as long.

Of the vocal soloists, the Gloria only required the soprano and mezzo. Two Atlanta audience favorites, Rivera and O’Connor excelled in both works. Rivera was sparkling and agile, and O’Connor warmly expressive. In the Gloria‘s lilting “Domine Deus, Rex coelestis” movement, principal oboist Elizabeth Koch Tiscione came forward on the stage for a lovely, lyrical featured duet with Rivera.

In Messiah, Atlanta-born Gandy’s lyric tenor well-suited his rendition of “Comfort ye my people” and “Every valley shall be exalted” without becoming strident. Sundberg, who has a long history of performing Messiah with Mackenzie and the ASO, demonstrated his lyrical quality of baritone without being overbearing in the heaven-shaking drama Handel placed in his solos.

It all came to a climax with the famed “Hallelujah!” chorus, typically appended to performances Part I, although it is actually the conclusion of Part II when performed outside of the entire oratorio. It was, of course, the number the crowd was waiting for all evening. In another longtime tradition, if of apocryphal origin, the audience stood as its signature strains began — a few timidly singing along, perhaps wondering if it was okay to do so. What came from the stage, however, was the most robust performance of the evening and a clear signal of the concert’s imminent conclusion. It was an especially joyous conclusion to what was a consistently joyful concert.