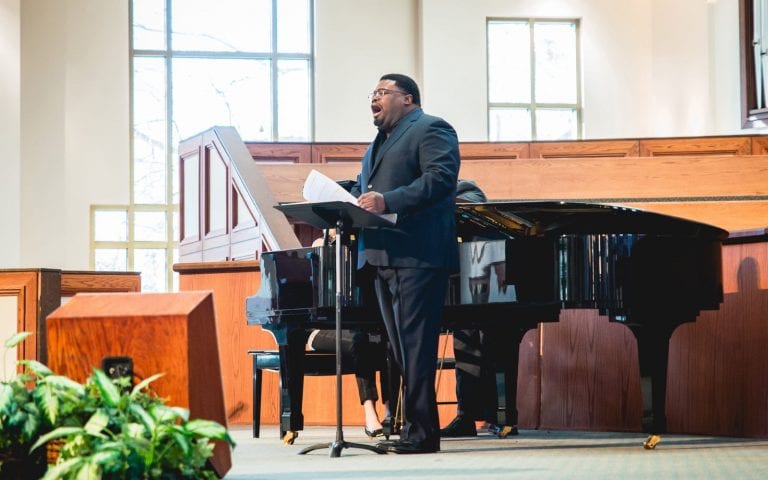 A native of Miami, Florida, Thomas is increasingly in demand in both concert and opera as both a vocal and dramatic talent. Most recently, Thomas took part in the English National Opera’s production of John Adams’ The Gospel According to the Other Mary in the role of Lazarus this past November and early December.

He will also perform this spring in the roles of Pollione in Bellini’s Norma at the Queen Sofía Palace of the Arts (Valencia, Spain) in March, as the title role in Gounod’s Faust with Michigan Opera Theatre in May and Manrico in Verdi’s Il Trovatore with Cincinnati Opera in June.

Although the Woodruff Arts Center’s lockout of ASO musicians delayed his artist in residence debut this past fall — his first appearance with the orchestra was in December’s “Christmas with the ASO” concerts — Thomas’ work here with the ASO is now in full swing. The first of a trio of free afternoon public recitals took place January 11 at the Porter Sanford III Performing Arts and Community Center in south DeKalb County. Saturday’s recital at Ebenezer Baptist Church was the second in the series.

Thomas, Pridgen and ASO principal horn Brice Andrus opened the program with Franz Schubert’s nine-minute song “Auf dem Strom” (“On the River”), based on poetry by Ludwig Rellstab. The poetry can be viewed as a metaphor for death. Although its premiere took place on the first anniversary of the death of Beethoven, Schubert never implied publicly that it was in memoriam to the elder composer. The horn part is every bit as musically substantial as the tenor part, acting like a wordless second voice in duet. Andrus and Thomas were balanced in their respective roles, underscored by Pridgen’s piano.

Beethoven’s “An die ferne Geliebte” (“To the distant beloved”) is a setting of six poems by Alois Jeitteles, a writer and medical student living in Vienna. The poems speak of a longing for a love far away. Written in 1816, it’s believed to have been the first true song cycle by a major composer, the precursor of those by the next generation composers such as Schubert. As in the Schubert, Thomas brought clear, expressive detail to the performance.

For the final part of the recital’s first half, Thomas and Pridgen performed three songs that would be very familiar to older churchgoers: “The Holy City” by Stephen Adams (the pseudonym under which English composer and singer Michael Maybrick composed it), the traditional spiritual “Sometimes I Feel Like A Motherless Child” as arranged by Harry T. Burleigh (pronounced “Burly”) and “The Lord’s Prayer” by Albert Hay Malotte.

All of these songs are all too frequently performed in church with overwrought sentimentality and vocal affect. Thomas gave them each a truly dignified rendering they don’t often receive, with stunning results. The Burleigh arrangement in particular demonstrated how his powerful voice can be controlled to a fine, true pianissimo, a capability he used to give the song a beautiful overall dynamic arc and poignant expression. It also allowed Pridgen to play in a more delicate manner that made one notice Burleigh’s gently luminous harmonies in the piano part.

Thomas and Pridgen — joined by ASO violinists Justin Bruns and Sou-Chun Su, violist Reid Harris and cellist Christopher Rex — concluded with “On Wenlock Edge” by Ralph Vaughan Williams. Scored for tenor and piano quintet, the 25-minute song cycle, the longest of the afternoon, is a setting of six poems from the collection A Shropshire Lad by A. E. Housman, with its themes of rural life in the English west midlands and the early deaths of young men.

The cycle rounded out what seemed to be the overarching theme of the entire recital: a pensive sense of longing, emotional depth despite distance, and our ultimate mortality — the need to live fully now, because death can take us at any time.

Thomas’ final recital in the set will take place on Sunday afternoon, April 19, at Morehouse College’s Ray Charles Performing Arts Center, in which he will be joined by members of the ASO and the Morehouse College Glee Club.