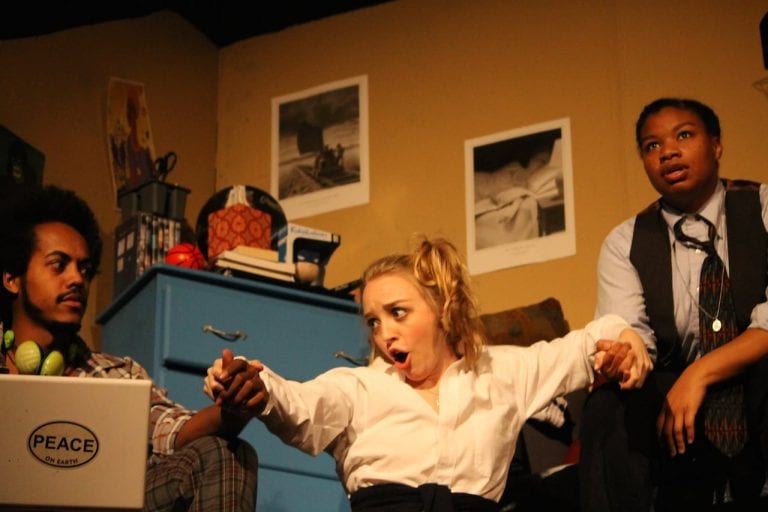 The beauty of the new production fml: how Carson McCullers saved my life is that it’s able to create its own distinct world while drawing clear, affectionate parallels with Georgia native McCullers’ defining work, The Heart Is a Lonely Hunter. Sarah Gubbins’ play, running through February 22 at 7 Stages, could use a tighter structure but is nonetheless a smart, engaging work.

Gubbins, who also wrote Actor’s Express’ 2009 exceptional romantic comedy Fair Use, developed this for Steppenwolf Theatre Company in Chicago before a workshop version was produced at the Alliance Theatre; now comes this regional premiere.

Its central character is having a tough time. Young Jo (Renita James), 15 years old, has long sensed she is not like her other classmates at her Catholic school in Chicago. Her best friend is Mickey (Troy Stephens) and they share a bond. She is a lesbian and he is gay, although the two are still learning how to deal with that, inwardly and outwardly. They don’t want others to find out, although some classmates seem to already be aware.

Two new people have impacts on Jo. First is Emma (Alexandra Ficken), a cheery blonde whose boyfriend is on the football team, with whom Jo becomes good friends. An English teacher, Ms. Delaney (Dorothy V. Bell), also has a profound effect on Jo’s life. Ms. Delaney has her own classroom style, replacing All Quiet on the Western Front with The Heart Is a Lonely Hunter as the first required reading assignment.

The play uses projected images of the graphic novel Jo is penning — divided into chapters — on both sides of the 7 Stages Black Box space, as well as a lot of projected text messaging. (For those not well-versed in texting slang, fml means “fuck my life.”) The animation of Jo’s novel by Kristen and Michael Haverty is so vivid, in fact, it sometimes threatens to eclipse the live action.

Funny at times, poignant at others, fml is observant and respectful of its characters. The production does get dark, however, with a sudden bullying incident, staged behind a curtain onstage but more graphically depicted via the images from the Havertys.

Gubbins has a sharp gift for dialogue and an eye here for how teenagers talk and communicate. It’s a lean play (90 minutes with no intermission) that works, but could cut deeper minus some of the interplay between the classmates. One of the characters has a drunken scene that lasts more than 15 minutes and severely interrupts the flow of the production.

In an intimate setting, director Heidi S. Howard — 7 Stages’ artistic director — utilizes almost all her space to advantageous effect, shifting the action from an upstairs bedroom, to a classroom, to a set of lockers, to a basketball court where Jo relaxes by shooting hoops.

Howard is using two casts for this production, a professional cast and what she has called a matinee cast composed of teenage actors who will take the stage at select times. It will be interesting to see what the younger players can do with the material, but many of the current cast members come across authentically.

James makes Jo a conflicted, three-dimensional character, trying to figure out who she is and how to move forward. In her own way, she is as isolated as John Singer from Heart. The performers playing her classmates don’t always fare as well, though. Stephens has a great physicality but he doesn’t always convince as Mickey. Neither does Ficken as Emma.

The most realistic scenes involve Ms. Delaney and Jo. Bell doesn’t make her character an over-the-top creature — she is matter of fact and personable. The two have a believable student-teacher relationship, especially as they realize they have a lot in common. The other character is Reed (well played by Kyle Segar), Jo’s older brother and something of a voice of reason to her.

fml is being staged in conjunction with a month-long slate of events, including Théâtre Du Rêve’s bullying play Jane, the Fox and Me and an event called the “Art of Activism” on February 15, featuring a panel discussion on bullying.

It’s a production that hasn’t gotten a lot of widespread local attention, especially in the wake of higher-profile shows such as Tuck Everlasting and Bad Jews. It’s still a ways from being perfect but its heart is definitely in the right place. Teenagers, in particular, should eat it up.