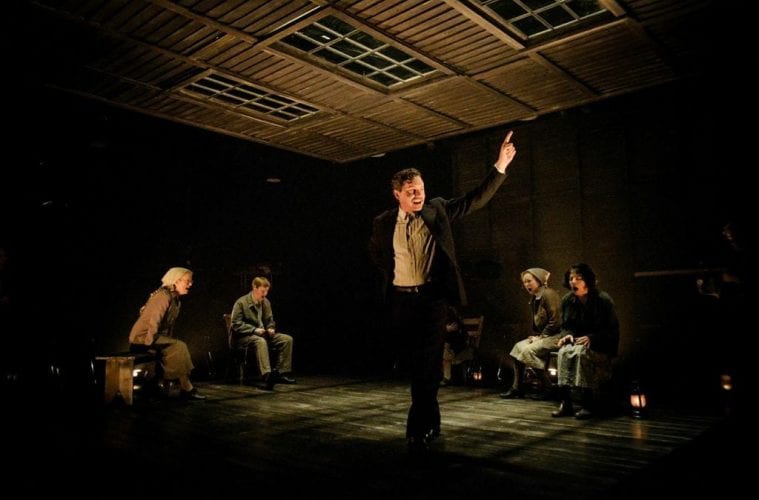 DePoy sees Edward Foote as part of a trilogy of plays.

A Southern Gothic tale peppered with Appalachian folk music, Edward Foote has been simmering around town for a bit now with local writer/playwright Phillip DePoy staging workshop versions and subtly tweaking it. Under the wings of the Alliance Theatre, a whole new team has worked on it over the last year and brought their seasonings.

Luckily, all the care is evident. Running through April 19 at the Alliance Hertz Stage, Edward Foote — making its world premiere — is slow-cooked to virtual perfection.

Foote is DePoy’s Oedipal take on a Depression-era Appalachian murder mystery, unravelling over the course of an evening and the following afternoon.

Ray Earl Redford (Steve Coulter) is a stranger who wanders into a mountain community one stormy night, making an appearance at a meeting hall full of townsfolk. Needing a place to stay, he is allowed to spend the night in the home of Preacher Reece (Jeremy Aggers) and then asked to stay for the next-day wedding of Reece and his younger wife-to-be Nigella (Ann Marie Gideon), an orphan he took in long ago. Many of the villagers have their own theory, but who the main character is in relation to the rest of the close-knit townsfolk is what the play is about. Suffice it to say there are some surprises along the way and people who may be more than they initially seem. That bloodshed will be forthcoming is almost a given.

The rest of the cast includes Bethany Anne Lind and Lowrey Brown as the Nevinses, a married couple, Hayley Platt and Trevor Winfield Goble as two young people and Scott DePoy and (real life wife) Jeannette DePoy as townspeople/musicians.

Edward Foote has mood galore, beginning with thunder in the background before the production even begins. Chris Coleman, the former artistic director of Actor’s Express who now runs Portland Center Stage, directs and gives the play an appropriately chilly tone.

The play is staged in the round, with stained windows on both sides courtesy of set designer Tony Cisek and characters walking in from all corners. The rest of the set may seem spare — chairs and a table here and there — but it conveys exactly what it needs to, abetted by Clay Benning’s sound and Seth Reiser’s lighting.

It’s a play that incorporates lots of songs, including authentic Sacred Harp and traditional Appalachian music, yet they never overwhelm the piece. That the cast can really sing together is a bonus.

It’s lean too — not even 90 minutes, sans an intermission — and has a wonderful cast. Gideon and Lind are two of the most interesting local actresses around. Gideon’s independent Nigella is a complicated creature, one moment seemingly young and frail, the next very capable of taking care of herself, while Lind’s initially simple Mrs. Nivens is anything but.

The central roles are fleshed out in two of the best acting jobs of the season. Coulter is fascinating as the central figure — and whether his character means harm or is trying to prevent it remains ambiguous for a while.

Although he’s been around as a performer for more than a decade, Aggers has rarely been this ferocious onstage. His soft-spoken Reece becomes scary in his intensity, dead-set in his views and what he expects from others. He and Coulter work particularly well together.

The play can be a little talky and might have one too many surprise revelations, yet overall it’s atmospheric and often blackly funny. This is territory that DePoy knows about and he doesn’t hurry his story-telling. This is a pro at work.

Altogether, Edward Foote is a terrific show that celebrates a local, prolific playwright and an all-Atlanta cast. DePoy has said that this production is the first in his “Appalachian trilogy,” which will include themes present in Shakespeare’s Macbeth as well as the mythological Tristan and Isolde. Let’s hope the Alliance Theatre’s Susan Booth has already cleared calendar space.