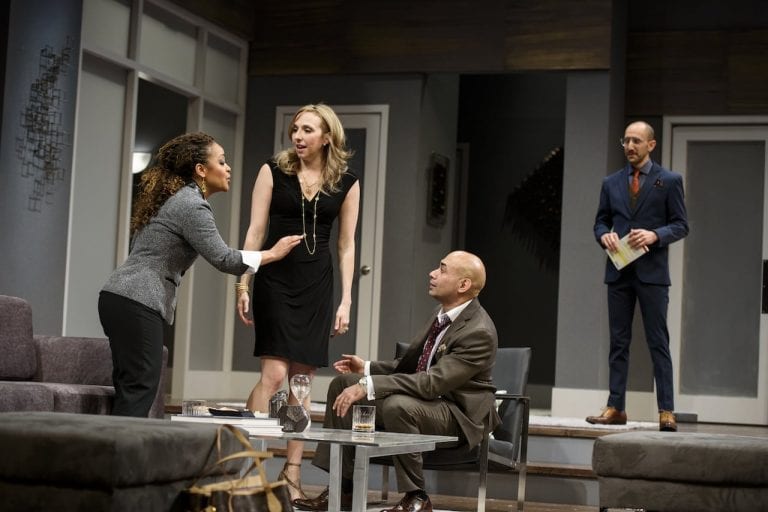 Review: Alliance’s “Disgraced” tells a provocative tale of race and religion, and tells it really well

Both a Pulitzer Prize winner and a 2015 Tony Award nominee for Best Play, Disgraced is one of the most talked about, provocative plays around, opening at the Alliance Theatre this week. Examining the struggles of Muslim-Americans, Disgraced culminates in an explosive, no-holds-barred dinner exchange between a Muslim-American lawyer (Andrew Ramcharan Guilarte), his artist wife (Courtney Patterson), an African-American lawyer (Tinashe Kajese-Bolden) and her Jewish art dealer husband (Andrew Benator).

Jim Farmer: Hello, Andrew! We both saw Disgraced Wednesday night. What were your thoughts?

Andrew Alexander: I thought Disgraced was a really strong show. Five excellent actors playing five interesting and complicated characters, each with a compelling story arc, in a sleek and visually effective production from the Alliance. It’s a “don’t miss” show, for sure. I was a little surprised; I’d heard so much about its “controversial aspects” and how it often sparks heated debate. I loved the show and its ideas, and there’s clearly a lot to talk about. But I honestly didn’t find much I’d care to debate. I suppose a lot of heated debates probably begin with that statement. With that in mind, I’ll tread carefully: What did you think?

Farmer: Well, my first reaction was to go home and grab an ice pack. My head hurt, but the bruise is healing. I found it to be a really intense evening of theater. Very thought provoking and full of — as you mentioned — five interesting, incredibly complex characters. It builds up slowly to the infamous dinner table sequence which becomes almost frightening, with the characters going at it and challenging each other.

I think what the play does best is show how even among friends and colleagues who are comfortable with each other, the topic of religious beliefs can totally drive the conversation into a new, unpredictable direction. What did you think of the main character, Amir?

Alexander: I felt a great deal of sympathy for him, and I saw his story as a very sad one. His actions and choices were far from perfect, but if I were tasked with placing blame for that terrible evening on anyone, it would have to be with Isaac, the hotshot Whitney curator, and Emily, Amir’s wife. Not only are they conducting an illicit affair, but there seems to be something about their aesthetic judgment that’s terribly misguided. It’s an error in sensibilities, totally tangled up with their lax morality.

Amir becomes the unintended and totally unexpected collateral damage. When the curtain rises, Emily is painting “him” but as we learn, she’s not really painting him at all; she’s painting a particular aestheticized idea of him. Her own husband! If there’s a hell for fictional characters, she should go. So … if you were in the chair of judgment, where would you place the blame?

Farmer: That’s not an easy question. I don’t know. I think everyone has a hand. Amir is struggling with his Muslim identity and trying to fit into his Jewish law firm. The question for him is — has he thrown away his Muslim heritage? His wife encourages him to counsel a Muslim man accused of a crime. When he does so, people at his law firm find out about him and it costs him professionally. He seems to hang that over his wife’s head, unfairly.

But what transpires at the dinner table — where you have a Muslim-American, a Jewish man, an African-American woman and a WASPy wife eventually talking religion — seems to be no one’s fault and everyone’s fault. It seems to be people being who they truly are, provoked to say things that should have remained part of their inner voice.

Alexander: I think the blame for his involvement in the case does indeed rest squarely with her. He was resistant to do it for legitimate reasons but caved to her persistent pressure. (And she seemingly wanted him to take on the case because it would fit so nicely with her aestheticized idea of him. For shame!) If Amir has chosen to “throw away” his Muslim heritage, he’s well within his rights. No individual is ever obligated to maintain a religious belief simply because they were born into it.

There’s a grey area because Amir has fibbed a bit about where his parents are from and he neglected to call attention to his Muslim upbringing, but meh: forgivable, considering the current climate. Had he not fibbed, he likely would not be working at a high-powered, high-paying firm, able to afford a beautiful Upper East Side apartment, where his wife has the luxury of living and developing a career as an artist. We learn in the opening scene that nothing sold at her last show, so it’s questionable if she could even be an artist or have a studio if not for him. If I met Emily, I would probably find her very likable, but seeing her moral choices dramatized and dissected that way, I found her sort of awful.

Farmer: Interesting! I liked all the characters and also disliked all of them at times, too. My first thought was, who on earth would want to hang out with such a pretentious, insufferable bunch? But they all had layers. If I have one major issue with the play, it’s the matter of the infidelity you referenced earlier. I found it unnecessary and actually a little cheap. With so much going on, and issues popping out, I thought a romantic affair between two of the characters was a subplot I didn’t need. It felt like a plot device. What about you?

Alexander: I actually found the affair believable — those art fairs! — and an effective part of the plot. If it weren’t for the affair, I think the temperature in the room would have settled down. They’d drink an uncomfortable toast to Emily’s inclusion in the biennial, and then Isaac and Jory would make a hasty and understandable exit. Amir would be left to deal with the fact that he hasn’t been made a partner and that he made an ass of himself at dinner, but it happens and people recover.

He even mentioned earlier that he was pretty much ready to go off on his own and establish his own firm. He would have found his way professionally and the marriage would have likely stayed intact had it not been for the infidelity, which was the final straw in a rough evening and, as a device, made the outcome of the play total, tragic and compelling.

Gosh, I started out by saying I had no interest in debating the show, and here we are! I’m glad that people seem to be connecting to the show and talking about it. But audiences are acting like this is some new discovery, that you leave the theater with something to think and talk about. There’s always something to talk about, even if it’s how awful and excruciating the show was. Maybe this show can be the path through which otherwise resistant people will leave their screens for a minute and start coming back to the theater.

Farmer: Yes, for a show that doesn’t need any debate, here we go! Another question — is this an issue play or one that also works as entertainment? I know the playwright Ayad Akhtar has said in interviews that he wanted to merge the two. Does he?

Alexander: I was entertained. The word “entertainment” often carries with it disparaging implications of something high on spectacle and low on meaning. But I’m with Akhtar on this one. Ideally, a work of art should do both: maintain our interest and engagement, but also bring up interesting ideas. To me, they’re inextricable. I can sit through Cirque du Soleil and enjoy it and all that, but I wouldn’t want to live in a world where that’s all there is. And the idea that art should be some cheerless duty about “issues” is pretty repugnant to me as well. If Akhtar set out to merge the two, in my judgment, he succeeded. It’s actually a pretty modest goal in some ways.

Farmer: I agree. I go to the theater for a lot of reasons. To be entertained, to be moved, to be challenged, to learn. Did this play change my life? No. But it did do a heck of a job of making me think. Some of the scenes and dialogue will stay with me a while and the play does a fine job of showing racism in its subtle — and its unsubtle — forms. I highly recommend seeing it and thinking about it afterwards.

What are some other shows you’d recommend, Andrew? I was a big fan of Wit at Aurora Theatre and Horizon’s The Toxic–Avenger is an immensely entertaining, silly musical that will leave you with a smile on your face. In essence, it’s the anti-Disgraced. I am also looking forward to seeing Atlanta Lyric Theatre’s The Full Monty in a few weeks and Sean Dorsey’s The Missing Generation this weekend.

Alexander: I think the production of Wit is really a reminder of what a beautiful and durable play that is. In my opinion, it will outlast its contemporaries, all the Doubts and Rabbit Holes and Proofs, which were mistakenly overrated. The Aurora is a schlep but they have two strong shows on stage right now; Wit  and Lauren Gunderson’s I and You. I’m totally psyched for True Colors’ American Buffalo. I’ve actually never seen it, but Mamet seems to be a playwright who has worked for a very long time in Akhtar’s vein, combining compelling storytelling with interesting issues that get people talking. People who enjoyed their evening at Disgraced would do well to check it out.