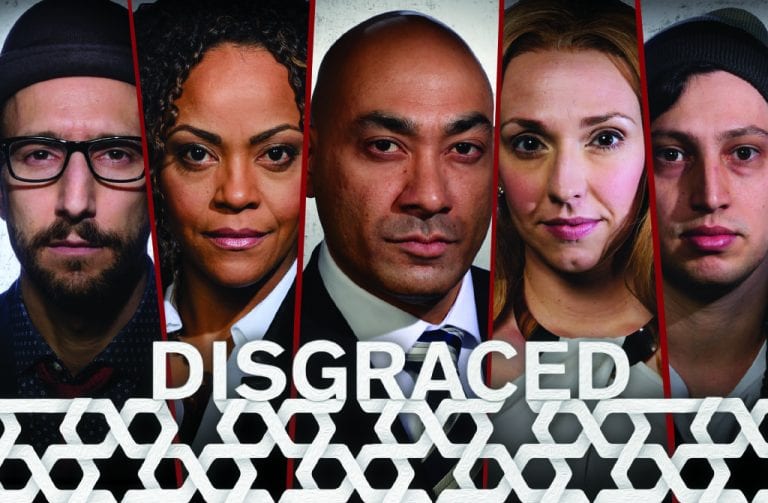 By the time Andrew Ramcharan Guilarte took a bow following his performance in the Alliance Theatre’s first preview performance of Disgraced last week, the leading man was visibly shaken.

The posture was in sharp contrast to his commanding on-stage presence just moments earlier. And gone were any traces of the “enormous, almost swaggering confidence” Susan V. Booth, the Alliance’s artistic director, identified in the actor before casting him as Amir Kapoor.

Before the metaphorical curtain rose on Ayad Akhtar’s Pulitzer Prize-winning play, Andrew Benator — who plays Isaac — wondered aloud what the audience’s response would be to the playwright’s unvarnished look at friendship, identity, marriage, ambition, religion, tribal allegiances and the mentality of marginalized people. No one in the five-person cast had a clue. Would they walk out to face reproach, gratitude or stony silence at the curtain call?

Booth, who admits to being “practically in a fetal position” while watching the drama unfold from her perch in the last row of the theater, was none the wiser, until an electrified house erupted in applause and a standing ovation.

“As soon as you think you understand Atlanta,” laughs a relieved Booth in hindsight, “something will prove you wrong.” [Read ArtsATL’s full review of Disgraced.]

Since its 2012 debut at the American Theater Company in Chicago — where one critic likened Disgraced to “a howl of passionate rage” — the 90 minutes of uninterrupted, whip-smart dialogue has provoked laughter, horror, delight, shock, disgust and suspense. Characterized as everything from pro-Jihadist to anti-Islamic, the work has even undermined the bond between close friends who could not reconcile their disparate responses to the same material.

These primal responses came as a surprise to the playwright. “The tragedy of the play,” says Akhtar, “is a man who comes to experience the groundlessness on which he has built his whole identity.”

Disgraced tells the story of Amir Kapoor, a corporate lawyer on the fast track to partnership at a boutique law firm in Manhattan. A first generation Pakistani-American, Amir’s Muslim faith is a liability for him professionally and an anathema to him personally.

Amir and his wife Emily, a beautiful blonde artist, are a quintessential power couple living the dream in Gotham. But the dream devolves into a nightmare when the Kapoors host their friends Jory and Isaac, a biracial couple, for dinner one night. After Amir has too much to drink, the topic turns to religion, prejudices are revealed, secrets are spilled and skeletons leap from the closet in spectacular fashion.

Recognizing the temptation to reduce Amir to a stereotype (against the backdrop of post 9/11 Islamophobia), Booth was determined to encourage informed, thoughtful engagement around a play that does not tread lightly on the third rail of politics and religion.

“You can’t take on material that has the capacity to provoke in a vacuum.” she stresses in a phone interview. Instead, “you’d better be working with Muslim scholars and consulting Islamic leaders and thinkers. And you’d better be listening… a lot.”

One of the first people Booth listened to was Suehyla El-Attar, an Atlanta-based actor, writer, director and dramaturge. Never one to mince her words, El-Attar did not disappoint.

“I hated the script and was angry at the playwright,” she explains between rehearsals at the Alliance. “I thought it was anti-Muslim … and felt it gave people permission to say ‘We have a right to our fears and are justified in our biases against these people.’”

El-Attar accepted the opportunity to serve as assistant director for the production, which, she recalls, “changed my entire experience with the script.”

Her enhanced understanding of the play, willingness to engage the edgy themes and openness to the possibility of evolution are all qualities the Alliance hopes can be replicated through a series of educational programs and conversations that are being played out on multiple platforms around Atlanta.

The initiative kicked off when Booth invited Akhtar to talk about Disgraced and take questions from the near-capacity audience in anticipation of the show’s February 3 opening.

Born and raised in Wisconsin by immigrant Pakistani parents, both of whom are doctors, Akhtar was a charming combination of professorial and perpetually chill best friend with a penchant for striped, hipster socks. Erudite, funny, humble, thoughtful and candid, his fluency as a speaker was paralleled by his consideration as a listener.

A novelist, actor and screenwriter, Akhtar revealed himself to be the kind of storyteller who is far more interested in truth than fiction. Recounting the time a group of eight Pakistani women scowled at him from the audience during a tour for his book American Dervish, he explained how one of them subsequently stated that she and her friends were determined not to raise a child who might turn out like him.

He was also forthcoming about the conundrum of being raised by smart, educated, accomplished, strong women who tacitly encouraged him to be like the abusive, domineering, sexist men they were married to and resented.

AfterWords, a post-show discussion with the cast and community leaders will follow almost every performance of Disgraced. And Play Club: Disgraced, a four-session discussion group (facilitated by El-Attar), invites participants to analyze the text, wrestle with its themes, attend a performance and debrief afterwards.

“You’re not always going to have a Pakistani Muslim, a Jewish man, an African-American woman or a white woman in your dinner party,” explains El-Attar. “Nor are you likely to be in the company of artists, curators and attorneys at the same time when socializing.”

But when people are given permission to have unfiltered, cross-cultural conversations that explore issues and topics which are typically verboten in polite company, the discomfort that results can be a catalyst for deeper conversation.

And how does El-Attar feel now that Disgraced has opened?

Resolute as ever, the former player-hater raves, “I can’t wait for everybody to see it!”