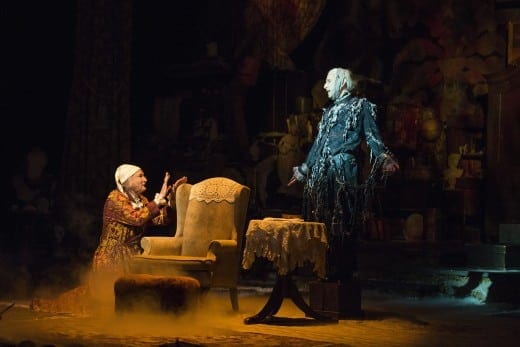 David De Vries, in his debut as Scrooge, confronts the ghost of Jacob Marley (Andrew Benator).

Review: Alliance Theatre’s “A Christmas Carol” a sumptuous spectacle but a bit stale

It’s hardly a stretch to call the Alliance Theatre’s A Christmas Carol the Big Kahuna of holiday shows. Few if any local productions have its legs, its excesses or its certified crowd-pleasing nature. Yet the 25th anniversary production, running through December 24, is starting to show some wear.

Rosemary Newcott, who has directed all but one season of Carol, has brought together an all-local cast, many of them long-term. The big exception is that David de Vries has assumed the role of Scrooge, which Chris Kayser played for 16 years — with mixed results.

Carol remains a spectacle of a show, very theatrical and larger than life. The set by D. Martyn Bookwalter is beautiful and expansive, and the special effects are impressive, with lots of fog and grand character entrances. The singing is sweet and there are cute kids in abundance. The costumes by Mariann Verheyen and lighting by Diane Ferry Williams are first class.

David H. Bell’s version of the classic story can almost be as much musical revue as it is the tale of cranky Ebenezer Scrooge and how he learns to appreciate the holidays and others, thanks to visits from specters of the past, present and future. The action will, on occasion, simply stop as the ensemble comes out and tears into a holiday staple. At times, it is overkill. Despite Newcott’s competent staging, many scenes just go over forever, overshadowing the narrative. A leaner approach could benefit the production.

Bart Hansard is his usual delight as the Ghost of Christmas Present and Fezziwig, while Elizabeth Diane Wells is a lovely Ghost of Christmas Past. The likes of Joe Knezevich, Neal Ghant and Andrew Benator round out the large cast, with Jaden Robinson playing Tiny Tim and Je Nie Fleming stealing scenes as Mrs. Dilber. Fleming and Laurie Williamson (as Bess and an ensemble member) prove the vocal standouts here. De Vries is certainly a capable performer — he has been on Broadway in Beauty and the Beast and acted all over Atlanta — and his take is respectable. What he doesn’t bring is the emotional arc of Scrooge or the nuances that Kayser built over the years.

It’s perhaps unfair to compare actors, especially one who is filling the shoes of someone who has publicly owned a character for more than a decade. Yet there is no denying that Kayser’s lived-in performance was the main reason A Christmas Carol worked. His honesty and transformation made everything around him bearable. Without him at the center, all the overblown aspects of the production really stand out.

For tradition-loving audience members, the fact that the Alliance’s A Christmas Carol is pretty much the same production every year is probably a plus. Adventuresome theatergoers, however, might consider that a bore. The best long-running productions make needed tweaks and updates. Sadly, even with a new Scrooge, this Carol feels a Xerox version of what it was a decade ago.