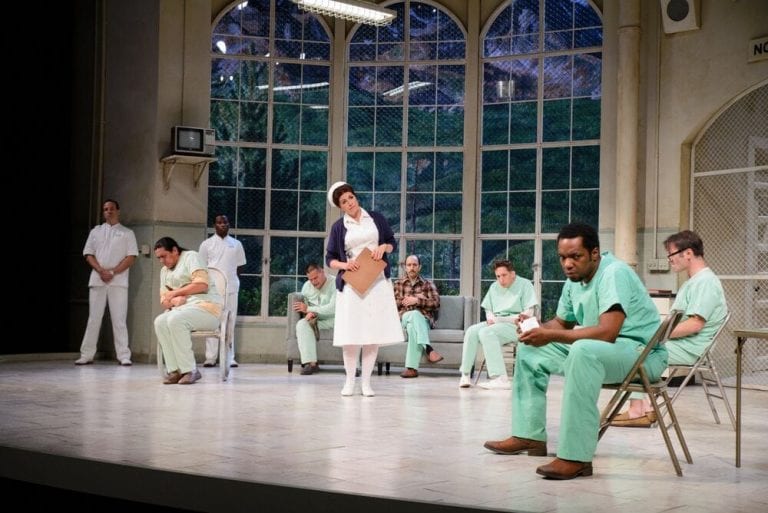 Tess Malis Kincaid (center) and Neal Ghant in the Alliance Theatre's 2015 production of "One Flew Over The Cuckoo's Nest." (Photo by Greg Mooney)

Review: Alliance flies over the cuckoo’s nest with some of Atlanta’s most beloved actors

Ken Kesey’s 1962 novel One Flew Over the Cuckoo’s Nest became a play long before it became a movie. The first Broadway production dramatizing Kesey’s story about the nightmarish conditions in an Oregon psychiatric hospital starred Kirk Douglas and opened in 1963, a full 12 years before Jack Nicholson famously played the lead role in the unforgettable 1975 film. For decades, the iconic movie overshadowed the earlier play. Who would want to produce a play that’s now a movie that everyone knows and loves?

In recent years, however, things have changed, and it’s no longer perceived as a liability if an audience is familiar with a story through the movies before entering the theater. It’s now seen as a way to lure contemporary audiences back to the playhouse, and almost every Broadway show nowadays has some kind of relationship to the movies.

In 2001, Steppenwolf Theatre Company successfully produced a Broadway version of One Flew Over the Cuckoo’s Nest, winning the Tony Award for Best Play Revival, with regional productions popping up ever since. The Alliance Theatre has stepped on board with a competent and likeable mainstage production that stars some of Atlanta’s most talented and beloved actors. The show runs through September 20.

What works well in the movie works well in the play, directed by the Alliance’s artistic director Susan Booth. It’s a gripping story of the head-to-head battle between Randle McMurphy (Neal A. Ghant), who cons his way into a six-month stint in a psychiatric ward thinking it will be an easy ride compared to the alternative of prison, and the domineering Nurse Ratched (Tess Malis Kincaid) who rules the ward with an iron fist wrapped in a perfectly-starched white glove.

Ghant creates the right mix of charm, confidence, rebellion, sensitivity and stubbornness that define the central character. Casting an African-American actor in the lead gives the story an interesting edge, as issues related to race, incarceration and control have lately come to the forefront of contemporary awareness.

Kincaid as Ratched strikes a nice balance in her portrayal. Ratched’s desire for order is seen as understandable, even sympathetic, even though her methods are ultimately horrifying.

Designer Todd Rosenthal’s enormous psych ward set — with its brutally institutional central room, large windows and long hallway — is a thing of beauty, and the ward is populated with an odd assortment of inmates and staff, giving the all-star ensemble plenty to chomp into in various supporting roles.

The stage business often gets too loud, crowded and busy (forgivable, I suppose, since it’s supposed to be a psych ward), and the supporting performances can often seem too mannered and actorly.

The play differs from the movie in that, like the book, it’s narrated by the character Chief (Jeremy Proulx). His surreal interscene monologues about the world’s outcasts and misfits being reworked in a nightmarish factory are among the most compelling segments of the show, but there are too many of them.

The movie ends without dialogue, which is an improvement over the talky ending of the play, which mistakenly has another character enter so Chief can chat about leaving before he does it. One of the biggest surprises of the evening for me was the fact that Chief doesn’t throw the heavy apparatus through the window at the end of the play as the character famously does in the movie; instead, the window is opened with a dreary old key.

There are dated elements to the story. Mental illness is occasionally played up for laughs. The central conceit — a group of wounded, victimized, but basically decent men are dominated and controlled by a villainous, castrating, antagonistic woman who acts as a stand-in for all things conformist, bureaucratic and authoritarian — has an old-school, 1960s “alpha-male” misogynistic edge. And the field of psychiatry has changed so much that the story no longer has the same sort of newsy immediacy and shocking relevance that it must have had when it opened.

Still, like the movie, the play One Flew Over the Cuckoo’s Nest is at heart a moving retelling of the age-old story of the individual taking a quixotic stand against authority. It may not be a show that’s filled with new revelations and innovations at every turn, but Atlanta audiences should enjoy the way the Alliance brings the familiar story to life on stage as live theater.