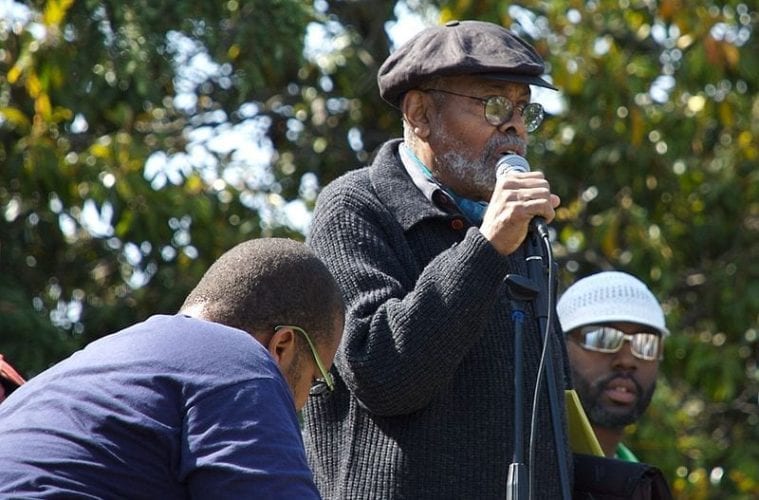 In mostly white classrooms at many universities, Amiri Baraka’s poems are assigned in brief, dramatic portions. This, at least, was my experience. A student might read “Black Art,” a poem that agitates easy classroom conversations about what a poem can say, want and do with its vivid amplification of a black united front in the wake of the assassinations of Dr. Martin Luther King, Jr. and Malcolm X. The poems in Baraka’s first collection, Preface to a Twenty Volume Suicide Note (1961), present a teachable narrative of dissatisfaction and resistance to the white hegemony of the American poetry scene, whether Beat, Black Mountain, Bay Area or New York School. A teacher might explain that Baraka left his white, Jewish wife and moved to Harlem in 1965, abandoning the name LeRoi Jones and organizing the Black Arts Repertory Theatre School. The conversation might end by mentioning that Baraka’s term as Poet Laureate of New Jersey was cut short after his poem about 9/11, “Somebody Blew Up America,” was accused of being anti-Semitic. For the most part, these are the institutionally sanctioned touchstones of Baraka’s influence on American poetry.

This bookending of Baraka’s life stands as stark evidence of what Ishmael Reed calls Baraka’s “literary mummification in 1965.” If not intentionally reduced for inclusion on a syllabus, approaching Baraka’s work in this way still undercuts his seminal achievements as a writer, scholar and activist. At its worst, this abridged narrative casts the perceived “anger” in his poems as a trope for the Black Arts and Black Power movements as a whole, allowing vague, irresponsible portrayals of black nationalist, Pan-African and other neocolonial politics and aesthetics to persist. The posthumous collection of Amiri Baraka’s poetry, SOS: Poems 1961-2013, shows how much necessary movement his poems generate beyond the classroom narratives that cite him. As Baraka writes in “In the Tradition,” a long poem published in 1982, “cancel on the english depts this is america,” and SOS embodies what that refusal can mean.

In his review of SOS in The New York Times, Dwight Garner claims that Baraka’s lifelong resistance to hegemony within the academy and without stakes him as “the keeper of a certain vinegary portion of the African-American imagination.” It is difficult not to hear the sarcastic derision in Garner’s description, and poet Harmony Holiday rightly takes Garner to task in the Chicago Review for his “tacit effort to undermine [Baraka’s] work and message by way of too much hype and emphasis on his politics.” Garner forgoes any mention of the title poem, SOS, that opens the book and, as Holiday notes, “fails to take into account the intensity of Baraka’s commitment to this love call.”

Wherever you are, calling you, urgent, come in

Black people, come in, wherever you are, urgent, calling

you, calling all black people

As SOS bears out, love is the song throughout Baraka’s life — a love that is fiercely textured and urgent. His poems announce and fight for a vision of tenderness and grace, but never without acknowledging the brutal presence of the forces that exist to prohibit them, the “English Department Skull & Crossbone / New Critic Klansman,” as he lists them in “Sin Soars!” Such uncompromising pairings are a hallmark throughout Baraka’s work as he refuses the violent mediocrity of mainstream aesthetics by naming their ideological underside, calling out their complicity. Lines that associate university academic departments with secret societies might seem hyperbolic, but such a reading falls into the trap that literary pundits have made throughout Baraka’s life and after. As in “Somebody Blew Up America” where Baraka begins by naming and undoing post-9/11 jingoist rhetoric, these alignments are a way of preempting the knee-jerk American response of othering an outside enemy. This enemy is both internal, embodied throughout Baraka’s work in his own search for self – “I wanted to know / myself, and found that was a lifetime’s work” – and amplified in the larger culture’s belligerent inability to change a world in which “Murder / is speaking of us.” 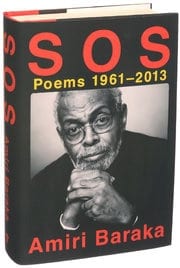 “I think about a time when I will be relaxed,” the speaker posits in “Three Modes of History and Culture” from Baraka’s 1969 collection Black Magic, acknowledging the endless microaggressions of policed black life in America, what poet LaTasha N. Nevada Diggs has called “chronic whiplash.” But how does such a peaceful moment come when, as Baraka writes in “Das Kapital,” “everywhere / is the death scene”? The impossibility of this tranquil lyric aesthetic in Baraka’s work is not a loss, but an imperative denial of poetry that accepts “a bibliography / of bitter neocapitalists or bohemian / greys” and “money, the articulate stuffing” as markers of success. Baraka’s work was never only literary as his lifelong work as an activist against systemic oppressions of all kinds, in the service of all people, attests to. Locally, Baraka’s organization of the first meeting of the Congress of Afrikan People in Atlanta in 1970, at which he read his call to collective action “It’s Nation Time,” marks an important moment in his career and the organization of black nationalist and Pan-African movements nationally. “I cant say who I am / unless you agree I’m real,” Baraka attests in “Numbers, Letters,” echoing the denial of black life and citizenship that Black Lives Matter continues to protest against.

As Holiday reminds us, what’s in SOS is poetry, not politics, though the two are never severed. A master of the oratorical litany and the intricate, urgent music of critical thought, Baraka writes poems where “my blue insides spread like a thin glowing song all in front of me,” a life-affirming contamination of the status quo with another possible world, another possible sound. When I recently taught Baraka’s incredible poem “Dope,” a poem unfortunately not collected in SOS, at an Atlanta-area college, the students rightfully linked the work to Kendrick Lamar and Black Lives Matter, identifying the urgency, humor and freshness that animate all of Baraka’s work. Such poems are not, as Garner calls them in the Times, “tantrums” marred by “deficiencies of coherence,” but a kind of ecstatic, visceral, resolute music meant to live inside us and change us, to knock loose our reliance on the oppressive systems that are killing us all: “Live, you crazy mother / fucker! / Live! / & organize / yr shit / as rightly / burning!”

As poet Ted Berrigan, born in 1934 ( the same year as Baraka) says in an introduction to a reading of Baraka’s in the ’70s, “Amiri Baraka’s reality has often been my nightmares…The works that he performs, that he reads, that he writes now raise questions and those questions exist in my head all the time. The answers that he gives, when he does give answers, are not always my answers, but they always are formidable and always have to be dealt with.” This, at the very least, is how we might begin to read SOS, not by policing the narratives of his work and life or bemoaning the irreducibility of his poems to easily sharable soundbites, but acting together with Baraka’s poems, and without the comfort of consensus, to confront the love and pain they describe. Whether in a classroom, local library, with friends, or on one’s own, reading and talking about SOS in its completeness is, now more than two years after Baraka’s death, a necessary beginning. Along with Baraka’s poems, we might become “strong from years of fantasy / and study.” Living in that critical intersection is the chance for love that Baraka’s poems repeat and sing as “we go into the future / carrying a world / of blackness.”