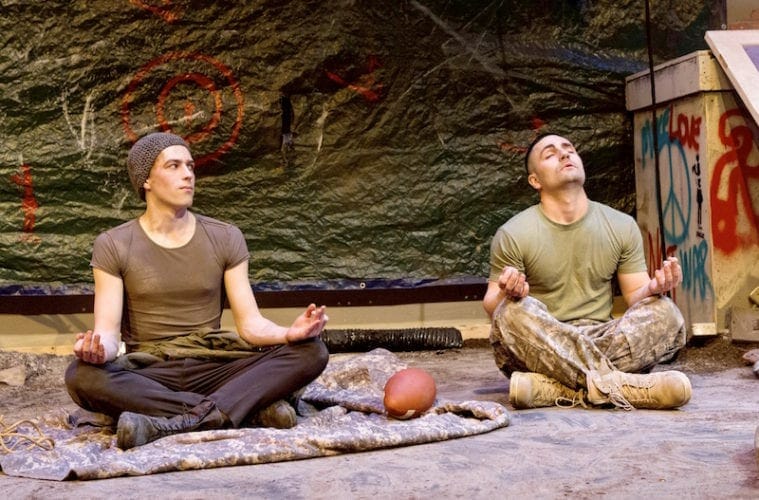 Note: Out Front Theatre’s staging of “warplay” opened and closed last weekend due to coronavirus concerns. As a publication of record, and out of respect for all the artists involved in bringing “warplay” to life, we decided to publish our review anyhow. A video of this “warplay” is available for $20 via the Out Front website or this link.

Though the set looks cool and the performers are committed, young and beautiful, Out Front Theatre’s warplay has a giant Achilles’ heel that wounds its overall impact. JC Lee’s script, attempting depth and resonance about masculinity, is meandering nonsense.

The great Samuel Beckett deserves some of the blame. Ever since Beckett’s characters waited for Godot, playwrights have tried to copy that formula. But no one does Beckett like Beckett, and audiences would be better served if playwrights stopped stranding two actors in the middle of a wasteland to talk at each other about seemingly nothing. Andy Stanesic (left) plays a sensitive character named “P.” Gregory Piccirilli’s “A” character is much more the warrior. “Warplay” opened and closed last weekend at Out Front Theatre due to coronavirus concerns. The performance can now be seen on video for $20.

In warplay, the two characters — A and P, not to be confused with the grocery-store chain — wait in a bombed-out backyard playground to debate whether they want to return to the warfront. The two have been in love since childhood. A sees himself as a great warrior, blessed since birth to be shining and important. P, lithe and delicate, uninterested in games, has been charged with distracting A.

These distractions take the form of flirtation and intimacy, play-fighting in underwear, kisses and embraces. This staging, directed by Justin Kalin, amps up the sex appeal where it can, possibly because there’s little in the text to contribute to the story.

The characters talk a lot, repeatedly, about who they are and what their destinies involve. The story jumps back and forth in time. Sometimes, they’re children. Most of the time, they’re adults, camping out, hiding and killing rabbits. It all happens in a nonlinear way, so we’re never quite sure where we are in the timeline until scenes progress. The dialogue is poetic and abstract, so it’s hard to gauge its cause-and-effect logic.

The drama is a modern take on the myth of Achilles and Patroclus. Achilles was an invincible warrior in the Trojan War, blessed by the gods to be strong, and dipped in the River Styx by his mother so that he’d be invincible. Patroclus, in Homer’s Iliad, is Achilles’ closest comrade. The exact nature of their love has been debated through the ages.

Warplay, though, is interested in tampering with destiny. It questions whether wars must always play out the same way. The characters wonder if they can change their fates. And, every now and then, some modern touch comes along to make the whole thing seem silly. At multiple points, the characters sing Styx’s “Come Sail Away” to mourn their lot in life. They also sing the song because it’s Styx, like the river in the myth, get it? Get it?? The play really wants you to know how clever it is. And it’s not. Actors Gregory Piccirilli and Andy Stanesic do what they can with it. The early scenes, which contain more humor, work better than the climax because, at the beginning, the audience wants these characters to be real, grounded people. Stanesic is legit funny as P, and Piccirilli is charming and sexy as a hardbodied, swaggering military man.

When it becomes clear that these two won’t be grounded in reality — which happens early — the play deflates.

As A, Piccirilli’s physique pulls focus from some monologues because he isn’t playing a person. He’s playing Achilles in a commercial for Calvin Klein’s Obsession. It’s watchable, certainly, but the message is vague.

By default, Stanesic’s P is more human and sympathetic, more fluid about how to express gender and intimacy. But even P is given abstract lines. And when the script reaches its climax, when the characters face their fate, what should be tragic just feels odd. The performers’ chemistry is solid — they deserve a better play.

While Out Front Theatre’s style is on point, warplay, sadly, lacks substance.

In times like these when we are separated by necessity, ArtsATL is more needed than ever. Please consider a donation so we can continue to highlight Atlanta’s creative community during this unprecedented period.