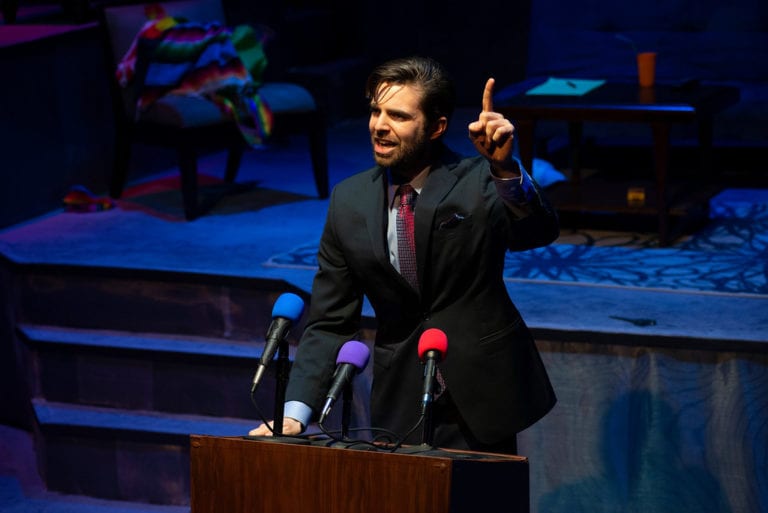 When it debuted in 2013, Barack Obama was in his second term as president, and the more moderate and liberal among us felt a certain optimism. “After Trump” is the setting for the revised version, running through April 14 at 7 Stages in Little Five Points. It’s decidedly darker, still hilariously funny, and you need no knowledge of the first to appreciate the second.

Angry Fags is a revenge story and a cautionary tale of good gay guys gone bad. We’re speaking primarily of steady-until-he’s-not Bennett (Gregory Hernandez), who works in politics, and his best friend, Cooper (Cody Russell), who works at being witty and fashionable. When one avenges a friend’s gay bashing, it sets in motion a string of events that cannot be undone.

“Change doesn’t come from reason,” one tells the other. “It comes from fear.”

Each character has an agenda, each of which clicks against the others like bullets in the chamber of a gun. In this make-believe game of Russian roulette, we wonder when — and at whom — the weapon will fire. Have no doubt, carnage will be committed. These agendas will be flayed open and examined as they, like their owners, collide, cozy up, ally and split apart.

Payne’s script — 30 minutes trimmer than in 2013 — is still too long, clocking in at 2.5 mostly edge-of-your-seat hours. He softens the blows with his wickedly fine talent for one-liners, yet there’s a heaviness in the room. His laugh lines are balloons weighted to earth like sandbags; that’s the yin and yang, the push and pull of Angry Fags.

The cast, employed by director Kate Donadio MacQueen and codirector Ibi Owolabi, brushes up against brilliance. Partrick, as a politico with higher aspirations, and Criss, as a woman who spends more time at work than at home, do some of their best work to date. Cook makes the most of a smallish role, using an arched eyebrow or feigned smile to punctuate her points. Prerecorded video of the TV newswoman and political opponents is less effective, proving too dim against the walls of the set.

Sarter is particularly fine as the GOP poster child. Her Peggy Musgrove is a smooth talker with a knack for sincerity. She’s churchgoing and God-fearing, yes, but not above turning tragedy to her political advantage. Keep an eye on Sarter. Her notable work in the past few years includes the recent An Octoroon (Actor’s Express), that company’s 2018 staging of Angels in America and Danai Gurira’s magical Eclipsed at Synchronicity Theatre in 2017.

What to say about Hernandez’s Bennett and Russell’s Cooper? Be careful when picking your friends?

Hernandez makes Bennett likable and capable, a guy who’s sensitive, sensible and goodhearted. We can trust him, right? Right? In other hands, Bennett could be boring. Hernandez is anything but.

Russell’s Cooper, well, wow. He could seem stereotypical if his passions didn’t run so deep and his blood didn’t run so cold. Coop comes off as a shrill lightweight at first, but as the story unfolds, he’s the one tightening the screws. Payne’s morality tale wouldn’t work if Russell couldn’t deliver the tragedy as well as the levity.

“The beauty of this show,” MacQueen writes in her program notes, “is the creation of thoughtful, compassionate, funny and friendly characters who, through a sense of helplessness and fear, become the very thing they are fighting against.”

The 2019 version of Angry Fags is very much a play of, by and for our time. And the ending will kick you in the teeth.