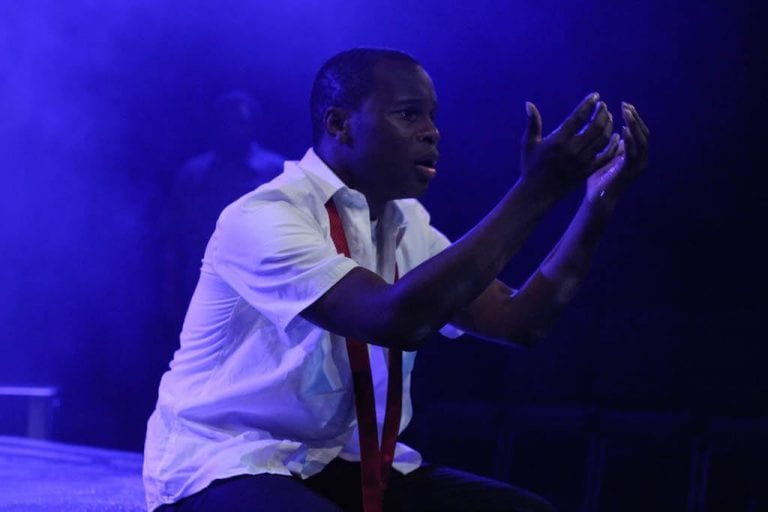 Terry Guest in the title role of Marcus. (Photos by BreeAnne Clowdus)

Review: Actor’s Express scores big with winning coming-out story of “Marcus; or the Secret of Sweet”

Marcus has a secret, or rather he thinks he does. Nearly everyone around him has begun to suspect that he’s gay, or “sweet” in the vernacular of the small-town, Louisiana bayou, African American town where he lives, though he remains almost inexplicably secretive and tight-lipped about it.

Marcus is having mysterious dreams, ones that seem related to his difference from other people and to the death of the father he barely knew.

What’s most intriguing about award-winning playwright Tarell Alvin McCraney’s play Marcus; or the Secret of Sweet, currently at Actor’s Express through April 26, is the way in which McCraney is able to depict how Marcus’ seemingly interior, solitary, contemporary struggle actually has tendrils that touch and effect an entire community, tendrils that extend into the immediate and even into the distant past.

The show gets off to a slow start. It begins with a monologue from a dream, then a gospel song and a funeral procession. For a few moments, I thought things might never recover. But they certainly do, especially as the play narrows in on Marcus (Terry Guest) and his relationship with his best friends Osha (Falashay Pearson) and Shaunta (Ashley Tate).

The characters are all beautifully played by young actors who, as with McCraney’s Choir Boy, are pretty much tasked with carrying the show. Marcus has an excellent cast all around. Like Faulkner’s Yoknapatawpha County, McCraney’s world is densely and fascinatingly populated (viewers familiar with McCraney’s other work such as In the Red and Brown Water, which had its world premiere at the Alliance in 2008, may recognize characters and settings that appear in both works).

There’s some interesting doubling in the casting, with some actors taking on more than one role. I especially admired Tiffany Denise Mitchenor as two very different mothers.

Marcus shares a lot of the lyrical and metaphorical qualities of Choir Boy, but it also feels grounded in a more recognizable and tangible social reality. The invented, all-male black prep school of Choir Boy was an interesting place, but ultimately it existed as an invention for the play. The atmospheric, history-haunted, communal South Louisiana bayou town of Marcus is simultaneously dreamlike and identifiably actual.

Designer Kat Conley’s set is fittingly dreamlike — abstract black-and-white outlines of barren swamp trees silhouetted against the sky and also painted on the floor, as if reflected in water — though a small, very real pool of water toward the front of the stage makes crossing the area awkward (some audience members have to walk by it to get to their seats, so watch your step). Strangely, after all that, the little pool is barely used or even referenced during the show.

It can be difficult for audience members to connect to new characters, to dwell so long on the significance of sexual identity, and especially to feel the weight and significance of long-standing secrets. But even those who don’t like the play would have to admit that McCraney is approaching new subject matter in an original way, and this is no small feat.

In the end, the show’s sharp writing, its atmospheric setting, the fine cast and the playwright’s ability to dramatize the way in which an interior struggle connects to a larger world make for a moving performance.