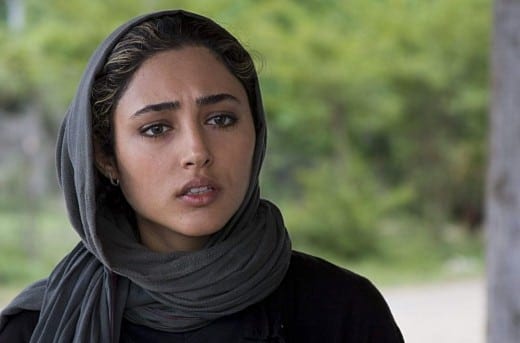 Sepidah (played by Golshifteh Farahani ) is the group’s ringleader.

Though she’s invited to join a half dozen longtime friends — two married couples with kids in tow and two adult siblings — for a weekend at the beach, the woman who lends her name to About Elly doesn’t really know these old college classmates. She’s been asked along at the last minute by Sepideh (Golshifteh Farahani), whose young daughter Elly (Taraneh Alidoosti) teaches. And that’s about all any of the others know about her — except that she’s young and single. And so is Ahmad (Shahab Hosseini), recently divorced from a German wife.

When they arrive at the beach, Sepideh schemes to get an upgrade on their villa by telling the landlady — out of earshot of both Ahmad and Elly — that the two are newlyweds. It’s the first of many white lies, but one that everyone hopes might soon come true. Everyone but Elly, that is, who hasn’t been consulted about being placed on the marital auction block.

Made in 2009, before his Oscar-winning A Separation and his subsequent film The Past, this commanding drama from writer-director Asghar Farhadi may not be as strong as the first but it’s probably a notch above the second. All three of his films that have made it stateside show that he’s a master at delineating the lives of middle-class Iranians as they both stretch against and unwittingly conform to their country’s gender roles and restrictions.

Everyone is perfectly nice to Elly, and that’s the problem. She has her own life, one her new acquaintances haven’t bothered to learn anything about. When, after the first night, she tries to leave and take a bus back home to the city, she finds herself imprisoned by a smiling conspiracy of the other women, who hide her keys and send her out to the beach to oversee the children.

Then, something happens — a couple of things actually. First, a near-drowning; next, a disappearance. Here, the movie recalls Peter Weir’s Picnic at Hanging Rock and, especially, Michelangelo Antonioni’s L’Avventura. While The Separation and The Past consisted largely of people talking to each other indoors, Farhadi here proves skilled at ratcheting up tension and physical scenes of panic as the vacationing friends race along the sand and plunge into the surf in panic.

That’s the halfway point of the movie. The second hour unfolds as the old friends and spouses unravel, lobbing recriminations at one another and trying to figure out what has happened and what to do. And who, exactly, Elly is — or was.

The movie’s last act veers toward a dark sort of farce, as a man none of the vacationers even knew existed comes to the seashore in search of Elly. They scramble to remember what half-truths and fabrications have been told. Throughout, the movie has currents of pitch-black humor. One man blames his wife for upsetting him enough to make him beat her. One of the women, reminded that she helped perpetuate the fiction that Elly and Ahmad were newlyweds, says with embarrassment, “Did I ululate? That was in fun!”

But the ultimate mood of the film is one of melancholy. By the end, we’ve seen just the sort of married, male-female dynamics that Elly, perhaps justifiably, would rather avoid. Though everyone, to some degree, has mishandled or omitted certain facts, as in A Separation, there is no clear wrongdoer. For the most part, everyone behaves with what he or she believes is the best intentions.