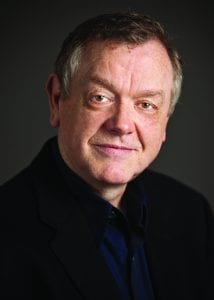 With disarming gentleness, Jim Grimsley’s new memoir conveys a harsh message sure to unsettle the well-mannered, well-meaning, white Southerner: You likely are a racist in spite of yourself.

In How I Shed My Skin: Unlearning the Racist Lessons of a Southern Childhood (Algonquin Books), Grimsley explores with unflinching, plainspoken honesty the formative conventions of his upbringing that made him a “good, little racist.”

He was 11 years old in 1966 when he encountered African-American peers up close for the first time, in the tobacco country of tiny Pollocksville, North Carolina. The county had grudgingly adopted a “Freedom of Choice” desegregation plan, which allowed a few courageous black students to enroll in his formerly whites-only school; shortly thereafter, the federal courts mandated full desegregation. So Grimsley and his classmates became unwitting players on the stage of social change, where they were often clumsy but occasionally graceful in their movements.

“White people declared that the South would rise again. Black people raised one fist and chanted for black power,” he writes. “Somehow we negotiated a space between those poles and learned to sit in classrooms together. … Lawyers, judges, adults declared that the days of separate schools were over, but we were the ones who took the next step. History gave us a piece of itself. We made of it what we could.”

That process, of course, had its wrenching moments. The opening chapter of the book is titled “Freedom of Choice/Black Bitch,” invoking the insult Grimsley hurled at one of his new classmates on the first day of school.

“I knew that calling Violet a name would make the boys in the back of the room laugh,” he writes. “That moment inside my head rings down through the years so clearly. I was 11 years old, filled with a vague sense of purpose, and ready to do my part, though for what, I could not have said.” Without blinking, she shot back, “You white cracker bitch,” and, to his blushing consternation, raised an eyebrow and added, “Black is beautiful.”

So began a chastened boy’s mission of questioning everything he had ever been taught.

“I was this smart-ass kid, and she quickly put me in my place,” Grimsley says. “Those (African-American) kids were so heroic and self-possessed. They were remarkably strong for kids of that age. It was a revelation.”

Grimsley, an Emory University professor, has penned one book of short stories, one book of plays, and nine novels, including the acclaimed Winter Birds, published in 1994. He initially tried to render his experiences during the civil rights era as a novel, but decided fiction was the wrong medium. So he began to mine his memory in granular detail.

“This was the hardest book I’ve written,” he says of Shedding My Skin. “It took me years to articulate these feelings, and I reasoned that if I’ve had that struggle, others have, too.

“The most painful chapter was the one that dealt with the word ‘nigger’ and the litany of its uses, including jokes and, particularly, nursery rhymes, in which 4- and 5-year-old kids could casually dehumanize people. The really hard part was viewing myself as a racist, but it was true and necessary. The confession was liberating.”

His meditations on that wounding, blood-soaked epithet make for some of the most nuanced passages. He parses how the word “nigger” was classified not so much as vile hate-speak but as a signal of something infinitely more benign but still relatively taboo in the genteel South: coarse manners, akin to cussing or “acting ugly.” He recalls a conversation with his mother:
“It’s not a nice word,” my mother answered. “Nice people don’t say it.”
“Why not?”
“Because it’s not polite.”

Instead, his mother urged him to use “niggra.” “It was kind of a compromise,” he notes wryly.

In an echo of Hannah Arendt’s famous “banality of evil” line, Grimsley shows the prosaic, workaday dynamics of racism on an intimate scale, recalling the messages he received from magazines, music and television shows, along with the universal rites of adolescence such as his first kiss — a startling but pleasing peck from an African-American girl.

“When we talk about racism, we tend to emphasize the brutality of it,” he says. “If you haven’t participated in a beating, rape or a lynching, you may think you’re okay, but that’s not necessarily the case. Good, white people practice racism and teach it, handing it down, often without meaning to. Racism is so stubbornly embedded, even in good, white people, that it comes out in ways you don’t expect.”

In fact, the original working title for this memoir was Good White People. As a result of this tack, the book is distinguished by a refreshing subtlety, devoid of certain tropes typically found in literature about the South. Grimsley’s family was too poor to afford servants, so his epiphanies did not derive from a sassy, harrumphing black maid, nor did he tangle with easy-to-identify villains such as adder-eyed Klansmen. Instead, racism worked, in his circumscribed world, by way of an insidious osmosis; there was presumed white solidarity everywhere, in the hastily established private schools for white children; the hushed conversations and knowing looks exchanged by adults; and, sadly, in the sermons expounded from the pulpit and elaborated upon by salt-of-the-earth neighbors.

“I was taught to believe in white superiority in small ways, by gentle people, who believed themselves to be sharing God’s own truth,” he writes. 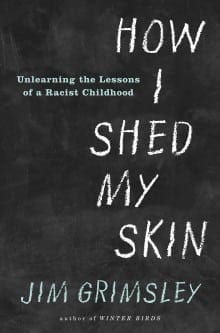 Grimsley, though, was forging tentative alliances with the new kids, who helped him, gradually, bit by bit, challenge those assumptions and recognize their humanity. It probably helped that he was finding himself secretly in a minority role of his own; he was realizing that he was gay. He reasons that he probably would have experienced more bullying as a “sissy” if the other white students had not been so distracted by integration. At the 40-year reunion of the class of 1973, he was one of only a couple of white alumni who showed up.

Can he go home again?

“Reaction to the book so far has been overwhelmingly positive, especially from the black students from that era,” he says, noting that he participated in an NPR interview with one of his African-American schoolmates. “Nobody has told me that I got anything wrong, though I haven’t really sought out the older, white folks in Jones County for their opinions.”

Has he completely shed his troublesome skin? Again, Grimsley opens up matter-of-factly: “I think the programming is still there in my software, in the underground of my thinking, and I’ll tell you why,” he says. “I always mark interracial couples, in the sense that I notice them, and I wonder about them — how they got together, what issues they face, how well they get along. I think if I had completely exorcised the demon of racism, if I had made my peace entirely, I wouldn’t notice them.”

In any case, he is not alone. He believes the Obama years have acted as a sort of pus-drawing salve, exposing racism on both the right and the left.

“Even progressives have turned on the president, and I think there’s some subtle racism at work there,” he says. “The past couple of years have been especially scary, ever since the death of Trayvon Martin. There’s a new coded language. The word ‘thug’ is interchangeable with ‘nigger,’ I think.”

To counteract these forces, Grimsley prescribes rigorous self-evaluation for his readers. “All people have a certain amount of bias when dealing with people who are different from them, but racism requires a majority, backed up by a power system,” he says. “It takes real work to uproot it. You really have to look hard in the mirror and question yourself. And if you’re white, you probably have something there to work on.”