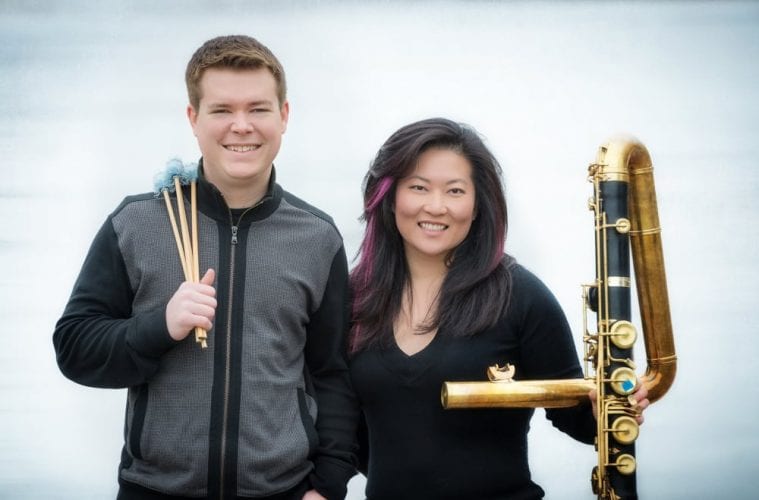 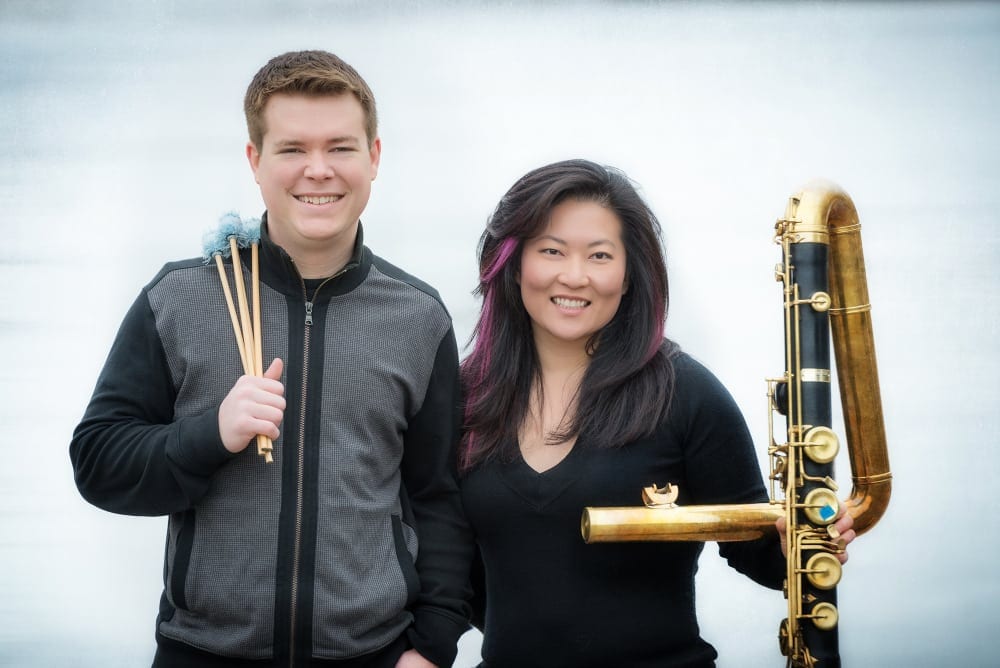 The A/B Duo — flutist Meerenai Shim and percussionist Christopher Jones — came to Atlanta this past weekend to perform in a pair of concerts as the guests of local new music groups Chamber Cartel and the Clibber Jones Ensemble. Originally based in Chicago, A/B Duo’s name is a contraction of “Adams basement,” a slang for the musicians’ Adams Street entrance to the city’s Symphony Center, where they would rehearse.

The product of a Barlow Endowment commission, the extra-musical concerns of “The Stone Tapestry” are about origins, life cycles, and the pace and significance of change. The music itself models change over large time spans, with some segments taking a ritualistic approach to performance that is physically repetitive. The collective performers gave the work a fine rendering.

Given the long-woven nature of the music itself, it is worth noting that the several passing trains, which are a common occurrence during performances at Goodson Yard, did not seem as much an intrusion as with some concerts. Instead, they almost became part of the performance. The trains could be seen through the back windows as they passed, adding their deep rumbles to the overall sonic texture.

Of more concern is that the putatively hour-long work ran considerably longer. That extended duration would not have been much of a problem by itself, except for a significant environmental shortcoming of the evening — the excessive residual heat inside the brick Goodson Yard structure. The sunny day had reached a high of 94 degrees. Goodson Yard soaked in the heat all day and retained it like an oven past sundown. Upon exiting, post-performance, one experienced an immediate and significant drop in air temperature.

In great contrast to “The Stone Tapestry” was the following night’s concert at Eyedrum with the Clibber Jones Ensemble. A/B Duo played some of their own touring repertoire for the opening set, all of which was written specifically for them, often influenced by popular styles and inclusion of live or fixed media electronics. “Echoloquacious” by Matthew Joseph Payne proved a good example, involving Game Boy-styled synthesis in its mix. There is also a video game allied to the music, playable online.

The A/B Duo’s set also included “Isla” by Ian Dicke, and “Things We Dream About” by Ivan Trevino. It concluded with the premiere of “Focused Cyber” by Clibber Jones Ensemble leader and drummer Olivia Kieffer. Well within her developing compositional style of post-minimalist sentiment with an emphasis on rhythmic aspects of cadence, “Focused Cyber” is perhaps Kieffer’s most interesting and colorful composition to date.

The interior temperature at Eyedrum was almost as hot as at the Goat Farm, but Eyedrum has a more persistent Achilles heel that is of increasing concern: safe parking for both patrons and performers at night.

While there is an open lot immediately next door on the building’s south side, its use is problematic. It was unattended, without any means of paying a parking fee. During intermission, patrons and musicians were advised to move their cars from the lot and find street parking, lest their tires wind up chained by the owner.

That required parking at a distance in what is, bluntly, an unsafe part of downtown. Unlike its previous long-time digs, Eyedrum’s current location on Forsyth Street is its own nemesis.

Moving my vehicle caused me to miss the first part of the Clibber Jones set, including the only non-Kieffer piece of it: “Dead Elk Decomposing Nicely in Agnes Creek” by Ryan Taylor. He was filling in as guitarist in the absence of new Clibber regular Erik Herndon, who replaced departing guitarist Darren Nelsen a few months ago. Saxophonist Brandyn Taylor (unrelated to Ryan) also subbed in for CJE saxophonist Tim Crump.

The other CJE selections were familiar fare for most of the rest of the band — percussionist Brandon Dodge, bassist Bill Pritchard, keyboardist Amy O’Dell and flutist Teresa Feliciano. Even with two subs sitting in, it felt like the Clibber Jones Ensemble is reaching a real comfort zone, sounding more and more like a unified rock band than a new music group in the shape of a rock band.

And that’s not a bad thing.