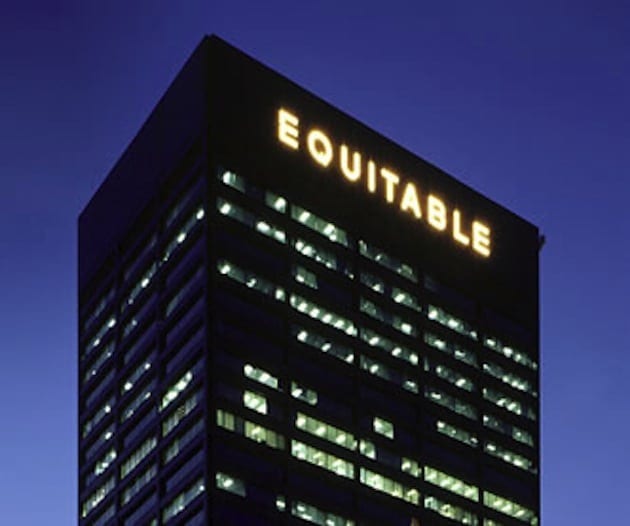 For nearly half a century, the word “EQUITABLE” has stood tall over downtown Atlanta, aglow at night, a distinctive mark on the city’s skyline. A leftover vestige from the defunct Equitable Life insurance company, the building which the sign tops — and lends its name to — is also an iconic piece of Atlanta’s urban fabric.

Designed by internationally renowned, Chicago-based architecture firm Skidmore, Owings & Merrill (SOM) in collaboration with Atlanta-based FABRAP (now Rosser International Inc.), the building is the epitome of modern styling, with sleek black structural members providing a rhythmed cadence across the entire façade of the building. With deep-set fenestration, the building is reduced to a basic expression of repetitive floor plates and columns, rising from a stark plaza all the way to the sign atop the building.

Modernism was born from the desire to express modern building techniques as steel framing made it possible to build ever-taller high-rises. The streamlined, function-driven form was a reaction to the opulence and heavy ornamentation of architecture styles to that point. Rather than apply decoration, modernists distilled a building down to the essence of its materials and allowed each to bare its verisimilitude.

In essence, modernism’s adornment was merely the finesse of the materials needed to construct a building, allowing those elements to express their function. While modernism was widely adopted and became the prevailing style of the mid-century, few architects succeeded in the pure minimalism of material expression like Ludwig Mies van der Rohe, known as one of the fathers of modernism and recognized for works such as the Seagram Building (1958) in New York City and the Chicago Federal Center (1974).

But it was his early small-scale works such as the Barcelona Pavilion (1929) and studies of applying the modern style to high-rises realized later in projects like the Lake Shore Drive Apartments (1951) and Esplanade Apartments (1955), both in Chicago, which would serve as the foundations of the modern movement.

It is no coincidence that the project architects of Chicago-based SOM — acutely aware of van der Rohe’s work — successfully emulated the minimalism and attention to detail. By the time the Equitable Building in Atlanta was designed, SOM had already found success with projects like the Inland Steel Building (1958) in Chicago and Telus Tower (1962) in Montreal.

The modern style of the Equitable Building makes it stand out among the context of 1920s and 1930s vintage classical skyscrapers which surround it in the Fairlie-Poplar neighborhood. And, much like the Breuer Central Library (1980) which replaced the neo-classical Carnegie Library (1902), the construction of the Equitable Building in this neighborhood in the 1960s necessitated the demolition of a classical edifice – the Piedmont Hotel which occupied the site from 1903 until 1966.

But, the modern Equitable Building also represents the demolition of another, arguably more significant, classical building of downtown Atlanta. The building which stands today is the second Equitable Building in the city. The first was constructed down the street, across from what would become Woodruff Park, in 1892 as the city’s first skyscraper.

Designed by John Root — a native Georgian who died at the age of 41, before the building was completed, cutting short a quickly growing legacy — and Daniel Burnham — Root’s partner who would go on to influence development and planning throughout the world — the building stood 11 stories tall until 1971, when it was demolished to make way for the Trust Company Bank headquarters building that now occupies the site.

The columns of the old Equitable Building can still be found around Atlanta, and, until recently, three stood in the plaza of the Peachtree Street Equitable Building. However, during a recent renovation of the building and plaza the columns were removed.

While the minimalism of the Equitable Building makes it a distinctive feature of the Atlanta skyline, it is hard to argue that the most iconic part of the building is anything other than the sign which adorns the top. The stark white “EQUITABLE” contrasts with the bold black mass of the building, leaving no doubt of the building’s legacy. 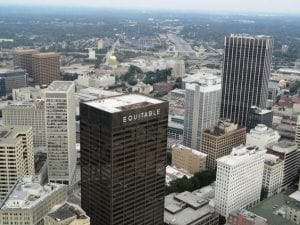 Recently, it was announced that the “EQUITABLE” sign that adorns the top of the building could be replaced as a new tenant takes over office space in the building. The failure of previous rebranding efforts to shake the Equitable name — the Equitable Life insurance company has not been a tenant since 1997 — have not been successful as it has truly become an ingrained landmark in the city.

In many ways, long ago the sign stopped standing for the building’s original tenants, and instead took on an enduring role as a marker on the skyline — to some a reminder of an equitable Atlanta.

It is understandable that a new tenant may want to change the signage to reflect its occupancy of the building, though that move would rob the city of an enduring legacy. While the building has changed hands many times, the sign has always remained a constant, and this time should be no different.

Complicating the matter is the fact that the building, arguably the best example of high-rise modernism in Atlanta, is just two years shy of 50 — the magic age when a building can be listed on the National Register of Historic Places. Given that the signage is an iconic, and integral part of the building design, modifying it may have implications on whether the building will be eligible for listing.

The Equitable Building was the product of destruction of historic fabric in the city, but over time it has become a significant piece of the history of the city in its own right. However ironic it might be to fight for its preservation in its original form, it is something that should be done.

Building off the legacy of architects like Ludwig Mies van der Rohe, the SOM-designed Equitable Building is a unique treasure on the Atlanta skyline and is one of the greatest examples of this modern high-rise construction in the city. With the sign an integral part of the minimalistic aesthetic, it should be preserved into the future.