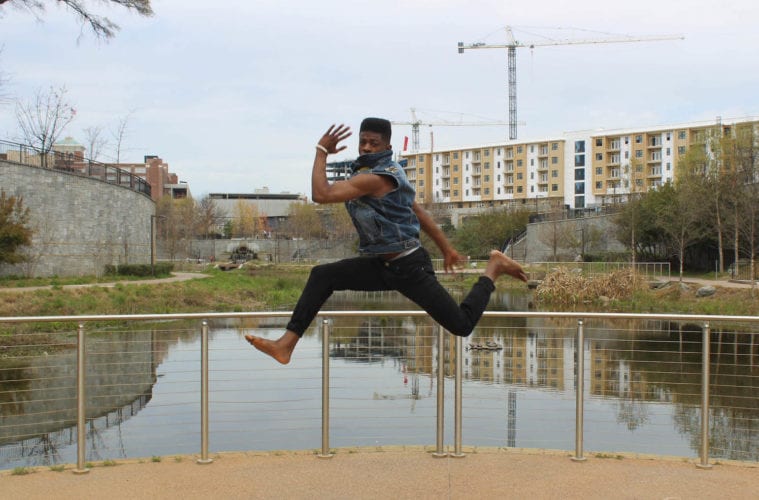 During a recent rehearsal for Komansé Dance Theater’s Skid, artistic director and choreographer Raianna Brown exuded a calm command over the 29 cast members buzzing with energy. It was 8:00 p.m. on a Sunday evening at a Southwest Atlanta dance studio, just a few weeks out from Skid’s world premiere, January 25–26 at Georgia Tech’s Ferst Center for the Arts. As Brown presided over a room of organized chaos, her tone was even more surprising because of her young age and relative inexperience. And yet, this 23-year-old graduate of Georgia Tech responded to the stress, which the eve of such a big moment necessarily brings, with a precocious confidence and a disarming humor.

“This looks like saltine crackers right now,” said Brown after an aerobic run of what seemed to be a finale section. “And I need you to give me more spice. This comes late in the show, so whatever you do, don’t get tired.”

Petite and animated in small round-frame glasses, Brown allowed for a playful digression about whether or not saltines were “nasty” (in a room this full, there were several differing opinions) before getting back to business and giving more individual notes about the nuances or “spice” she was after. “These arms are breathy but not slow. Try to move from your elbows here.”

Meanwhile, a woman popped her head into the studio to give Brown a time check. “It’s 8:21,” the woman said.

Brown nodded her head and moved on to the next section. “Does anyone have a question about intent before we run this?” she asked. This question of intention — asked frequently throughout rehearsal — is integral to Brown’s work and seems to emanate from her character. She made headlines in the Atlanta Journal-Constitution and publications like Teen Vogue back in 2016 when, as a member of Georgia Tech’s Gold Rush dance team, Brown took a knee, in solidarity with Colin Kaepernick, during the national anthem at a Tech football game (she was the only one). The photo of her respectful protest, in response to police violence against people of color, went viral. Themes of social justice also underpinned Brown’s in Human, which received its premiere in 2017 at the Ferst Center under the moniker RAIIN Dance Theater.

Brown grew up in Atlanta, and her early days of dance classes began at Spelman Dance Camp and at a local competition studio. Though her education became more diverse and serious over the years (she also attended summer programs at the Ailey School in New York City and Alonzo King LINES Ballet in San Francisco), there was never any question whether or not she would attend college, or where she would go. “My parents and my two sisters went to Tech,” says Brown. “So I made a deal with my parents: any money we saved through my scholarship there, I could put towards my dance training in the summer.”

She continued to study dance during the school year with a dual enrollment program at Emory University — where professor and choreographer George Staib encouraged her to choreograph — while working toward her degree in industrial engineering. Recently graduated, Brown is already working as an engineering consultant at CMB Global Partners. The flexibility of the job has made it possible for her to build Komansé Dance Theater and hone a choreographic voice that bends toward social injustice.

Madison Cario, former director of Georgia Tech’s Office of the Arts, has been a mentor to Brown. Cario championed Skid, which has been in development since last April, and was pivotal in helping Brown network and connect her passion for social activism with arts and technology, in addition to giving Brown the space, both for Skid and in Human, to create on a large scale. “That amount of ‘yes’ coming from Madison has made so much possible,” says Brown.

A celebration of black culture and a reckoning, Skid explores the effects of dehumanization, marginalization, gentrification and addiction, through abstract and emotive styles of dance. “The title of the show is a reference to ‘skid row,’ which in some cities is an actual place but in most is a term used to refer to the area of town where people experiencing homelessness congregate. Typically, skid row is not located in the middle of the town or city, but rather these people are pushed to the side and ignored,” says Brown. Raianna Brown is honing a choreographic voice that bends toward social injustice. (Photo by Kemi Griffen)

A diverse range of bodies, ages, races and dance backgrounds (from ballet to jazz to street) are represented in the unusually large and eclectic cast, while Brown’s movement language mixes more classical modern dance (the Horton technique of Alvin Ailey) with other dance styles and techniques from the African diaspora and popular social dances like house and waacking. Similarly, the score of the show includes a wide spectrum of sound, from hip hop, gospel and jazz music to classical music and an original composition. The costumes are no less ambitious. They will have 3D-printed aspects, designed by Shami Oshun, that play off of, rather than imitate, the layers of clothing homeless people often wear to survive. Working with so many facets, Brown’s desire is to break down the myth that marginalized people are one-dimensional.

It is worth noting that Brown is also performing in some of the group numbers of the show, and that she wants to eventually use her engineering skills to help with humanitarian logistics and disaster relief. Fittingly, “Komansé” means “the beginning” in Haitian Creole. While Skid looks to be a prodigious launch for Komansé Dance Theater, and a dance performance not to be missed, it also marks an auspicious start for the multifaceted Brown: a young artist and engineer with a strong vision and the hustle to keep making it a reality.