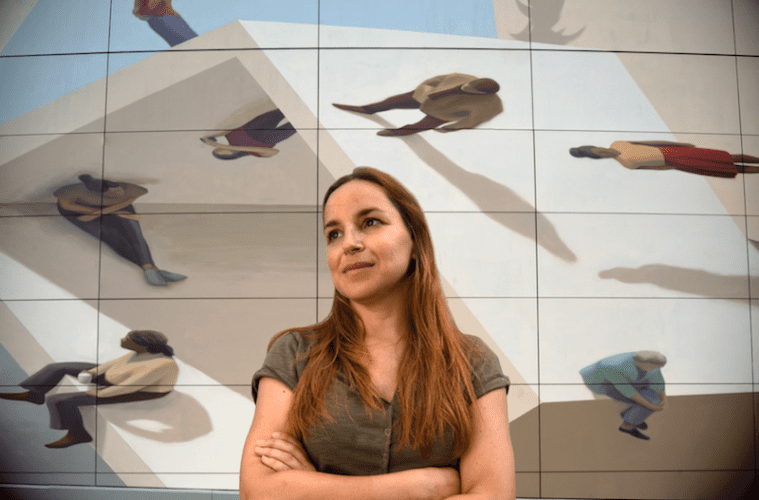 "Merge," the new Midtown mural by Barcelona artist Cinta Vidal is a double anamorphosis, a distorted artwork that appears normal when viewed from either of two specific points. (Photos by Brock Scott)

In more ways than one, finding the right artist to create a mural on the side of Coda Tech Square in Midtown was a tall order.

First of all, the mural is enormous: 150 feet wide, running along Armstead Place between West Peachtree and Spring streets, by 40 feet high. The building on which it is painted also boasts large-scale significance: Coda is the flagship structure of Georgia Tech’s Technology Square, the eastward expansion of the school’s campus across the Downtown Connector. The 21-story building was developed to encourage collaborations between university researchers (including students) and industry to create new technologies.

With that mission top of mind, Coda Tech Square and DataBank, one of its developers, approached the Atlanta nonprofit Living Walls in 2016 to select an artist for the mural commission. Living Walls’ charge in its international search was to select an artist who understood architecture, integrated math and science into their process, and could create a work of art that conveys a story and humanizes the concept of technology.

Vidal has created murals in Barcelona, Hong Kong, Honolulu and — on the same spring trip that brought her to Atlanta for the first time — San Francisco. She completed the Coda mural, titled Merge, her largest to date, in June.

The artist says she has “never stopped experimenting” and, indeed, her Atlanta mural is her first double anamorphosis, defined as a distorted artwork that appears normal when viewed from either of two specific points.

“In this way, the mural interacts with the viewer who will be able to discover how the image is transformed as [he or she] passes in front of it,” Vidal says. The artist-suggested viewing spots for Merge are marked on or near West Peachtree and Spring streets. 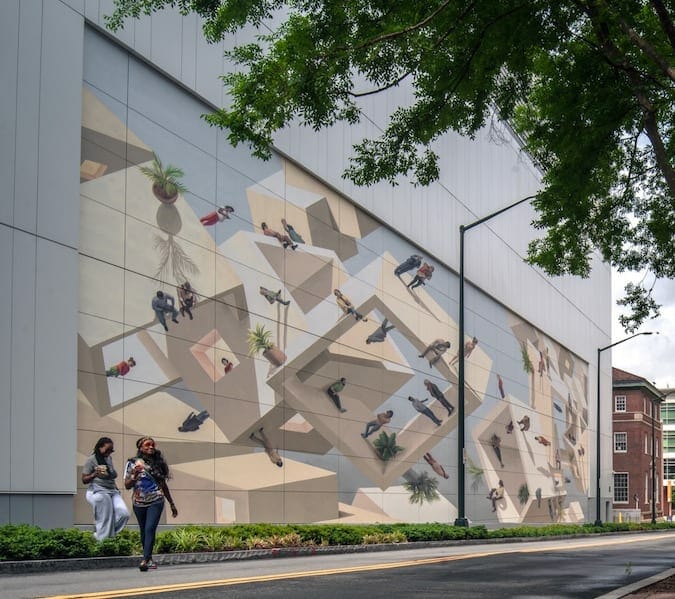 The perspective here shows “Merge” from the West Peachtree Street side of Armstead Place. Stand at the second tree from the corner at Spring Street to see it from one of its two intended viewpoints. 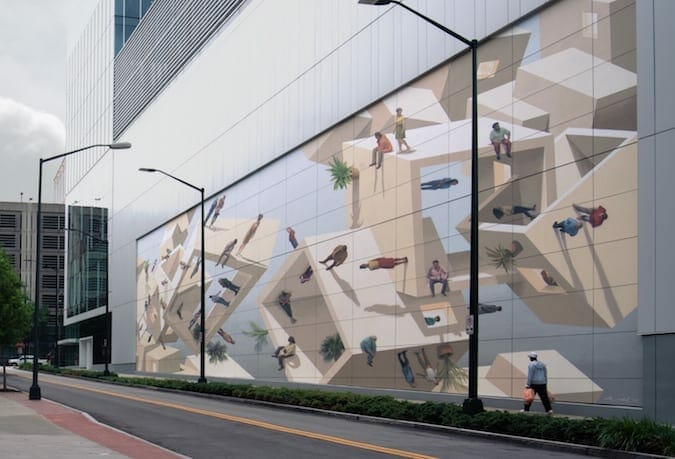 This perspective shows the mural from the Spring Street side of Armstead Place. Stand in front of the parking garage at the corner of West Peachtree to see its second intended viewpoint.

Vidal spoke to ArtsATL by email after returning to Spain.

ArtsATL: How did you start doing anamorphosis murals, and what are the challenges in creating one?

Cinta Vidal: I first made an anamorphosis mural 18 years ago when working for the Castells i Planas scenography workshop [in Cardedeu, north of Barcelona]. Almost a decade later, a master of the subject, Italian muralist Peeta, taught me a different technique for making an anamorphosis. I hadn’t done any since then until the Coda mural, which is my first double anamorphosis.

ArtsATL: Is there ever concern when you are planning a single or double anamorphosis that viewers’ perspectives will not work as well as you want?

Vidal: There is always a concern, but I studied the space very well and was very prepared. It’s a complex technique where every line must be precise. I put a lot of effort into this mural, and I’m very happy with the result.

ArtsATL: Living Walls said that it sought an artist who could, among other things, humanize technology. Can you discuss your feelings about tech? It seems that we increasingly live in a world dominated by technology, yet so many of us have concerns about the way it comes to dominate our lives.

Vidal: Technology is just a tool, but it is very sophisticated. Like any tool, the important thing is how we use it. I think it has made great strides, especially in medicine, logistics and communication between people. The problem is that the society in which we live has accelerated a lot, and if we do not become aware, technology absorbs us and dehumanizes us. We need to be alert and educate the new generations on the proper use of this tool.

ArtsATL: In your previous artwork, gravity is shown to be fluid, not the force that predictably holds us to the ground. Can you talk about why you play with orientation in your art, including in your Atlanta mural?

Vidal: Each person has their own perspective of the world, and my work is my way of expressing this idea. Sometimes we are very close from a physical point of view but very far from an internal dimension. I always play with gravity to express that. In this mural, I try to represent how new technologies interact with people in a diverse and complex way. The abstract architecture in which the characters travel in a relaxed way refers to the scientific innovation that transports us to unsuspected places. 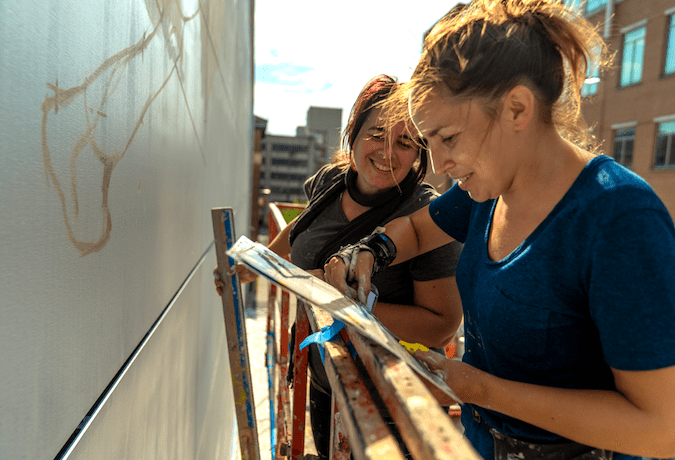 Muralist Cinta Vidal (foreground) and assistant Helena Salvador, on a lift at Midtown’s Coda Tech Square, confer on the dimensions of the mural-in-progress.

ArtsATL: For your 2018 exhibition of paintings at Thinkspace in Los Angeles, the gallery’s website said your “fractured landscapes and architectures” convey the “feeling of existential disconnect when faced with the incongruity of our inner and outer worlds.” A story that appeared online the next year said that your “topsy-turvy” architecture is meant to symbolize “human nature and what it means to live among other people.” So… these writings seem to suggest something of a contradiction — that you focused on disconnection among people or, alternatively, connection. Was emphasizing connection or disconnection – or perhaps both at the same time — your intent with the Atlanta mural?

Vidal: Yes, because it is the reality around us. When we move in a public space, we see many people, but at the same time we are disconnected because we do not know them. We all walk through the same spaces, where we are sometimes accompanied and sometimes alone. I’m not looking for any negative side in the solitary characters. I think I’m just doing a portrait of what we see on the street. I love the fact that we are in harmony with this kind of connection and disconnection.

ArtsATL: Can you talk about the mural you did at the Facebook office near San Francisco during your visit? What does it show, and what are your thoughts behind it?

Vidal: I wanted to work on the concept of social networks materialized in buildings connected by walkways, bridges, stairs. It is ultimately the role that social media plays to make us feel less alone. Each architectural island refers to a different culture and style, expressing the idea of how the internet can bring us closer to distant and unknown worlds.

ArtsATL: You are curating an exhibit for this fall at MOAH (the Lancaster Museum of Art and History) in Southern California, which focuses on artists responding to architecture. Can you talk about this exhibit and what fuels your ongoing interest in the built environment?

Vidal: The exhibition at the MOAH will be titled Concrete. I will present a series of paintings inspired by the dark period that we all had to live through recently with the pandemic. All the paintings will have a nocturnal atmosphere, and the characters will be sheltered inside their homes, from where warm lights will come out, in contrast to the darkness and cold outside. Architecture reflects how we exist, how we express ourselves, and how we protect ourselves from the outside. I have always been fascinated by its infinite possibilities.