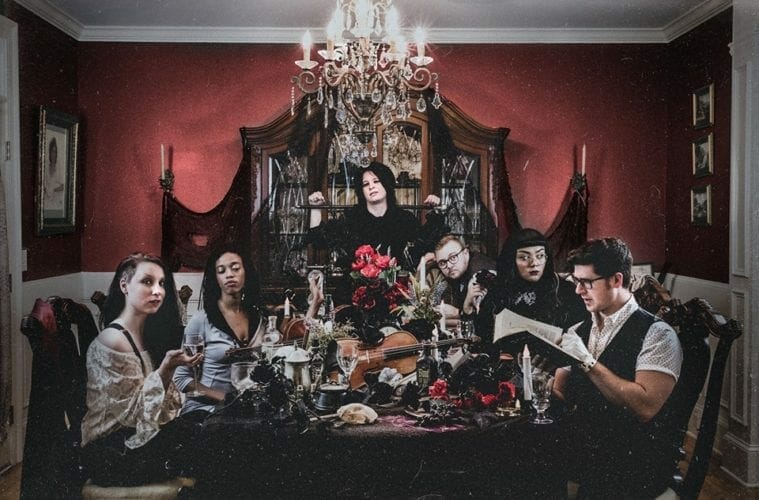 A haunting brew of ’20s jazz, Broadway and garage rock add to Sarah and the Safe Word’s multifaceted sound. The group released Red Hot & Holy via Take This to Heart Records last month, leaning hard into the band’s self-proclaimed cabaret rock with themes of sexual liberation and self-realization.

All six of the band members identify as queer and pride themselves on being a safe space for all members of the LGBTQ+ community and beyond. Lead singer Sarah Rose met founding band member Kienan Dietrich (guitar, backing vocals) 12 years ago. They, along with bassist Brandon Ward, debuted in 2016 with an EP titled Afterlife. Now, the lineup has changed and grown to consist of Susy Reyes (violin), Courtney Varner (viola), Beth Ballinger (keys) and Maddox Reksten (bass).

Sarah and the Safe Word plays Connect Live in Woodstock on June 12 and performs for Augusta Pride on June 22. But first, ARTS ATL caught up with Rose to discuss everything from touring to LGBTQ+ identification.

Sarah Rose: When we started the band, we had an idea [of] what we wanted to be but not quite how to get there. We realized we needed strings and keys to do what we wanted, and we grew very quickly from a three-piece to a six-piece. We were getting our training wheels on with Strange Doings in the Night (2017), and Red Hot & Holy is taking life in the way we imagined.

We were open to the idea of signing on a label and had some offers, but we were protective of who we wanted to work with; we’re kind of a strange band. What [Take This to Heart Records] has done is given us a bigger platform to create what we’ve been creating for a long time now. They haven’t had their fingers in the pie, and we can continue doing what we’ve been doing.

ARTS ATL: How do you define cabaret rock?

Rose: So, cabaret rock is a term we’ve used for a couple of years now. Cabaret is the punk rock of the 1930s. We’re about sexual liberation and pushing boundaries. Our band marries the spirit of cabaret in the ’30s with the spirit and ethos of modern-day punk rock. Sarah and the Safe Word released Red Hot & Holy on May 24. (Courtesy of the band)

ARTS ATL: Who are your musical influences, or what bands do you think you could be compared to?

Rose: We draw influences from ’20s music such as jazz and Broadway. Susy also plays in a mariachi band and is a classical music studies major at Kennesaw State University. Courtney is a middle school band teacher. Beth is a blues musician. There’s an appreciation for the classics and bluegrass. I grew up on everything from Fleetwood Mac, Ella Fitzgerald and old-school jazz music to punk rock acts such as NOFX and Rancid. I’m also a fan of Panic! At The Disco and Boston-based The Receiving End of Sirens, which broke up in 2008.

ARTS ATL: How important to the band is LGBTQ+ identification?

Rose: I’m bisexual, or pansexual, and transgender. I prefer [the pronoun] “they” but won’t be upset with “she.” I consider myself femme and nonbinary. We are proud of being an all-queer band.

We’ve toured in conservative Republican states such as Texas, Florida and Alabama. Despite what you hear, kids are excited to see bands touting a safe space. Kids in Alabama know our shows are a place to relax and have fun. They were excited to see a band like us come through town.

I’ve been playing about 12 years and have never seen so many out, vocally queer musicians. Now, in most of the bands I know, if the front person isn’t queer, the rest of the band is. Atlanta has an explosion of bands expressing themselves through music. We all identify as LGBTQ+, and I’m proud to be an openly nonbinary person. You have a responsibility to be an advocate and speak up for your community.

ARTS ATL: What themes do you see recurring in your music and lyrics?

Rose: Our first EP is the darkest body of work, written after a suicide attempt and a breakup. I got all my dark stuff out early in the band’s career. We try to be optimistic. We avoid politics because we want to create something ethereal and fantastical. We want a storybook with pirates and drag racing, and the biggest theme on Red Hot & Holy if you listen all the way through is liberation — self-realization and optimism and sarcasm in the face of reality being really shitty right now.

One song on the record is a little more political, “Dig a Fancy Grave,” but the record itself isn’t political. Rather, it creates a sense of escapism for the listener. I have a love of dark imagery and campy stuff; I listened to a lot of Japanese stuff such as visual kei bands like Dir En Grey, and I’m fascinated by theatrical and image-oriented acts like Malice Mizer and My Chemical Romance.