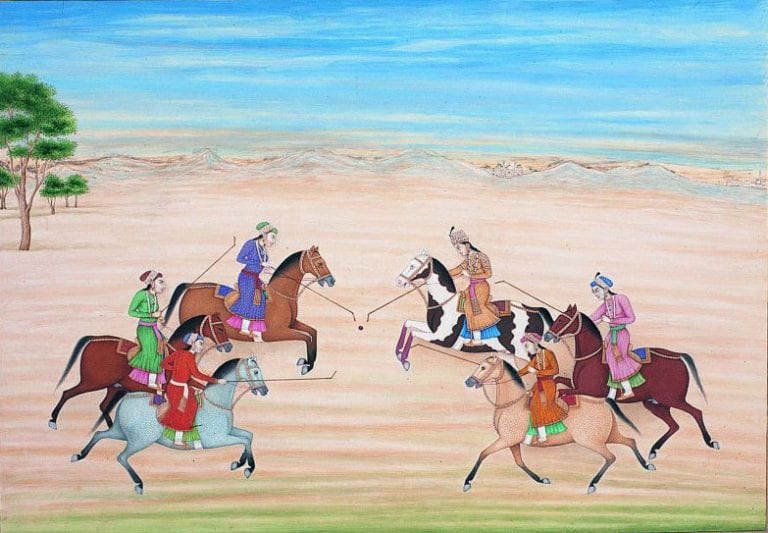 As a child growing up in India, Ruby Lal first heard stories about Nur Jahan from her mother, who referred to the fearless empress who killed tigers as “maharani” or “the queen of queens.”

Today, Ruby Lal is a professor of South Asian history at Emory University and an acclaimed historian of India’s Mughal Empire. Her third book, Empress: The Astonishing Reign of Nur Jahan, delves into the real life of the 17th-century empress who rose to power in a world dominated by men. ArtsATL spoke with Lal about the myth-like stories surrounding Nur Jahan, the real woman behind the legends and what the empress’ amazing life can tell us about our own times.

ArtsATL: Do the sort of cultural legends about Nur Jahan you heard as a child differ greatly from the historical realities you found in writing the book?

Ruby Lal: As a little girl, I was fascinated by the idea of queens and princes . . . but the “queen of queens” sounded like magic in my mind. When I began my research on this book, I kept hearing the story of Nur Jahan’s romance with the emperor. I also kept hearing fact-like information delivered as if in bullet points: she had coins etched in her name, she passed imperial orders, she was a tiger hunter . . . all signs of being a sovereign. As I did my research, I also found out that there were several movies made about her, an opera; she was the centerpiece of fiction in multiple languages of the Indian subcontinent — Hindi, Urdu, Punjabi, Sinthi . . . Yet almost everything stopped at her marriage with the emperor, Jahangir, in 1611. Yes, 1611 was a big year for her, but her life gained another dimension after that. She was from an aristocratic family, not the royal one. She came to the harem as a widow and as the mother of a girl and became the wife of the emperor; she was not just a young woman who would give children to the emperor.

Nur Jahan became the co-sovereign with him. If we think about the great Mughals of India, she was one among them: that’s why my book is called the Astonishing Reign of Nur Jahan. Everything should’ve gone against her, and yet she rose to be this extraordinary empress, 350 years before our first Democratic female leader [Indira Gandhi, Prime Minister of India 1966–1984]. That’s an astonishing achievement.

In my research, I had to understand what it technically meant to be a sovereign in Mughal, India. In Islam, a sovereign minted coins, issued imperial orders and owned a signature. Other documents of the time that I looked at mentioned that Empress Nur Jahan hunted tigers a few times right outside of the capital of Agra, and I had to ask myself, why are chroniclers and other historians constantly talking about her hunting? They were talking about her hunting because only kings in those days had the right to hunt; anybody else was prohibited from it. Emperor Akbar had previously taken up the practice of coming outside onto the imperial balcony and showing himself like a god or goddess would in the temples. Nur Jahan also projected herself from the imperial balcony. These were extraordinary practices that she engaged in.

Looking at Nur’s life after her marriage to the emperor, looking at her childhood — she was born on the road as her parents were moving from Iran to India — looking at her first marriage to a Mughal officer involved in a plot against Jahangir — these were all facts. People would just mention them, and that’s it. But you must give a flesh-and-blood feeling to this figure.

ArtsATL: Popular ideas about Nur Jahan can have sexist overtones due in part to the fact that the stories about her were written almost entirely by male chroniclers from the 18th and 19th centuries. For instance, in stories, the weakness of her husband, Emperor Jahangir, often becomes the main reason behind her political, social and economic influence. What do you think was the couple’s real imperial balance of power?

Lal: My argument is that they were co-sovereigns. She was consistently ruling with him. He never gave up kingship, of course: he was the de facto emperor. Historians, until very recently, classified him as an alcoholic; people even said, “that’s why Nur Jahan rose to power,” which completely diminishes her. But then again, there were many other women in the harem. Why didn’t they rise to power? Nur Jahan had the support of the emperor and that of her father, who was like a prime minister. In a society politically dominated by men, she ruled. Toward the end of his reign, in 1626, Jahangir was taken captive by one of his own nobles. Nur Jahan strategized, got on her elephant and went to release the emperor. That was difficult to grasp for the chroniclers of that time. She had tapped into her military capacity. The issue of Nur Jahan’s erasure is, of course, a very important question. With time, her power got lost, and what we remember in popular imagination and in historians’ accounts — up until now — is this caricature of a woman. My book is restoring her to her glory.

ArtsATL: Nur Jahan was clearly not your usual harem wife. What do you think contributed to her fearless nature and natural leadership?

Lal: I love this question! We [historians] have consensus on her birth time and place in India. She had an aristocratic background, and her parents were from Iran: they left the country to avoid a complicated political strife. At the time, India was under Akbar the Great. The country was regarded as this great home for those seeking protection. We are talking about a pre-nation world in which migration was the norm, not an unusual practice. People moved in all sorts of ways. We have this information about the world of her childhood. In addition, her mother was a very vivacious and creative woman. Her father was one of the top noblemen of the empire.

Nur Jahan was classically trained and educated, yet she underwent a cerebral upbringing that didn’t isolate her from men, as was the norm for “respectable girls.” I think that after her first marriage when she moved to “the land of the Bengal tiger,” she had to learn how to function on her own. Her husband, who was a Mughal officer, had to travel a lot to support the governor of their state of Bengal and the emperor in Agra. Nur was living in the land of tigers, so the understanding is that this is when she gained her skills as a hunter. This is also the time when her husband would’ve leaned on her and talked to her about state matters. Then, after her husband was involved in the plot to assassinate the emperor and ultimately killed, she arrived at the harem where she was under the guidance of three great matriarchs, her mother and the emperor’s two step-mothers. These older women were great political advisors and conciliators. This is all a great setup of learning and cultivation, and she was a quite brilliant woman with a brilliant mind, so she absorbed all this knowledge. 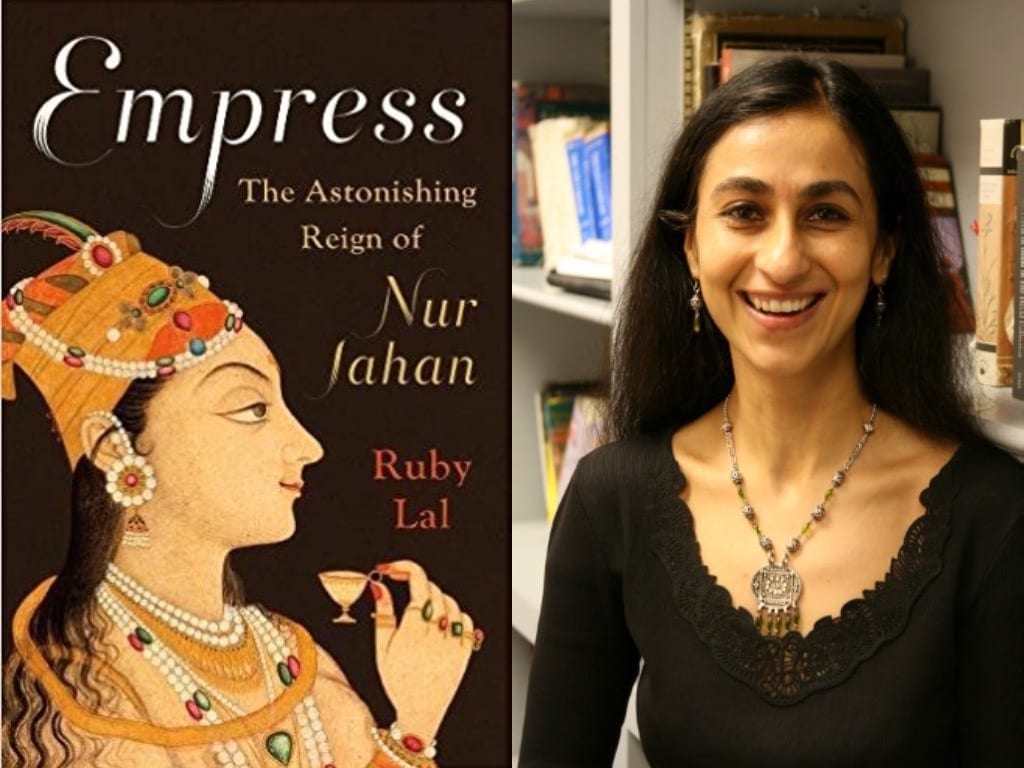 ArtsATL: Do you consider yourself a feminist historian? If so, how does Nur Jahan’s story forward your ideas about gender equality? How can her history inform a reader’s present, especially in the age of #MeToo?

Lal: Yes, I am a feminist historian, and feminist history is history. This world is half men, half women. There’s this other thing. I just came from a book tour in New York, and many people asked: how did Nur Jahan happen [back in those times, in India]? We shouldn’t make assumptions about women’s leadership, their talents and their incredible boldness, at any point in history. We shouldn’t make assumptions about the past, and we can’t make assumptions about different parts of the world. These stories, these biographies, need to be put out there. What the #Metoo movement is doing, philosophically speaking, is bringing out silenced voices. The more we tell, the more stories will emerge. I think Nur Jahan’s history is also the history of India — she’s of course this incredible woman, but there’s also the story of the lands she lived in. As a reminder, she was culturally a Shi’a Muslim woman: we think of confessional identities as very fixed, but they’re not — they’re much more experimental. She married a Sunni Muslim man, her second husband, whose mother was a Hindu. This is a land in which you have Jesuits; this is the land of the Buddha . . . All these things amount in Nur Jahan’s biography.

ArtsATL: Are there any women in today’s culture that remind you of Nur Jahan?

Lal: I think each woman leader is so distinctive in her own way. Look at the incredible work of Hillary Clinton, Angela Merkel . . . There’s a lot of amazing work being done by women. The point is not really how one woman leader reminds you of the other, but how gleeful, creative and dynamic each of them is, how they will work against all odds to be the brilliant women they are no matter where they are or what time in history they inhabit.

Ruby Lal will discuss Empress: The Astonishing Reign of Nur Jahan and sign copies of her book on Thursday, August 2, at 7 p.m. at the Jimmy Carter Presidential Library. The event is free and open to the public.