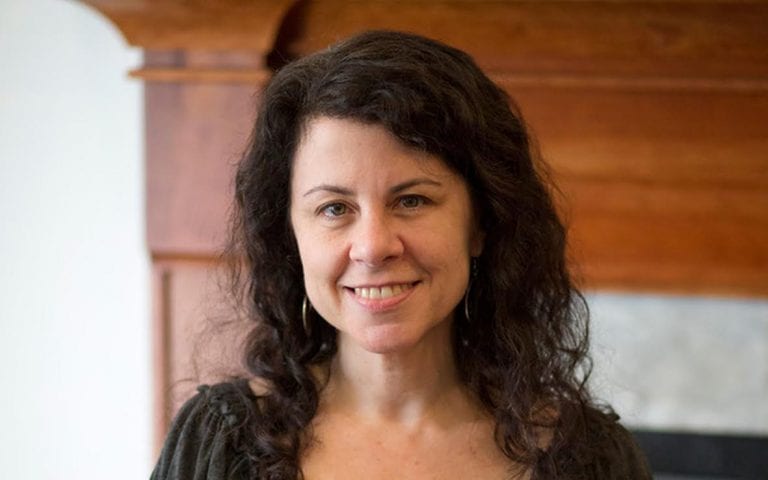 Georgia Public Radio music host and producer Sarah Zaslaw grew up in Ithaca, New York, where she began taking violin lessons at age four. Zaslaw holds bachelor’s and master’s degrees in European History from Harvard and the University of Michigan, respectively. Her first radio experience was during college, at WHRB in Cambridge, Massachusetts. After a period of time in the publishing industry, she returned to radio in 1998, joining the staff of Georgia Public Broadcasting.

ArtsATL recently caught up with Zaslaw for a conversation about her 20 years as a radio host and producer at Georgia Public Broadcasting. The following Q&A is drawn from that conversation.

ArtsATL: Tell us about your background and how you first got into broadcasting.

Sarah Zaslaw: Music is the air that I breathe and the water that I swam in my whole life. My father is a musicologist, and it was just around me all the time. The broadcasting part came in college. During my freshman fall at Harvard, I saw a flyer about trying out for the radio station, and that first semester was like taking an extra class. They put us through the wringer. We had a lot of work to do learning their very precise philosophy of how to program. I did this student-run commercial station, WHRB, for three years. Never intended to get into it professionally. I care more about the music than the medium.

ArtsATL: How did you come to work at Georgia Public Broadcasting?

Zaslaw: Years later, after I’d been in publishing as a freelance copy editor, gotten a masters in history, moved around the country, I landed in Atlanta. My husband’s an academic, a mathematician, and he got a job at Emory University. That’s what brought us here in 1997. At that point, I thought I’d moved enough commas to last me a while and was thinking about my next move. I did a little career counseling and got the results the same week that I happened to interview at GPB. I felt like something was clicking into place. I wanted to do something important with cultural content, to share information, to be around intellectual or artistic people.

In February 1998, I became an intern in the TV pledge department upstairs at GPB, and then separately I applied for a part-time board operator position at what was then called Peach State Public Radio, and started working at the beginning of May 1998. It seemed to fit well. The week I started at GPB was the same week I found out I was pregnant with my first child, so those early years were sort of a blur of morning sickness, fatigue and rushing back and forth to daycare, but it was part-time and it worked.

I was operating the board during Performance Today and Adventures in Good Music with Karl Haas in the morning. At that time, the schedule for the statewide network had classical music from 9 a.m. until 4 p.m., with an hour out for lunch, and then it picked up again at 7 p.m., heavily classical music.

ArtsATL: When did you start programming and hosting your own shows?

Zaslaw: My second year there, I was given a Saturday afternoon show during the Met Opera’s off-season. I created a show called The Musical Offering. I scripted it carefully, and it won a Gabby Award for best locally produced radio show. That ran for a couple of years, then the music director, Winston King, left, and I became the midday classical host for the network. At that time we also had separate classical hosts in Augusta and Savannah, so I was one of the three on Peach State Public Radio in midday back then.

In 2006, Terrance McKnight launched our Atlanta Symphony Orchestra series. He left for New York a few years later, and I took over that show as well, hosting the ASO on GPB. The Atlanta Symphony sends us tapes of concerts. I introduce soloists and conductors as they come through town, then I write and assemble the show. That’s a 26-week series each year.

ArtsATL: It was not too long ago, though, that the Midday show you were hosting got shifted to night and is now called Nightcap.

Zaslaw: At the beginning of New Years 2017, the network schedule changed. A few years ago, what had been a network for the rest of Georgia outside Atlanta acquired an Atlanta presence, but broadcasting on 88.5-FM during the day only, 5 a.m. to 7 p.m. — an all news and talk schedule. For a while, the Atlanta station and the rest of the state stations had different programming during the day. It was decided to align those starting in 2017, so now all of them have the same news/talk schedule during the daytime. Classical music begins in the evening at 8 p.m. with Performance Today, and I’m now on at 10 p.m. hosting Nightcap Monday through Wednesday, and the ASO on GPB Thursday in the same time slot, and that repeats Sunday at the same time. WUGA also takes my Atlanta Symphony show on Thursdays.

ArtsATL: Your shows can be heard on all of GPB’s 18 terrestrial stations except Atlanta, but you can be heard in Atlanta via internet digital streaming, right?

Zaslaw: You can stream our signal through our website; there’s a GPB app, and a skill on Alexa as well. You can say, “Play GPB” and you can have GPB Atlanta, GPB Macon, GPB Savannah or GPB Statewide or Network.

ArtsATL: How different is hosting a locally produced, network-wide show versus a show for just a local audience? How many terrestrial stations are there?

Zaslaw: It’s a mixed blessing not to be on in one particular community. I look sort of wistfully at my colleagues around the country who are a real presence in one community. They can promote the arts in that community,  interview local people and know that it would be relevant to everybody who was listening, and be a kind of fixture. When you’re statewide, you spread yourself pretty thin. Although I sometimes do interviews with people from around the state, I know that someone in Augusta might not be that interested in what’s going on in Columbus. Similarly, someone in Dahlonega may not care what the Valdosta Symphony is up to. I don’t go into it in a lot of detail, but I do want to create the impression that there’s a lot going on in many places around Georgia, whether or not I’m talking about the one in your backyard at the moment.

ArtsATL: Does the 10 p.m. airtime for your two-hour show impact your programming differently from broadcasting in midday?

Zaslaw: When people are winding down at the end of a stressful day, getting ready for bed, it’s a better time for more music and less talk. I feel like the best bang-for-the-buck in keeping that relax[ing] musical atmosphere is just to briefly mention upcoming concerts and play something by that performer or play that piece. It gives me an excuse to mention it, and it’s just part of the quick intro into the music. I’m not trying to stuff it with information at that time of day. We do still have five-minute newscasts at a minute past the hour so people can keep in touch with the outer world.

A difference in my life with the schedule changes is now I record the show rather than doing it live, so I don’t need to be at the station till midnight. It gives me more flexibility, in that I used to be very tied to the board. Now I can record it, and it will air when it needs to through automation.

ArtsATL: What is your general philosophy for classical music programming?

Zaslaw: It’s different from the way I was trained at WHRB in college. They had a very specific philosophy that every three-hour music shift needed to include each of six chronological periods, from medieval to contemporary, and no chronologically adjacent periods could be next to each other on your playlist. It became a brain teaser to put together the shows in college, so I don’t do that. I think I do stay closer to the 18th and 19th centuries on the whole, but it’s not a rule. Though I’m not on a mission to challenge my listeners, within the comfortable zone in question I do always make sure there’s some variety of period, mood, length and instrumentation. I’ll start with a piece with a concert tie-in, or a new recording, or something worthy I realize we haven’t heard in a while, and build the hour around that.

Classical music, or however you define that kind of category, can appeal to anyone who has ears and time and attention. It’s really just a matter of exposure, and radio broadcast is one of the best, efficient and cost-effective ways to reach a lot of people. Through the GPB Radio Network we’re able to provide classical music, NPR and talk programming to communities all across the state that would not be able to support a service like that by themselves. You really feel during fund drives, when the calls are coming in from all over the state, that towns and hamlets hither and yon are really banding together to make this possible, to keep music and other valuable programming on the air for all of us. I don’t know how it feels to the listener, but at those times, I feel like we are a united state.