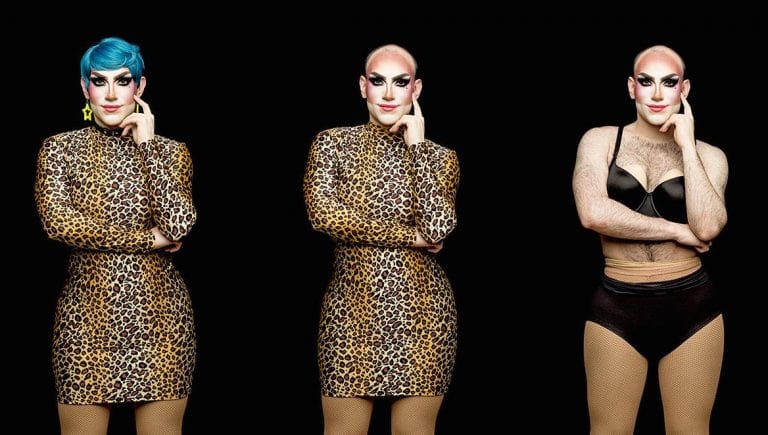 Atlanta-based photographer Jerry Siegel has famously captured images of his native Selma throughout his career, and his ongoing series of portraits of Southern artists has likewise earned him great acclaim. But an exhibition opening this Friday at Spalding Nix Fine Art marks a new direction for the artist: stark, striking portraits of Atlanta drag queens, in and out of drag, as well as sequential shots of various states in between. ArtsATL sat down with Siegel in his midtown studio to discuss the new work.

ArtsATL: How did this series begin for you?

Jerry Siegel: A friend of mine was using the studio and was working with a dancer [Joshua Rackliffe of Decatur’s CORE Dance, who also performs drag under the name Brigitte Bidet]. During a break we started chatting, and he was telling me about all his dance projects, and he also mentioned that he did drag on weekends. Most of my work is shooting artists around the South, or I go to the Black Belt, so I travel a lot. I’m always on the road. I thought shooting something in town would be neat. On a fluke, I said, “Do you want to do a photo shoot?” He said yes. My first thought was a diptych showing the two sides of him: the public, performing side and the personal, more private side. He told me it takes two hours to do the make up, so I told him, “It would probably be better for you to come in your make up and then take it off.” While I was setting it up and thinking about it all, I came up with the idea: instead of having side-by-side shots of him in and out of drag, having him strip away the drag in layers. That’s why the show is called Reveal. Brigitte was the first one. He ended up eventually introducing me to five or six of the girls. I didn’t feel like I could just walk into a club and walk up to people. I felt like going through one of the performers. They had seen the pictures I’d done of Brigitte. It was Brigitte then Peaches then Evah then Taylor . . .

ArtsATL: How many subjects did you photograph in total?

ArtsATL: It sounds like you didn’t know a whole lot about drag before you started. What have you learned? What were your observations?

Siegel: I knew nothing. I’ve learned there’s a lot more to drag queens than a man dressing in women’s clothes. It’s performance art. It’s been a real eye-opener as far as what I thought drag was and what it really is.

ArtsATL: Did you know any out gay people when you were growing up in Selma?

Siegel: I didn’t, but I don’t think I was aware of it. One of my good friends and I used to ride our little motorcycles around town when I was 13. We used to go pick mushrooms and boil them down for mushroom tea. We’d go to a friend’s house, two guys that lived together. Now in hindsight, I know that they were a couple. It just didn’t dawn on me then. There are about eight people I grew up with that didn’t come out ’til college or after. I have as many gay friends as straight friends now. It’s never been an issue. I don’t know if I ever thought about it.

ArtsATL: Your other projects include photographing the Black Belt and taking portraits of Southern artists. Do you think of these new photographs as Southern as well?

Siegel: That was part of the thing with the Southern artist series. One guy said, “I’m not a Southern artist. I’m from New York. My work is abstract; it’s not about the South.” I said, “Yeah, but you’ve been living and teaching in the South for 25 years, so that makes you a Southern artist.” You can say these are all Southern drag queens. They’re all living in Atlanta and performing in Atlanta. I did a series called Ten Jews Left, which was all that was left of the Jewish congregation in Selma. Even though there were some portraits, there were pictures of the temples, there were pictures of the cemetery, there were pictures in people’s homes. To me that was a portrait of a dying congregation, a congregation trying to hold on. It’s a portrait of Selma. It’s a portrait of the region known as the Black Belt. In the Black Belt book, there were landscapes, there was a whole picture series on the house that I grew up in. But to me, that was a portrait of a home. The South is really important to me. It’s where I grew up and who I am. I think the connecting line is always portraiture and people.