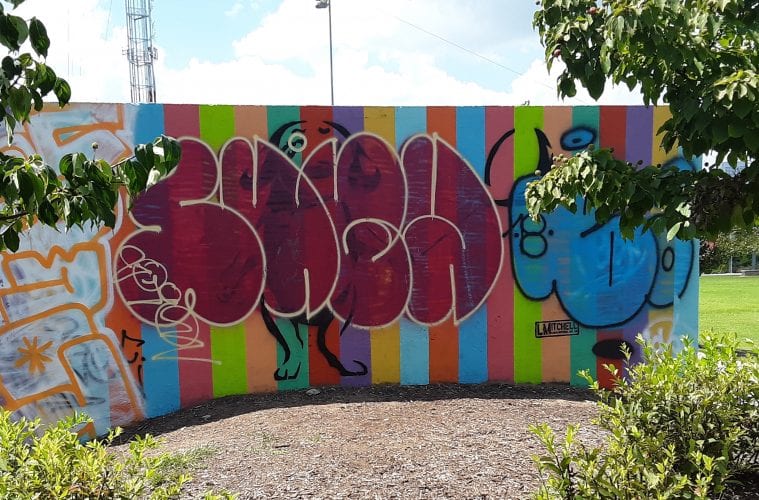 A new mural at Atlanta’s Historic Fourth Ward Skatepark evoked a decidedly unfavorable response in the form of destructive tagging. Although a band of volunteers has since cleaned the graffiti, the mural’s fate remains uncertain.

“I’m very sad that my mural was mostly obliterated with graffiti,” wrote artist Linda Mitchell in a Facebook post dated August 21, just five days after she completed her project.

Commissioned by Atlanta BeltLine, Inc., as part of the Art on the BeltLine program, Rainbow Pupper was Mitchell’s first mural, although the artist’s paintings, collages and sculptural installations have been widely exhibited in Atlanta and elsewhere over the past 30 years of her career.

Across a roughly 9-by-20-feet rectangular concrete surface, Mitchell painted 23 brightly hued, contrasting vertical stripes, each about 10 inches wide in a horizontal rainbow. In the middle of the rainbow she placed a black, stenciled image of a seven-foot-tall dog standing up straight, one paw holding a balloon. The puppy, she says, is based on her former pet mixed beagle, Pucci. 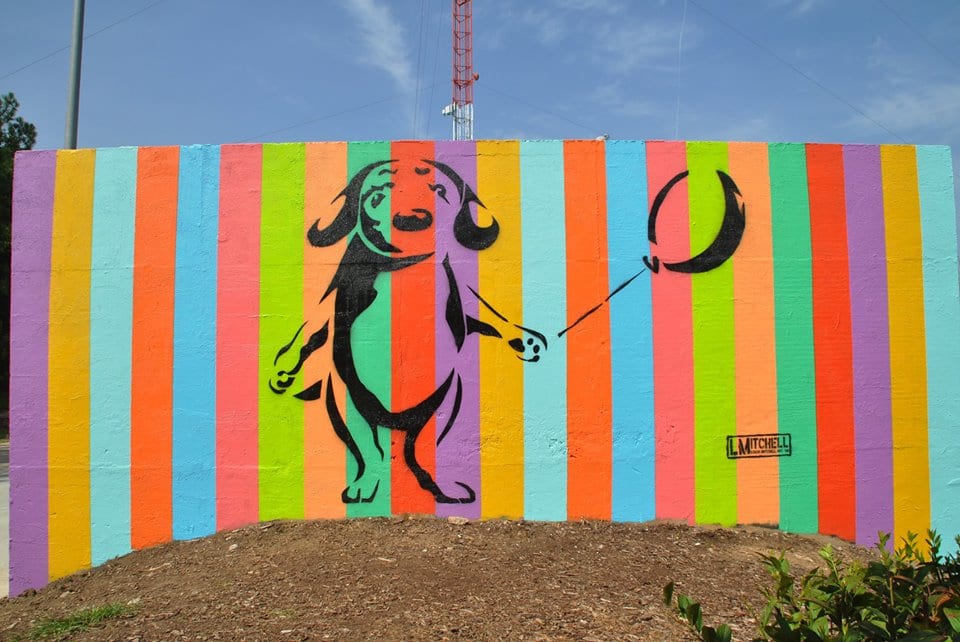 “I just love his expression,” Mitchell says. “He’s got a little soul. You can just tell.”

Historic Fourth Ward Skatepark is one component of a 17-acre park complex on the Atlanta BeltLine, which includes a five-acre pond/flood water retention system, walkways, bridges, splashpad, playground and athletic field. Owned and managed by the City of Atlanta, the park is the centerpiece of a massive revitalization effort, which has transformed the intown district into a symbol of 21st-century gentrification to some. Along with streetscaping, landscaping and public amenities, the area is now defined by upscale residential properties and retail businesses including nearby Ponce City Market.

The skatepark is located approximately on the same spot where once stood a decaying concrete industrial parking lot and loading dock, which was commandeered by skaters in an outlaw occupation more or less tolerated by city officials. When the city-sanctioned skatepark opened in Spring 2011, the occasion was marked by considerable fanfare including an appearance by pro skateboarder Tony Hawk, whose foundation contributed $25,000 toward construction of the facility.

The skatepark’s design drew significantly from input provided by the local skateboarder community, which also includes graffiti artists. From the beginning, the back of the skatepark’s most prominent feature, the vertically sloping wall on which skaters perform trick maneuvers, was recognized as a prime target for street artists. A first mural for the wall, commissioned and completed in 2011 by popular street artist Never, had become faded and tagged over the years. 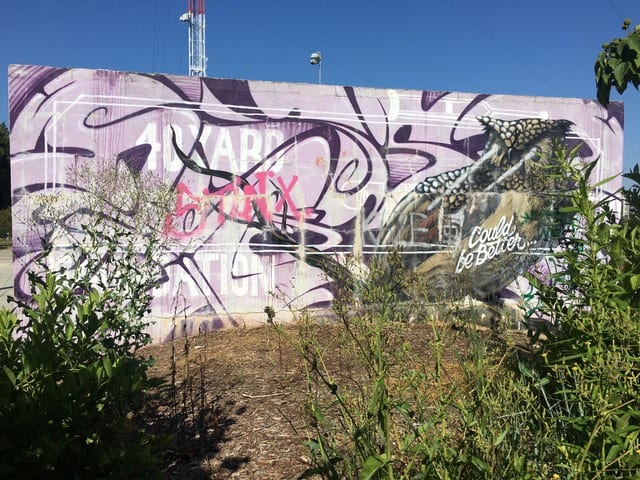 Mitchell’s mural was commissioned to replace Never’s piece from 2011, shown above. Taggers likely saw the new Rainbow Pupper mural as emblematic of the further encroachment of gentrification into the area.

“The average lifespan for a mural is three to five years,” says Miranda Kyle, arts and culture program manager for Atlanta BeltLine, Inc. “This beautiful piece by Never had fallen into disrepair, was marked up with graffiti and needed a face-lift. It was time for a new mural in that space.”

During preparatory discussions, BeltLine officials indicated to Mitchell the likelihood that some members of the skater/graffiti community might find her project unwelcome. Nevertheless, when she was told only a few days after completing her mural that the work had been “tagged” to the point of near obliteration, she was angry and frustrated.

“I expected some tagging but was surprised at the viciousness of what they did,” she says.

While BeltLine officials considered what to do about the defaced mural, including reaching out to the graffiti/skater community, Mitchell moved forward with “Plan B.” She organized a cleaning party on Tuesday, August 28, which was attended by at least two dozen friends. Using soapy water, rags, scrub brushes and a hard-bristle broom, volunteers successfully removed almost all of the tagging, largely thanks to Mitchell’s prior application of a “graffiti shield” product, which manufacturer Sherwin-Williams had donated for the project.

“It turned out way better than I thought it would,” says the artist, who posted on Facebook that the restoration mission was the “best day ever . . . one of the highlights of my life!” 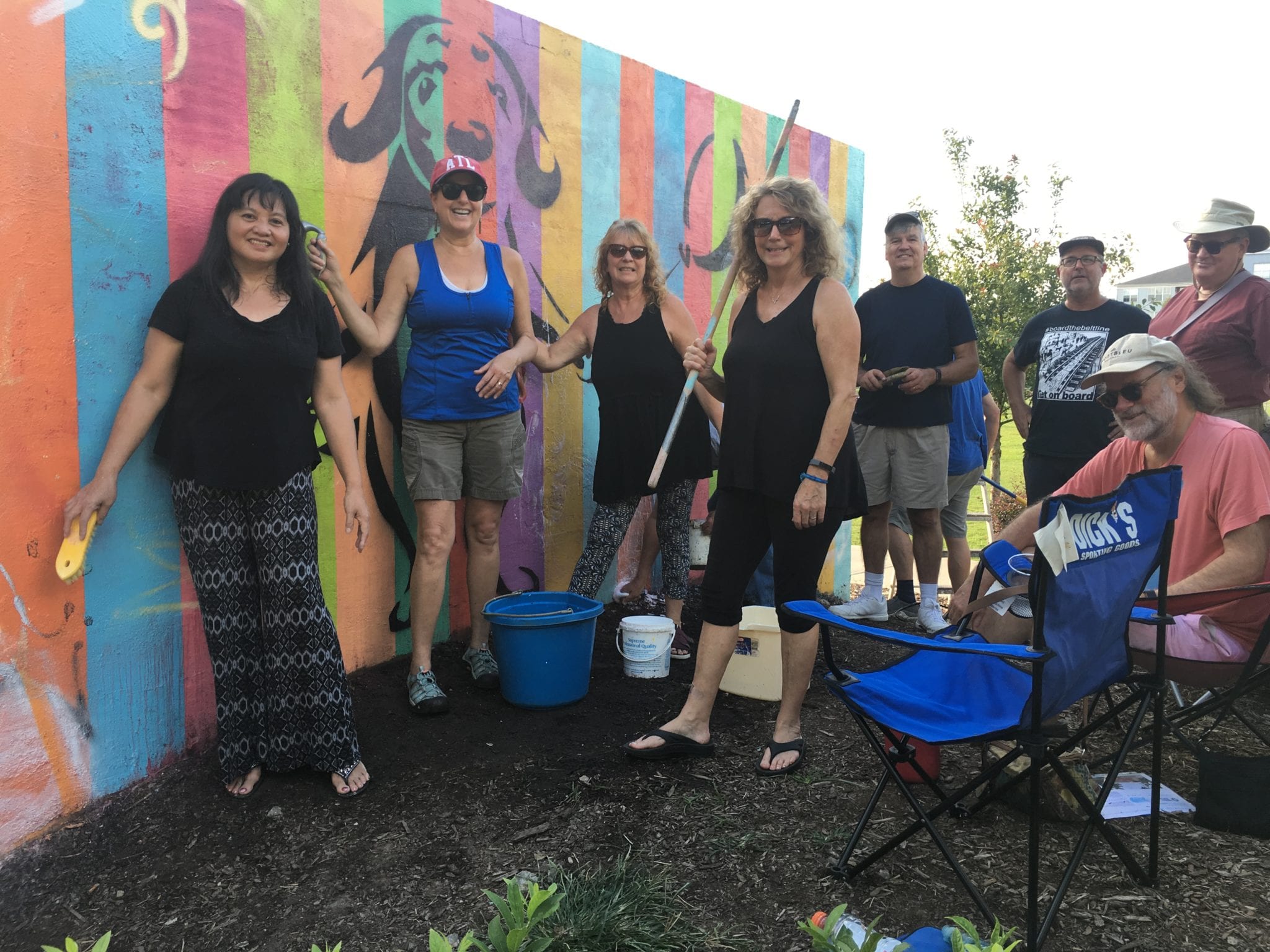 Mitchell then contacted Never (who also goes by Nev), the artist who painted the original mural design. He now lives in Brooklyn, where he continues to create street art as well as commercial graphic design. From the correspondence, Mitchell developed a remarkably different perspective on the incident.

“Long story short, no one thinks you were acting contentiously by painting over that old wall of mine,” wrote Nev to Mitchell in an email. “There’s a lot of politics and hierarchy within the graffiti/street-art scene, and you, unfortunately, got caught up on the wrong end of it.”

Adjacent to the Historic Fourth Ward Skatepark is Freedom Bridge, a span of Freedom Parkway that crosses the Beltline. In addition to its primary function, the underside of the bridge provides shade to walkers and joggers and sometimes serves as a practice studio for musicians.

Referring to the area as “an old graffiti spot” and “a DIY skate spot,” Nev explained that “anything painted there or under Freedom Bridge that isn’t done by an artist with some kind of tie to the graffiti community will be seen as an act of gentrification/class war . . . and it will get vandalized immediately. When the BeltLine project started and luxury condos started popping up all around it, the new people moving in started calling the police on us for being there. Naturally, that created resistance.”

Nev offered to communicate directly with the BeltLine staff to discuss possible resolutions to the dilemma, including traveling to Atlanta to paint a new mural. He also encouraged Mitchell to pursue her original plan to create a standalone Rainbow Pupper painting in a public space.

“Having Never come back and do another mural would be an amazing solution,” says Kyle. “We are talking to all the artists involved to achieve the best outcomes for everyone.”

As of this writing, Rainbow Pupper stands in its refurbished condition, untagged, shining in the bright Atlanta sunshine. While that’s not likely to remain the case for long, Pupper’s progenitor now sees her work in a different light.

“I think everything is moving in a positive direction, so I’m real happy,” she says. “No matter what happens next, the whole experience has been an interesting ride and well worth it.”