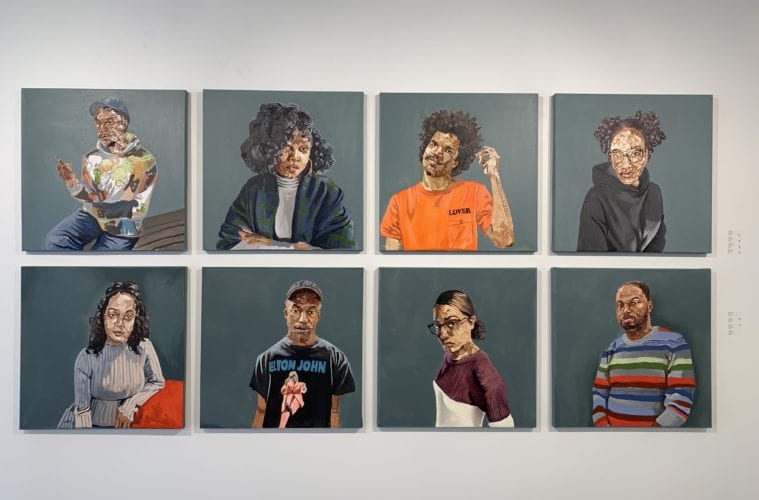 Painter Gerald Lovell uses the impasto layering technique to depict family and friends. Sylvia, Sylvia is named for his grandmother and sister. (Images courtesy of the gallery and the artist)

Q&A: Gerald Lovell on his first solo show at Wish, his family and his inspirations

After clocking more than 750 hours of studio time, Gerald Lovell exhibits his latest paintings in his first solo show at The Gallery | Wish in Little Five Points. Sylvia, Sylvia, up through March 29, brings together impasto portraits of his family and friends. The paintings depict candid moments in which the figure is the focus, emphasized by contrasting texture created in the application of oil paint. ARTS ATL met with Lovell — born in 1992 in Chicago to Puerto Rican and African American parents — to talk about his art and his growth since he took part in the group show TRPL-DBL at Wish in early 2018. His studio is in East Atlanta. ARTS ATL: Why did you shift to documenting more of your family in your work?

Gerald Lovell: It’s a personal choice. In December 2017, my dad passed away, and I wasn’t really that close to him. I had closed myself off from my mom and siblings. I started improving on that and being more present. I thought I should reflect that in my work because that’s what I’m doing already with my friends and peers. My dad and I share the same name, Gerald Lovell Kennedy. Also, my sister and grandmother both have the name Sylvia.

ARTS ATL: Do you paint these portraits as a kind of social commentary?

Lovell: My work is really centered in creating honest depictions of the people I’m around. In doing that, I feel like I’m affirming them and their existence. I feel like I’m capturing moments of self-satisfaction. Being a black creative, there’s a big emphasis on creating work that has social commentary. So it’s almost turning that on its head. As I’m making more of this work, being asked about it, I’m starting to observe themes being present that weren’t originally my intention.

ARTS ATL: Your new work has a heightened level of detail, and many of the pieces have grown in scale. What prompted these changes? What are the challenges or benefits of painting on a larger scale? Lovell: I’ve learned a sense of self-discipline. Also, realizing when there’s a task that I need to do, like an eight-foot painting, it has to get done without excuses. So if I have to paint it in my living room, whatever it takes to make it happen, I’ve learned not to create excuses.

Visiting museums more, researching other artists and exposing myself to artists working on a larger scale made me want to make work on a larger scale. In terms of what I’m already doing, it wasn’t so difficult to transfer from this size to that size. The images present themselves. Painting itself is grand. There’s a prestige to it. It ties into me wanting to highlight these moments in time that are just as prestigious.

ARTS ATL: Your background is graphic design. At what point did you turn to painting?

Lovell: [Atlanta artist] Jurell Cayetano convinced me I could paint. In fall 2014, he had just graduated from the School of Visual Arts in New York, and I really admired his work. So after hearing him say that to me, I made my first self-portrait. That was also when I first used the palette-knife technique. I tried my first one and kept doing it. Originally it was a style preference. In many ways it still is, but it also works poetically. It draws viewers in and has this appeal.

ARTS ATL: Who are your artistic influences?

I like MOCA GA. It makes me think every time I go in there. I also like ZuCot Gallery. I like MINT. And of course the High, but everybody goes to the High. Also, Black Art in America, which is in Columbus.

ARTS ATL: What do you do in your spare time?

Lovell: Painting truly gets the best of me. After finishing the work for this show, I’m actually going to kick back and take care of me. [While] making the work for this show, I had poor eating habits and poor sleeping habits, but I don’t feel too bad about it because I got the job done. In my spare time, I play Super Smash Bros. with my friends. If anybody ever wants to play, let me know. I’m putting my Toon Link up against anybody. Just hit me up on Instagram [@geraldlovell].